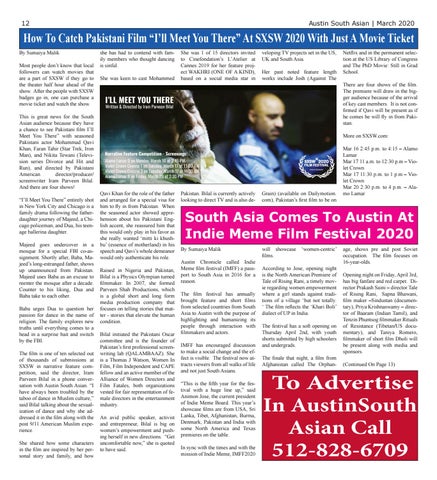 How To Catch Pakistani Film “I’ll Meet You There” At SXSW 2020 With Just A Movie Ticket By Sumaiya Malik Most people don’t know that local followers can watch movies that are a part of SXSW if they go to the theater half hour ahead of the show. After the people with SXSW badges go in, one can purchase a movie ticket and watch the show. This is great news for the South Asian audience because they have a chance to see Pakistani film I’ll Meet You There” with seasoned Pakistani actor Mohammad Qavi Khan, Faran Tahir (Star Trek, Iron Man), and Nikita Tewani (Television series Divorce and Hit and Run), and directed by Pakistani American director/producer/ screenwriter Iram Parveen Bilal. And there are four shows! “I’ll Meet You There” entirely shot in New York City and Chicago is a family drama following the fatherdaughter journey of Majeed, a Chicago policeman, and Dua, his teenage ballerina daughter. Majeed goes undercover in a mosque for a special FBI co-assignment. Shortly after, Baba, Majeed’s long-estranged father, shows up unannounced from Pakistan. Majeed uses Baba as an excuse to reenter the mosque after a decade. Counter to his liking, Dua and Baba take to each other. Baba urges Dua to question her passion for dance in the name of religion. The family explores new truths until everything comes to a head in a surprise bait and switch by the FBI. The film is one of ten selected out of thousands of submissions at SXSW in narrative feature competition, said the director, Iram Parveen Bilal in a phone conversation with Austin South Asian. “I have always been troubled by the taboo of dance in Muslim culture,” said Bilal talking about the sexualization of dance and why she addressed it in the film along with the post 9/11 American Muslim experience. She shared how some characters in the film are inspired by her personal story and family, and how

she has had to contend with family members who thought dancing is sinful. She was keen to cast Mohammed

She was 1 of 15 directors invited to Cinefondation’s L’Atelier at Cannes 2019 for her feature project WAKHRI (ONE OF A KIND), based on a social media star in

veloping TV projects set in the US, UK and South Asia. Her past noted feature length works include Josh (Against The

Netflix and in the permanent selection at the US Library of Congress and The PhD Movie: Still in Grad School. There are four shows of the film. The premiere will draw in the bigger audience because of the arrival of key cast members. It is not confirmed if Qavi will be present as if he comes he will fly in from Pakistan. More on SXSW.com:

Qavi Khan for the role of the father and arranged for a special visa for him to fly in from Pakistan. When the seasoned actor showed apprehension about his Pakistani English accent, she reassured him that this would only play in his favor as she really wanted ‘mitti ki khushbu’ (essence of motherland) in his speech and Qavi’s whole demeanor would only authenticate his role. Raised in Nigeria and Pakistan, Bilal is a Physics Olympian turned filmmaker. In 2007, she formed Parveen Shah Productions, which is a global short and long form media production company that focuses on telling stories that matter - stories that elevate the human condition. Bilal initiated the Pakistani Oscar committee and is the founder of Pakistan’s first professional screenwriting lab (QALAMBAAZ). She is a Thomas J Watson, Women In Film, Film Independent and CAPE fellow and an active member of the Alliance of Women Directors and Film Fatales, both organizations vested for fair representation of female directors in the entertainment industry. An avid public speaker, activist and entrepreneur, Bilal is big on women’s empowerment and pushing herself in new directions. “Get uncomfortable now,” she is quoted to have said.

Pakistan. Bilal is currently actively looking to direct TV and is also de-

Grain) (available on Dailymotion. com), Pakistan’s first film to be on

South Asia Comes To Austin At Indie Meme Film Festival 2020 By Sumaiya Malik Austin Chronicle called Indie Meme film festival (IMFF) a passport to South Asia in 2016 for a reason. The film festival has annually brought feature and short films from selected countries from South Asia to Austin with the purpose of highlighting and humanizing its people through interaction with filmmakers and actors. IMFF has encouraged discussion to make a social change and the effect is visible. The festival now attracts viewers from all walks of life and not just South Asians. “This is the fifth year for the festival with a huge line up,” said Animon Jose, the current president of Indie Meme Board. This year’s showcase films are from USA, Sri Lanka, Tibet, Afghanistan, Burma, Denmark, Pakistan and India with some North America and Texas premieres on the table. In sync with the times and with the mission of Indie Meme, IMFF2020

According to Jose, opening night is the North American Premiere of Tale of Rising Rani, a timely movie regarding women empowerment where a girl stands against traditions of a village ‘but not totally. ‘ The film reflects the ‘Khari Boli’ dialect of UP in India. The festival has a soft opening on Thursday April 2nd, with youth shorts submitted by high schoolers and undergrads. The finale that night, a film from Afghanistan called The Orphan-