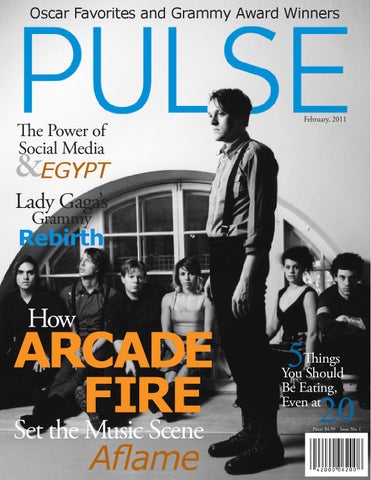 The Power of Social Media

Things You Should Be Eating, Even at

Who they are, where they came from, and how they took the music industry by storm with their Grammy win.

hock and awe were written on the faces of the Canadian rock collective Arcade Fire’s faces as they stepped up to the microphone to accept their record of the year Grammy. They weren’t the only ones who were suprised. They took the prestigious award over big names like Lady Gaga, Katy Perry, Eminem and Lady Antebellum. Their win represent a growing presence in a business long dominated by the major record labels. This victory also left fans in shock, leaving many asking “Who is Arcade Fire?” Arcade Fire is truly a rags-to-riches story. The seven member band takes turns on sixteen different instruments including guitar, drums, bass guitar, piano, violin, viola, cello, double bass, xylophone, glockenspiel, keyboard, French horn, accordion, harp, mandolin and hurdy-gurdy, which gives the band its comunique sound. They got their start in Montreal in 2001 when Win Butler and Josh Deu formed the