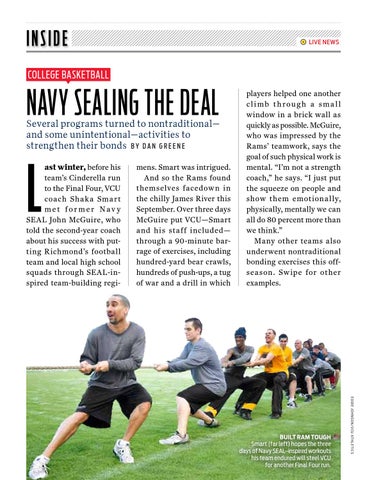 mens. Smart was intrigued. And so the Rams found t hemselves facedow n in the chilly James River this September. Over three days ­McGuire put VCU—Smart a nd his sta f f ­i ncluded— through a 90‑minute­ barrage of exercises, including hundred-yard bear crawls, hundreds of push-ups, a tug of war and a drill in which

players helped one ­a nother climb t hrough a sma ll window in a brick wall as ­quickly as possible. ­McGuire, who was impressed by the Rams’ teamwork, says the goal of such physical work is mental. “I’m not a strength coach,” he says. “I just put the squeeze on people and show t hem emot iona lly, physically, mentally we can all do 80 percent more than we think.” Many other teams also under­w ent nontraditional bonding ­e xercises this offsea son. Sw ipe for ot her ­e xamples.

Fine Dining On the last night of a weeklong European tour Villanova cruised through the canals of Amsterdam in a glass-roofed boat—with no passengers outside the team’s 30-person travel group—while enjoying a formal, white-tablecloth dinner. “It was almost romantic,” says coach Jay Wright. “I was very impressed with the guys’ maturity, the relationships that were built.’’

Brawling Georgetown’s tour of China turned ugly when the Hoyas and the Bayi Military Rockets tangled in a bench-clearing melee. But for a team searching for an identity after three starters’ departures, the silver lining in this incident was a newfound camaraderie. As senior guard Jason Clark told the AP, “Now we know that when we do go through things, that everybody has each other’s back.’’

Rowing Fran Dunphy had Temple players hit the Schuylkill River before sunrise with the crew team. The Owls squeezed their oversized frames into shells to learn about communication and the cooperative effort needed to row as a group. They also gained an appreciation for a different sport. As sophomore guard Aaron Brown tweeted, “I respect them dudes because it wouldn’t be me out there every morning!”