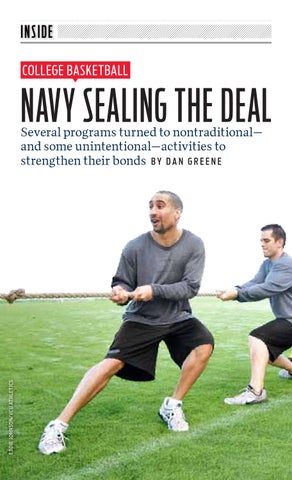 ast winter, before his team’s Cinderella run to the Final Four, VCU coach Shaka Smart met former Nav y SEA L John ­M cGuire, who told the ­s econd-year coach about his success with putting R ichmond’s football team and local high school squads t hrough SE A L-inspired team-building regimens. Smart was intrigued. And so the Rams found themselves facedown in the chilly James River this September. Over three days ­McGuire put VCU—Smart and his staff ­included—through a 90‑minute­barrage of exercises, including hundred-yard bear crawls, hundreds of push-ups, a tug of war and a ---------------------------------------------------- S C R O L L ----------------------------------------------------drill in which players helped one ­a nother climb through a small window in a brick wall as ­quickly as possible. ­McGuire, who was impressed by the Rams’ teamwork, says the goal of such physical work is mental. “I’m not a strength coach,” he says. “I just put the squeeze on people and show them emotionally, physically, mentally we can all do 80 percent more than we think.” Many other teams also under­went nontraditional bonding ­e xercises this off-season. Swipe for other ­e xamples.

inside College basketball Camping For the third straight October, Marquette coach Buzz Williams packed his team onto yellow school buses for three days of old-school training camp. This year’s destination was Camp MiniKani, a 30-minute drive from Milwaukee. Players practiced in elementary school gyms and slept in TV-less cabins with sparse cellphone reception, entertaining themselves with games of Catch Phrase. Fine Dining On the last night of a weeklong European tour Villanova cruised through the canals of Amsterdam in a glass-roofed boat—with no passengers outside the team’s 30-person travel group—while enjoying a formal, white-tablecloth dinner. “It was almost romantic,” says coach Jay Wright. “I was very impressed with the guys’ maturity, the relationships that were built.’’ Brawling Georgetown’s tour of China turned ugly when the Hoyas and the Bayi Military Rockets tangled in a bench-clearing melee. But for a team searching for an identity after three starters’ departures, the silver lining in this incident was a newfound camaraderie. As senior guard Jason Clark told the AP, “Now we know that when we do go through things, that everybody has each other’s back.’’ Rowing Fran Dunphy had Temple players hit the Schuylkill River before sunrise with the crew team. The Owls squeezed their oversized frames into shells to learn about communication and the cooperative effort needed to row as a group. They also gained an appreciation for a different sport. As sophomore guard Aaron Brown tweeted, “I respect them dudes because it wouldn’t be me out there every morning!”

Threepointer Catch Casper Ware if you can. Long Beach State’s 5&#39; 10&quot; senior point guard may be hard to find on TV, but he is a dynamic athlete who averaged 24.6 points and 5.3 assists in the 49ers’ first three games. He had 28 points and six assists in LBSU’s upset win at Pitt on Nov. 16. . . . UCLA has had a disastrous start. After losses to Loyola Marymount and Middle Tennessee State by a combined 31 points, Bruins coach Ben Howland suspended his best player, 6&#39; 8&quot; junior forward Reeves Nelson, for one game for conduct detrimental to the team. . . . Florida’s guards get most of the media attention, but the Gators’ offense runs through Patric Young. The 6&#39; 9&quot;, 245-pound sophomore, a much-improved offensive player, had double doubles in two of his first three games, including 14 points and 12 boards in last week’s loss at Ohio State.