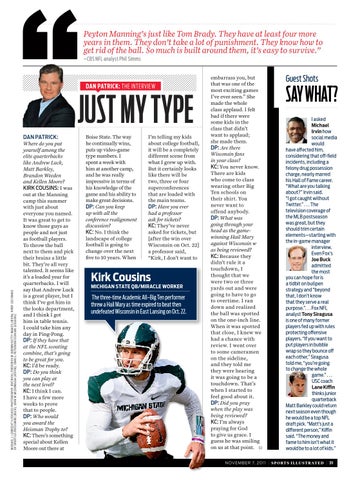 Peyton Manning’s just like Tom Brady. They have at least four more years in them. They don’t take a lot of punishment. They know how to get rid of the ball. So much is built around them, it’s easy to survive.” —CBS NFL analyst Phil Simms

Where do you put yourself among the elite quarterbacks like Andrew Luck, Matt Barkley, Brandon Weeden and Kellen Moore? Kirk Cousins: I was out at the Manning camp this summer with just about everyone you named. It was great to get to know those guys as people and not just as football players. To throw the ball next to them and pick their brains a little bit. They’re all very talented. It seems like it’s a loaded year for quarterbacks. I will say that Andrew Luck is a great player, but I think I’ve got him in the looks department, and I think I got him in table tennis. I could take him any day in Ping-Pong. DP: If they have that at the NFL scouting combine, that’s going to be great for you. KC: I’d be ready. DP: Do you think you can play at the next level? KC: I think I can. I have a few more weeks to prove that to people. DP: Who would you award the Heisman Trophy to? KC: There’s something special about Kellen Moore out there at

Boise State. The way he continually wins, puts up video-game type numbers. I spent a week with him at another camp, and he was really impressive in terms of his knowledge of the game and his ability to make great decisions. DP: Can you keep up with all the conference realignment discussion? KC: No. I think the landscape of college football is going to change over the next five to 10 years. When

I’m telling my kids about college football, it will be a completely different scene from what I grew up with. But it certainly looks like there will be two, three or four superconferences that are loaded with the main teams. DP: Have you ever had a professor ask for tickets? KC: They’ve never asked for tickets, but [after the win over Wisconsin on Oct. 22] a professor said, “Kirk, I don’t want to

embarrass you, but that was one of the most exciting games I’ve ever seen.” She made the whole class applaud. I felt bad if there were some kids in the class that didn’t want to applaud; she made them. DP: Are there Wisconsin fans in your class? KC: You never know. There are kids who come to class wearing other Big Ten schools on their shirt. You never want to offend anybody. DP: What was going through your head as the gamewinning Hail Mary against Wisconsin w as being reviewed? KC: Because they didn’t rule it a touchdown, I thought that we were two or three yards out and were going to have to go to overtime. I ran down and realized the ball was spotted on the one-inch line. When it was spotted that close, I knew we had a chance with review. I went over to some cameramen on the sideline, and they told me they were hearing it was going to be a touchdown. That’s when I started to feel good about it. DP: Did you pray when the play was being reviewed? KC: I’m always praying for God to give us grace. I guess he was smiling on us at that point. ±

Say What? I asked Michael Irvin how social media would have affected him, considering that off-field incidents, including a felony drug possession charge, nearly marred his Hall of Fame career. “What are you talking about?” Irvin said. “I got caught without Twitter.” . . . The television coverage of the MLB postseason was great, but they should trim certain elements—starting with the in-game manager interview. Even Fox’s Joe Buck admitted the most you can hope for is a tidbit on bullpen strategy and “beyond that, I don’t know that they serve a real purpose.”. . . Fox NFL analyst Tony Siragusa is one of many former players fed up with rules protecting offensive players. “If you want to put players in bubble wrap so they bounce off each other,” Siragusa told me, “you’re going to change the whole game.” . . . USC coach Lane Kiffin thinks junior quarterback Matt Barkley could return next season even though he would be a top NFL draft pick. “Matt’s just a different person,” Kiffin said. “The money and fame to him isn’t what it would be to a lot of kids.”