Faces in the Crowd - Print Version 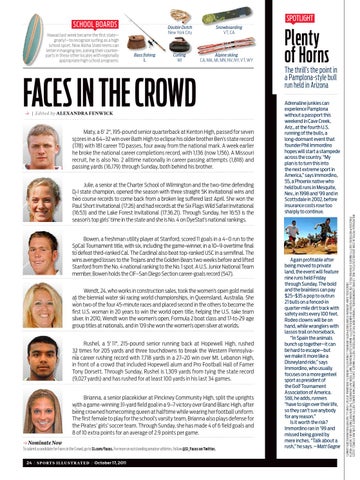 Faces in the crowd  | Edited by Alexandra Fenwick

Bowen, a freshman utility player at Stanford, scored 11 goals in a 4–0 run to the SoCal Tournament title, with six, including the game-winner, in a 10–9 overtime final &lt; to defeat third-ranked Cal. The Cardinal also beat top-ranked USC in a semifinal. The wins avenged losses to the Trojans and the Golden Bears two weeks before and lifted Stanford from the No. 4 national ranking to the No. 1 spot. A U.S. Junior National Team member, Bowen holds the CIF–San Diego Section career-goals record (547). Wendt, 24, who works in construction sales, took the women’s open gold medal at the biennial water ski racing world championships, in Queensland, Australia. She &lt; won two of the four 45-minute races and placed second in the others to become the first U.S. woman in 20 years to win the world open title, helping the U.S. take team silver. In 2010, Wendt won the women’s open, Formula 2 boat class and 17-to-29 age group titles at nationals, and in ’09 she won the women’s open silver at worlds. Rushel, a 5&#39; 11&quot;, 215-pound senior running back at Hopewell High, rushed 32 times for 205 yards and three touchdowns to break the Western Pennsylva&lt; nia career rushing record with 7,718 yards in a 27–20 win over Mt. Lebanon High, in front of a crowd that included Hopewell alum and Pro Football Hall of Famer Tony Dorsett. Through Sunday, Rushel is 1,309 yards from tying the state record (9,027 yards) and has rushed for at least 100 yards in his last 34 games. Brianna, a senior placekicker at Pinckney Community High, split the uprights with a ­game-winning 31-yard field goal in a 9–7 victory over Grand Blanc High, after &lt; being crowned homecoming queen at halftime while wearing her football uniform. The first female to play for the school’s varsity team, Brianna also plays defense for the Pirates’ girls’ soccer team. Through Sunday, she has made 4 of 6 field goals and 8 of 10 extra points for an average of 2.9 points per game.  Nominate Now To submit a candidate for Faces in the Crowd, go to SI.com/faces. For more on outstanding amateur athletes, follow @SI_Faces on Twitter. 24  |  S p o r t s I l l u s t r at e D  |  October 17, 2011

The thrill’s the point in a Pamplona-style bull run held in Arizona Adrenaline junkies can experience Pamplona without a passport this weekend in Cave Creek, Ariz., at the fourth U.S. running of the bulls, a long-dormant event that founder Phil Immordino hopes will start a stampede across the country. “My plan is to turn this into the next extreme sport in America,” says Immordino, 55, a Phoenix native who held bull runs in Mesquite, Nev., in 1998 and ’99 and in Scottsdale in 2002, before insurance costs rose too sharply to continue.

Again profitable after being moved to private land, the event will feature nine runs held Friday through Sunday. The bold and the brainless can pay $25–$35 a pop to outrun 21 bulls on a fenced-in quarter-mile dirt track with safety exits every 100 feet. Rodeo clowns will be on hand, while wranglers with lassos trail on horseback. “In Spain the animals bunch up together—it can be hard to escape—but we make it more like a Disneyland ride,” says Immordino, who usually focuses on a more genteel sport as president of the Golf Tournament Association of America. Still, he adds, runners “have to sign over their life, so they can’t sue anybody for any reason.” Is it worth the risk? Immordino ran in ’99 and missed being gored by mere inches. “Talk about a rush,” he says. —Matt Gagne

Julie, a senior at the Charter School of Wilmington and the two-time defending D-I state champion, opened the season with three straight 5K invitational wins and &lt; two course records to come back from a broken leg suffered last April. She won the Paul Short Invitational (17:26) and had records at the Six Flags Wild Safari Invitational (16:53) and the Lake Forest Invitational (17:36.21). Through Sunday, her 16:53 is the season’s top girls’ time in the state and she is No. 4 on DyeStat’s national rankings.

Faces in the Crowd - Print Version