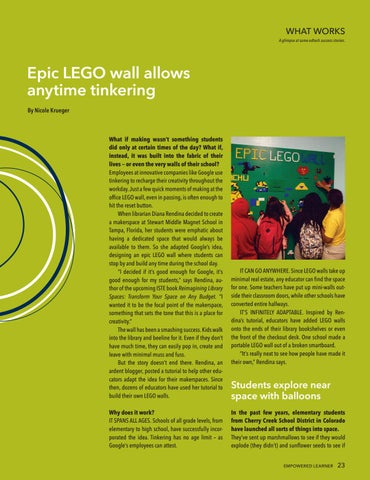 WHAT WORKS A glimpse at some edtech success stories.

What if making wasn’t something students did only at certain times of the day? What if, instead, it was built into the fabric of their lives — or even the very walls of their school? Employees at innovative companies like Google use tinkering to recharge their creativity throughout the workday. Just a few quick moments of making at the office LEGO wall, even in passing, is often enough to hit the reset button. When librarian Diana Rendina decided to create a makerspace at Stewart Middle Magnet School in Tampa, Florida, her students were emphatic about having a dedicated space that would always be available to them. So she adapted Google’s idea, designing an epic LEGO wall where students can stop by and build any time during the school day. “I decided if it’s good enough for Google, it’s good enough for my students,” says Rendina, author of the upcoming ISTE book Reimagining Library Spaces: Transform Your Space on Any Budget. “I wanted it to be the focal point of the makerspace, something that sets the tone that this is a place for creativity.” The wall has been a smashing success. Kids walk into the library and beeline for it. Even if they don’t have much time, they can easily pop in, create and leave with minimal muss and fuss. But the story doesn’t end there. Rendina, an ardent blogger, posted a tutorial to help other educators adapt the idea for their makerspaces. Since then, dozens of educators have used her tutorial to build their own LEGO walls. Why does it work? IT SPANS ALL AGES. Schools of all grade levels, from elementary to high school, have successfully incorporated the idea. Tinkering has no age limit – as Google’s employees can attest.

IT CAN GO ANYWHERE. Since LEGO walls take up minimal real estate, any educator can find the space for one. Some teachers have put up mini-walls outside their classroom doors, while other schools have converted entire hallways. IT’S INFINITELY ADAPTABLE. Inspired by Rendina’s tutorial, educators have added LEGO walls onto the ends of their library bookshelves or even the front of the checkout desk. One school made a portable LEGO wall out of a broken smartboard. “It’s really neat to see how people have made it their own,” Rendina says.

Students explore near space with balloons In the past few years, elementary students from Cherry Creek School District in Colorado have launched all sorts of things into space. They’ve sent up marshmallows to see if they would explode (they didn’t) and sunflower seeds to see if EMPOWERED LEARNER 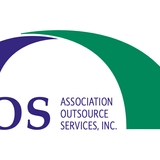