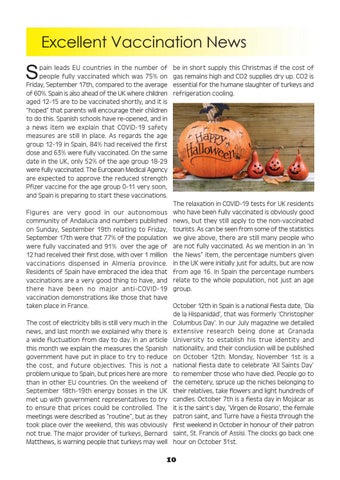 pain leads EU countries in the number of people fully vaccinated which was 75% on Friday, September 17th, compared to the average of 60%. Spain is also ahead of the UK where children aged 12-15 are to be vaccinated shortly, and it is “hoped” that parents will encourage their children to do this. Spanish schools have re-opened, and in a news item we explain that COVID-19 safety measures are still in place. As regards the age group 12-19 in Spain, 84% had received the first dose and 63% were fully vaccinated. On the same date in the UK, only 52% of the age group 18-29 were fully vaccinated. The European Medical Agency are expected to approve the reduced strength Pfizer vaccine for the age group 0-11 very soon, and Spain is preparing to start these vaccinations. Figures are very good in our autonomous community of Andalucía and numbers published on Sunday, September 19th relating to Friday, September 17th were that 77% of the population were fully vaccinated and 91% over the age of 12 had received their first dose, with over 1 million vaccinations dispensed in Almería province. Residents of Spain have embraced the idea that vaccinations are a very good thing to have, and there have been no major anti-COVID-19 vaccination demonstrations like those that have taken place in France. The cost of electricity bills is still very much in the news, and last month we explained why there is a wide fluctuation from day to day. In an article this month we explain the measures the Spanish government have put in place to try to reduce the cost, and future objectives. This is not a problem unique to Spain, but prices here are more than in other EU countries. On the weekend of September 18th-19th energy bosses in the UK met up with government representatives to try to ensure that prices could be controlled. The meetings were described as “routine”, but as they took place over the weekend, this was obviously not true. The major provider of turkeys, Bernard Matthews, is warning people that turkeys may well

be in short supply this Christmas if the cost of gas remains high and CO2 supplies dry up. CO2 is essential for the humane slaughter of turkeys and refrigeration cooling.

The relaxation in COVID-19 tests for UK residents who have been fully vaccinated is obviously good news, but they still apply to the non-vaccinated tourists. As can be seen from some of the statistics we give above, there are still many people who are not fully vaccinated. As we mention in an ‘In the News” item, the percentage numbers given in the UK were initially just for adults, but are now from age 16. In Spain the percentage numbers relate to the whole population, not just an age group. October 12th in Spain is a national fiesta date, ‘Día de la Hispanidád’, that was formerly ‘Christopher Columbus Day’. In our July magazine we detailed extensive research being done at Granada University to establish his true identity and nationality, and their conclusion will be published on October 12th. Monday, November 1st is a national fiesta date to celebrate ‘All Saints Day’ to remember those who have died. People go to the cemetery, spruce up the niches belonging to their relatives, take flowers and light hundreds of candles. October 7th is a fiesta day in Mojácar as it is the saint’s day, ‘Virgen de Rosario’, the female patron saint, and Turre have a fiesta through the first weekend in October in honour of their patron saint, St. Francis of Assisi. The clocks go back one hour on October 31st.