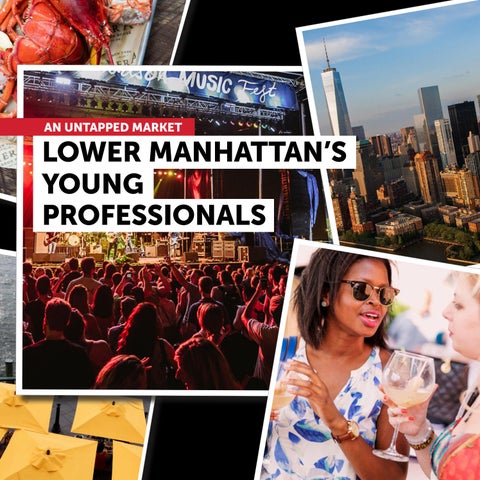 A BEACON FOR YOUNG PROFESSIONALS Astoria

LOWER MANHATTAN YOUNG PROFESSIONALS Lower Manhattan’s residential population continues to grow and expand its influence on the real estate market south of Chambers Street. Already accepted as a popular area with families, Lower Manhattan has also emerged as a location of choice for young, professionals and is one of the youngest areas in all of New York City. The median age in Lower Manhattan is 32, about five years younger than Manhattan’s median age. With strong buying power and plentiful leisure spending, this key demographic can increasingly drive Lower Manhattan’s rapidly transforming retail and dining scene. The Downtown Alliance contracted with Audience Research &amp; Analysis to conduct a survey of residents ages 18-44 in order to understand the dining and entertainment preferences and habits of this growing audience of young residents with a preference for 24/7 neighborhoods. The survey revealed insights that will help local businesses better market to this demographic and also attract new dining and entertainment concepts to 2 Lower Manhattan.

LOWER MANHATTAN AMONG TOP NEIGHBORHOODS FOR GROWTH IN NONFAMILY HOUSEHOLDS, SINCE 2000

World Trade Center and east of Broadway from Fulton Street to Exchange Place, where 12 (or more than half) of the top 20 largest residential buildings in Lower Manhattan are located. This includes buildings such as the 650-unit 2 Gold Street, the 576-unit 200 Water Street and the 398-unit 90 Washington Street. Top Nonfamily Household Growth Citywide Since 2000 – Lower Manhattan has more than doubled in terms of nonfamily households since 2000, making it one of the 13 fastest-growing neighborhoods out of 195 citywide. This rate of growth ranks it among neighborhoods like Williamsburg, Chelsea and Greenpoint. In total, 54% of Lower Manhattan’s overall households are characterized as being home to roommates or singles as compared to a 45% share within Manhattan overall. A Population Set to Grow - Currently, there are more than 18,780 rental units in Lower Manhattan, up 142% from 2000. More than 2,500 are expected to be added by 2019. With continued growth in the rental inventory, the population of 18-44 year-olds is expected to rise.

These population totals are from the ACS 2014, 5-Year Estimates, Table B01001: Sex by Age, which estimates that Lower Manhattan’s total population is nearly 49,000. The U.S. Census Bureau has undercounted Lower Manhattan’s population and the Downtown Alliance estimates that the real population is higher, especially as available census data lags by about two years. Downtown Jersey City includes the Historic Downtown and waterfront areas, including areas surrounding the Exchange Place, Newport and Grove Street NJ PATH stations. Williamsburg includes the neighborhood known as North Side-South Side, generally north of the Williamsburg Bridge, west of the Brooklyn Queens Expressway, and south of Manhattan Avenue.

YOUNG PEOPLE IN LOWER MANHATTAN DINE OUT, HAVE DRINKS OR SEEK ENTERTAINMENT 21 OUT OF 30 DAYS A MONTH ON AVERAGE

DOWNTOWN IS HUNGRY &amp; GROWING LOWER MANHATTAN’S YOUNG PEOPLE GO OUT FOR DINNER, DRINKS OR ENTERTAINMENT ON AVERAGE 16 OUT OF 30 DAYS A MONTH This includes dinner at fine dining and full-service, casual restaurants as well as weekend brunch, bars/lounges and entertainment venues.

Lower Manhattan also has a strong contingent of students living and/or studying south of Chambers Street, many of whom likely fall within this key demographic. This neighborhood is flush with higher and continuing education institutions — an estimated 53,000 full and part-time students in 25 colleges, institutes, academies and boot camps traverse the neighborhood during the course of the year. While the majority commute to Lower Manhattan and increase the daytime population in the district, more than 2,400 students make their home in four Pace University residence halls on their campus in Lower Manhattan.

IMPRESSIVE BUYING POWER &amp; ABUNDANT LEISURE SPENDING This growing demographic south of Chambers Street has equally impressive spending power. Lower Manhattan’s young professionals embrace a work-hard, play-hard lifestyle and choose to spend their disposable income on dining and entertainment. High Incomes &amp; Education Levels - With top employment sectors in FIRE and Professional Services, such as Advertising, Media and Technology, the median household income for Lower Manhattan’s young professionals is $161,7393. This is more than 1.6 times the Manhattan average and the highest of any neighborhood south of 59th Street. It tops neighborhoods with similar populations of young urbanites, including Williamsburg, Hoboken, Chelsea and Union Square. This influential group of Lower Manhattan consumers also boasts high levels of education -- more than 83% of this age group has a bachelor’s degree, including more than 32% that have a graduate or professional degree.

Buying Power – High disposable income and preference for spending leisure time outside the home yields real buying power. The Downtown Alliance’s survey revealed that Lower Manhattan’s young professionals spend nearly $1,000 per month on average on dining out as well as entertainment, such as comedy clubs, bowling or live music.4 Frequent Diners &amp; Entertainment Seekers - They seek dining, bar and entertainment experiences frequently. On average, these residents go out to dinner, weekend brunch, bar or entertainment venues 16 times each month, with dining at full-service casual restaurants for dinner and enjoying drinks with friends at bars and lounges topping that list. On average, this population frequented bars and lounges at least five times in a given month and ate in full-service, casual restaurants about five times during that same period.

Source: ACS 2014 5-Year Estimates, Table B19049 Median Household Income in the Past 12 Months (in 2014 Inflation Adjusted Dollars) By Age of Householder, data only available for the 25-44 age group.

I n this survey, entertainment was exclusively defined as activities such as live music in bars, lounges or other small venues, comedy clubs, bowling, movies, etc. &amp; excluded large sporting events, theaters or performing arts. This statistic includes spending at restaurants for dinner or weekend brunch, bars/lounges and entertainment venues.

LOWER MANHATTAN’S ROBUST APPETITE FOR DINING OUT &amp; ENTERTAINMENT Demand Close to Home - Lower Manhattan’s expanding culinary landscape currently attracts this area’s young, engaged consumers. There are opportunities to keep more spending and activity in Lower Manhattan. These residents with active lifestyles and significant purchasing power are relative newcomers to the area, with an average length of residence around three years. However, they also display a commitment and interest in dining and going out in their neighborhood more frequently. Keeping Spending South of Chambers Street - Lower Manhattan’s 30,000-plus young professionals currently spend an estimated $356 million annually on dining and entertainment experiences, but 55% of this spending power leaves the neighborhood. For example, residents reported that their demand for entertainment led them to leave the neighborhood about 73% of the time. They stayed close to home most often for dinner and drinks, about 48% of the time. Brunch is popular on the weekends with this group; on average residents brunched at least two times in a given month, but sought brunch locations north of Chambers more than half the time (56%).

55% of the $365 Million Spent annually by Lower Manhattan’s young residents is spent outside of the neighborhood. 6

Lower Manhattan can take advantage of this engaged audience right in itsvs.own in Lowermanhattan Other Neighborhoods - Under 45 Years backyard to further enrich its expanded dining, beverage and entertainment scene. From survey results, the Downtown Alliance discovered the following areas of opportunity for existing, as well as, future dining and entertainment establishments:

• Neighborhood Experience &amp; Casual but Cool Atmosphere – Young locals preferred full-service, casual restaurants and visited frequently – 86% had eaten at one within the last 30 days. Overall, they are seeking a mix of casual ambiance Average Percentage of Going Out (Dinner, Drinks, Brunch &amp; Entertainment) and a chef-driven food experience. They liked friendly, approachable service but in Lowermanhattan vs. Other Neighborhoods - Under 45 Years also within a unique, entrepreneurial concept. Locals were looking forward to Dinner &amp; Drinks many of the well-known, fine dining restaurants opening soon but also cited the need for more neighborhood anchors like the future restaurant by David Chang in the Seaport District, Westville or the already-popular Dead Rabbit. Building owners in Lower Manhattan and elsewhere in the city are beginning to place more casual, food-driven restaurants in their buildings as amenities to attract tenants and as part of a branding strategy. The results of this survey demonstrate that there is a strong rationale to further this trend.

• Weekend Options - The most popular evenings out for Lower Manhattan residents were Fridays and Saturdays. In a given month, 84% had been to a lounge or bar with friends and 73% had eaten dinner at a full-service, casual restaurant on at least one Friday or Saturday evening.

• Varied &amp; Destination Brunch Restaurants - Lower Manhattan residents reported that they went out to brunch frequently – 76% of residents had gone to brunch at least once in the past 30 days. However, these frequent brunch-goers left Lower Manhattan more often than not, presenting the opportunity for greater brunch variety in the neighborhood. • Dining Open Later - Lower Manhattan is no longer a 9-5 neighborhood and serving younger residents who tend to eat later can further cement this status. This group likes to dine and entertain later in the evenings, with more than 52% reporting that they preferred going to dinner or drinks at 8 P.M. or later on weeknights. Weekends after 8 P.M. were another popular time for these residents, with nearly seven out of ten residents preferring to dine out at 8 P.M. or later on Friday, Saturday or Sunday nights.

AVERAGE PERCENTAGE OF GOING OUT IN 55.9% 72.7% LOWER MANHATTAN VS. OTHER NEIGHBORHOODS RESIDENTS UNDER 45 YEARS

• Entertainment Options &amp; Multifaceted Venues – Residents indicated that they left the neighborhood nearly three out of four times for entertainment options. They expressed demand for more small-scale entertainment options like comedy clubs or destinations with live music. Potential options could complement the future Ronald O. Perelman Center for Performing Arts at the World Trade Center, which will also draw new visitors to the neighborhood. Local residents voiced excitement about multiactivity venues, such as places that incorporate concepts like games, outdoor space or a lounge atmosphere under one roof to provide greater variety in Lower Manhattan.

A residential survey highlighting Lower Manhattan as a neighborhood of choice for young professionals in New York City, as well as ways to capture residents’ robust appetite for dining out and entertainment. 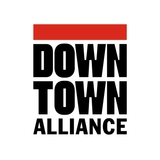