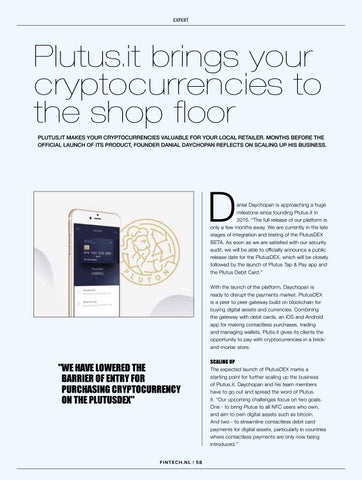 Plutus.it brings your cryptocurrencies to the shop floor PLUTUS.IT MAKES YOUR CRYPTOCURRENCIES VALUABLE FOR YOUR LOCAL RETAILER. MONTHS BEFORE THE OFFICIAL LAUNCH OF ITS PRODUCT, FOUNDER DANIAL DAYCHOPAN REFLECTS ON SCALING UP HIS BUSINESS.

anial Daychopan is approaching a huge milestone since founding Plutus.it in 2015. “The full release of our platform is only a few months away. We are currently in the late stages of integration and testing of the PlutusDEX BETA. As soon as we are satisfied with our security audit, we will be able to officially announce a public release date for the PlutusDEX, which will be closely followed by the launch of Plutus Tap & Pay app and the Plutus Debit Card.” With the launch of the platform, Daychopan is ready to disrupt the payments market. PlutusDEX is a peer to peer gateway build on blockchain for buying digital assets and currencies. Combining the gateway with debit cards, an iOS and Android app for making contactless purchases, trading and managing wallets, Plutis.it gives its clients the opportunity to pay with cryptocurrencies in a brickand-mortar store.

SCALING UP The expected launch of PlutusDEX marks a starting point for further scaling up the business of Plutus.it. Daychopan and his team members have to go out and spread the word of Plutus. it. “Our upcoming challenges focus on two goals. One - to bring Plutus to all NFC users who own, and aim to own digital assets such as bitcoin. And two - to streamline contactless debit card payments for digital assets, particularly in countries where contactless payments are only now being introduced.” 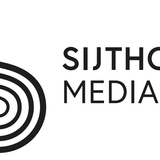