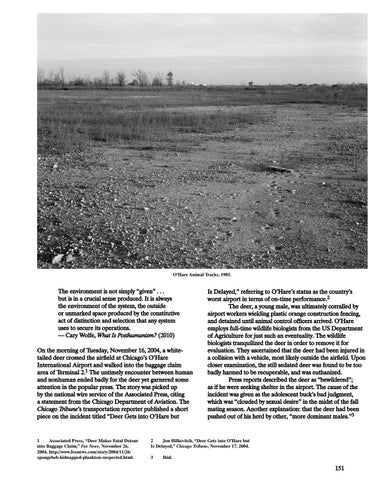 The environment is not simply “given” . . . but is in a crucial sense produced. It is always the environment of the system, the outside or unmarked space produced by the constitutive act of distinction and selection that any system uses to secure its operations. — Cary Wolfe, What Is Posthumanism? (2010) On the morning of Tuesday, November 16, 2004, a whitetailed deer crossed the airfield at Chicago’s O’Hare International Airport and walked into the baggage claim area of Terminal 2.1 The untimely encounter between human and nonhuman ended badly for the deer yet garnered some attention in the popular press. The story was picked up by the national wire service of the Associated Press, citing a statement from the Chicago Department of Aviation. The Chicago Tribune’s transportation reporter published a short piece on the incident titled “Deer Gets into O’Hare but

Is Delayed,” referring to O’Hare’s status as the country’s worst airport in terms of on-time performance.2 The deer, a young male, was ultimately corralled by airport workers wielding plastic orange construction fencing, and detained until animal control officers arrived. O’Hare employs full-time wildlife biologists from the US Department of Agriculture for just such an eventuality. The wildlife biologists tranquilized the deer in order to remove it for evaluation. They ascertained that the deer had been injured in a collision with a vehicle, most likely outside the airfield. Upon closer examination, the still sedated deer was found to be too badly harmed to be recuperable, and was euthanized. Press reports described the deer as “bewildered”; as if he were seeking shelter in the airport. The cause of the incident was given as the adolescent buck’s bad judgment, which was “clouded by sexual desire” in the midst of the fall mating season. Another explanation: that the deer had been pushed out of his herd by other, “more dominant males.”3 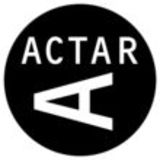