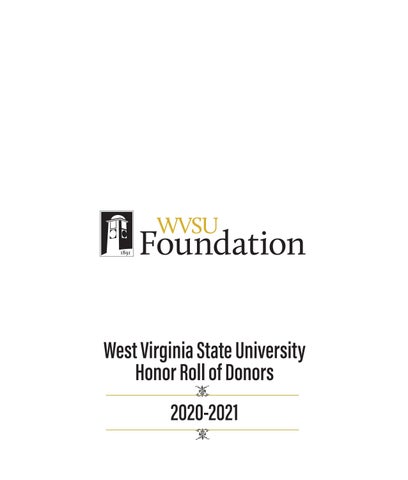 Message from the WVSU Foundation The WVSU Foundation Board of Directors is proud to partner with West Virginia State University to raise and manage funds for the benefit and support of the university and its students. As we reflect on the unprecedented 2020-2021 fiscal year, would like to express our profound gratitude to those who have given to sustain and support our beloved West Virginia State and to make the successes of the past year possible. Dr. Sami M. Ghareeb

Through your support, you are helping to create a brighter future for current and future WVSU students, create access for those who are underrepresented in high-demand professions such as STEM fields, healthcare and business, and to help drive economic development in the State of West Virginia and beyond.

OCTOBER 5, 2018 APRIL 4, 2014 ERICKSON ALUMNI CENTER Now, more than ever, access to education is a key to opportunity for our students and a critical means of preparing the next generation of leaders and EDGEWOOD CLUB innovators who will help heal andCOUNTRY transform our nation as we emerge from Patricia J. Schumann

the pandemic. As you review the information on these pages, please join us in considering what you can do to Step up for State and make 2021-2022 our best year yet! Remember, It Starts at State!

Chair, WVSU Foundation Board of Directors