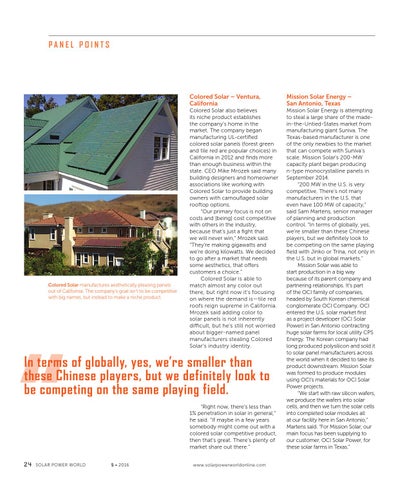 Colored Solar manufactures aesthetically pleasing panels out of California. The company’s goal isn’t to be competitive with big names, but instead to make a niche product.

Colored Solar also believes its niche product establishes the company’s home in the market. The company began manufacturing UL-certified colored solar panels (forest green and tile red are popular choices) in California in 2012 and finds more than enough business within the state. CEO Mike Mrozek said many building designers and homeowner associations like working with Colored Solar to provide building owners with camouflaged solar rooftop options. “Our primary focus is not on costs and [being] cost competitive with others in the industry, because that’s just a fight that we will never win,” Mrozek said. “They’re making gigawatts and we’re doing kilowatts. We decided to go after a market that needs some aesthetics, that offers customers a choice.” Colored Solar is able to match almost any color out there, but right now it’s focusing on where the demand is—tile red roofs reign supreme in California. Mrozek said adding color to solar panels is not inherently difficult, but he’s still not worried about bigger-named panel manufacturers stealing Colored Solar’s industry identity.

Mission Solar Energy is attempting to steal a large share of the madein-the-Untied-States market from manufacturing giant Suniva. The Texas-based manufacturer is one of the only newbies to the market that can compete with Suniva’s scale. Mission Solar’s 200-MW capacity plant began producing n-type monocrystalline panels in September 2014. “200 MW in the U.S. is very competitive. There’s not many manufacturers in the U.S. that even have 100 MW of capacity,” said Sam Martens, senior manager of planning and production control. “In terms of globally, yes, we’re smaller than these Chinese players, but we definitely look to be competing on the same playing field with Jinko or Trina, not only in the U.S. but in global markets.” Mission Solar was able to start production in a big way because of its parent company and partnering relationships. It’s part of the OCI family of companies, headed by South Korean chemical conglomerate OCI Company. OCI entered the U.S. solar market first as a project developer (OCI Solar Power) in San Antonio contracting huge solar farms for local utility CPS Energy. The Korean company had long produced polysilicon and sold it to solar panel manufacturers across the world when it decided to take its product downstream. Mission Solar was formed to produce modules using OCI’s materials for OCI Solar Power projects. “We start with raw silicon wafers, we produce the wafers into solar cells, and then we turn the solar cells into completed solar modules all at our facility here in San Antonio,” Martens said. “For Mission Solar, our main focus has been supplying to our customer, OCI Solar Power, for these solar farms in Texas.”

In terms of globally, yes, we’re smaller than these Chinese players, but we definitely look to be competing on the same playing field. “Right now, there’s less than 1% penetration in solar in general,” he said. “If maybe in a few years somebody might come out with a colored solar competitive product, then that’s great. There’s plenty of market share out there.” 24