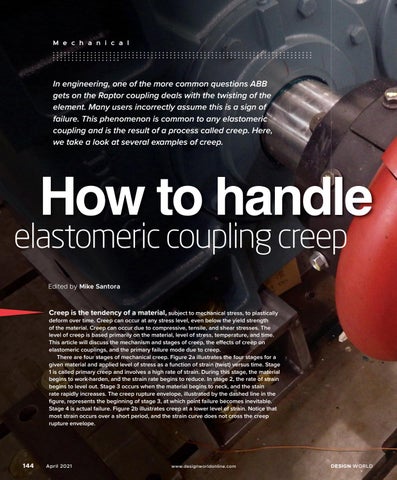 In engineering, one of the more common questions ABB gets on the Raptor coupling deals with the twisting of the element. Many users incorrectly assume this is a sign of failure. This phenomenon is common to any elastomeric coupling and is the result of a process called creep. Here, we take a look at several examples of creep.

Creep is the tendency of a material, subject to mechanical stress, to plastically deform over time. Creep can occur at any stress level, even below the yield strength of the material. Creep can occur due to compressive, tensile, and shear stresses. The level of creep is based primarily on the material, level of stress, temperature, and time. This article will discuss the mechanism and stages of creep, the effects of creep on elastomeric couplings, and the primary failure mode due to creep. There are four stages of mechanical creep. Figure 2a illustrates the four stages for a given material and applied level of stress as a function of strain (twist) versus time. Stage 1 is called primary creep and involves a high rate of strain. During this stage, the material begins to work-harden, and the strain rate begins to reduce. In stage 2, the rate of strain begins to level out. Stage 3 occurs when the material begins to neck, and the stain rate rapidly increases. The creep rupture envelope, illustrated by the dashed line in the figure, represents the beginning of stage 3, at which point failure becomes inevitable. Stage 4 is actual failure. Figure 2b illustrates creep at a lower level of strain. Notice that most strain occurs over a short period, and the strain curve does not cross the creep rupture envelope.