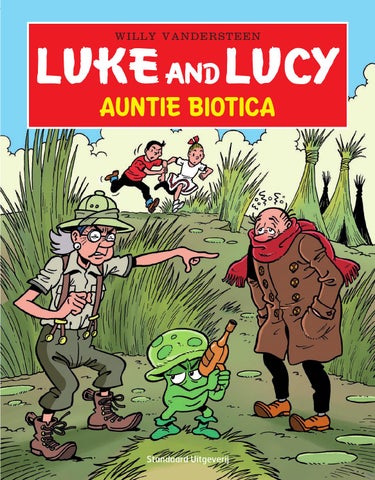 How do you feel?

And my nose is running!

Ow! With this fever, I can’t tell what’s worse, the headache or the muscle pains!

Sure, laugh at the sick man … cough cough! It’s just the ﬂu! It’s not going to kill you!

Cooper’s getting ready to ﬂy the coop! This ﬂu clipped his wings!

Call the doctor, Sybil, before it’s too late!

Man up, big guy! I’ll tuck you in and give you something for your fever, and you just get some rest!

Not ﬁne enough for me! A sick Cooper needs the best!

No food?! Are you planning on starving me to death?! Calm down, Cooper!

Lucky I know someone who’ll take me seriously! Who?

Just leave me alone! I can take care of myself! Fine, then! Let’s go, kids!

The woman who raised me when Daddy moved to Africa!

What are you, the butler?

I’ll have a nice cup of tea with exactly two teaspoons of sugar and three drops of lemon! And make it snappy!

What are Taking your temperature! With a you doing? nose like yours, this is the best way to check!

Oh, my, my! You’re burning up! I know just what you need! Antibiotics!

I’m sorry, nurse. My diagnosis is that Mr. Cooper has the ﬂu…

Nonsense! Antibiotics are a wonder drug!

My father was shot in the leg in World War II! If they hadn’t given him antibiotics, he would have died!

Madam, your father’s wound was certainly infected! Antibiotics are indicated for bacterial infections, but only then!

You quack! This is scandalous! I know what I have to do!

… and the ﬂu is a virus, so antibiotics won’t help!

Not then! Years later!

Leftover antibiotics from the medicine cabinet?

We’ll have to go to Dragon Island!

When the storm ﬁnally passed, they found themselves off the coast of a small island!

If they were good 10 years ago, they’re good now!

Never heard of it!

Many years ago, my husband was the captain of a cargo ship!

A member of the crew was injured during the storm, and the wound was badly infected!

But of course my hubby told me everything!

And you think those islanders can help Cooper?

Burp! I don’t feel any better!

Hmmm. These pills must not be strong enough!

On one of his voyages, a terrible storm blew them far off course!

The islanders saved his life, but they insisted the crew keep the island’s existence a secret!

Absolutely! According to my husband, they have the strongest antibiotics in the world!

Of course! How else can they cure him? Now, if you’ll excuse us!...

She doesn’t want any witnesses!

Ha! Then she doesn’t know Lucy very well! I know her….

What the – ? This fever’s got me seeing things … you look like Luke and Lucy! WHAT ?!

We can help! We’ve got loads of experience!

The anti-seasickness pills are in the big suitcase!

What are you two doing on my boat!? This is a dangerous mission … it’s no place for kids!

Not the sort of experi- Oh, shut up! ence you meant, right?

But it’s ﬁne for You little brat! What am I sick men and old women, of course! supposed to do with the two of you?!

Is that Dragon Island?

It is! And they’ve got the antibiotics that’ll cure you!

I’ll fetch the medicine and bring it back to the boat! Luke, you come with me!

We can put in at that little stretch of beach! Good idea!

The ground here seems strange, too!

According to my husband’s notes, their village is in the middle of the island!

What about me? Can I go? Somebody has to stay here and look after my poor Coopie!

This is a weird plant! Leave that alone, boy! Let’s explore the island!

Ah! Finally! That must be them!

You silly human-type I think I can understand peoples! Why you their mushroom language! come here?!

Me Auntie Biotica! Me come get medicine for me sickie nephew!

We under silly attack by Streppies!!!

Me get them with Sillyshooter!

Get silly weapons! Must keep them from silly enemy!

THE BATTLE IS SOON OVER, AND THE STREPPIES ARE DEFEATED… Little human-type child saved King Silly!

Them silly the We’re happy to help! Who were those monsters? Streppies! Very dangerous bacteria!

But we got Sillyshooters that ﬁre antibiotic ray! So we silly stronger than Streppies!

Wonderful! May I borrow one of your, em, Sillyshooters?

Not silly possible! Only Sillies able to silly shoot Sillyshooters!

Then one of you will have to come out to my boat to cure Cooper! He needs your help!

No, him sickie Why? Him got silly sickie! I mean, he bitten by a has the ﬂu! Streppie?

We’ll see about that! Take this!

We’re faster than they are!

Once we get to the boat, we’ll be safe!

Let the Silly go! His friends are furious!

Unless I do something dumb like trip over a rock!

Where is that dratted boy? It’s time to go!

No way! Cooper’s getting their antibiotic, and that’s that!

Ow, I sprained my ankle! And here they come! I’d better hide!

I’ll have to leave him behind! He must have decided to stay with the mushrooms!

We silly too late! They silly gone!

But where little human-type boy? He silly not in boat!

What’ve you got there?!

If I can wake him up, that is!

It’s a Silly! He’s got medicine for Cooper!

Am I supposed to swallow him before or after a meal?

He’s going to shoot you with an antibiotic ray!

He stayed with the mushrooms! What?! I don’t believe you!

I’ll get changed and go bring him back!

Why? I could use some help here!

Now what? The ground’s shaking!

The island’s rising out of the sea! But that’s … that’s …

… that’s a dragon! The island’s some kind of monster!

Oh, dragon, you are our silly hero! Save King Silly from the human-type people!

Not a good time for a visit!

Not a funny joke, missy!

My goodness! What sort of creature is that?! Amazing the things you ﬁnd in the ocean!

The island is a dragon! What are you doing with that starter’s pistol?!

This is how you take care of a sick man?

Shooting, duh! That thing’s heading right for us!

So much noise! My aching head!

Out of my way!

Hey, you! Leave my friend alone!

I’ve got to get the boat to safety! If only the motor still works!

…get a kick out of this!

Thanks a lot, Luke! It’s the thought that counts, but you’re not really helping!

Okay, this is a problem! I’m way too far from shore!

I’ll have to swim for it, and hope for the best!

Old human-type I don’t care what happens to lady escape with me! Lucy’ll never make it! King Silly! Not good! We trade for Luke person!

Sillies care what happen! If Streppies get Sillies’ weapon, Sillies be silly doomed!

I know, I know! We have to turn to port!

We’ll be okay! I’ve steered us onto a sandbar! That’s ﬁne while the tide’s out, but when it comes in…

If you don’t shoot your antibiotic ray at Cooper, I’ll show you how old I am!

But that silly useless! Cooper have silly ﬂu! That a virus! Me only can kill silly bacteria!

First we’ll sink and then we’ll drown! And I’ve got the ﬂu!

Where silly this? Aha!

No more backtalkia! If you don’t help Cooper right now, I’ll make mushroom soup out of you!

Old human-type lady! What do you mean, old?!

No, thanks! I couldn’t eat a bite!

King Silly had enough! Find little boat and go back to Dragon Island!

I made it! And just in time … I’m exhausted!

Cooper? … Auntie Biotica? … Anybody home? … Where are they?

And the dinghy’s gone! At least I can stay dry!

If I didn’t know Lucy, I’d think this was a fairy tale!

What’s that!? Bacteria? A dragon?!

The boat’s on a sandbar and the tide’s coming in! Once it lifts off the sand, it’ll sink!

Hello, Wilbur? I need you at the lab right away!

The Sillies are so busy ﬁghting, they’ve forgotten about me!

The Streppies’ canoes! Just what I need!

Good thing I’ve got my penknife!

Now to ﬁnd Lucy and the boat!

A few more minutes and I’ll be back in the water! Good thing those sharks are there!

They’ll eat me before I drown!

This is the end!

Soon our silly dragon get sick!

Get lost, you ugly beast!

Aw, shucks, it was nothing!

We have to help the Sillies! Their dragon’s in danger!

Why we guard-um human people?

Came to say hello while Prof looks for place to land!

Saw friends on island. Jumped out of Gyrocopter!

Thanks to human-type children for saving Sillies, but is too late!

All human-type people’s fault! Why you come here? We’re very sorry, but...

You silly guilty! Must pay for killing dragon! Get them!

They call this gratitude?!

I can’t see the boat anywhere!

If only Luke and Lucy are okay!

That critter looks as sick as I feel!

Dragon coughing! End is near!

Landing would be too dangerous! He’s got a serious lung infection! Good thing Lucy warned me about the giant bacteria!

Quick, Wilbur! There’s a hypodermic pistol in the ﬁrst-aid kit! We can shoot the dragon full of my super-strength antibiotic!

Aim for head? Moving target too hard to hit! Got better idea! Fly a little south!

AAARRGHH!! That should do it!

Not bad enough silly dragon sick! Now they silly shoot him in tushie!

Creature If this strain of bacteria looks is resistant to my sicker, not super-antibiotic, I don’t better! know what else to do!

Of course! The Wait! Silly professor gave him dragon better! some medicine!

OUR FRIENDS REMAIN ON THE ISLAND UNTIL THE DRAGON IS FULLY RECOVERED, THEN LEAVE FOR HOME!

Yeah, and the dragon, too! Hmmph!

I’m glad the old beast is better! No thanks to you! If I’d just stayed home in bed, I would have recovered much faster! Ingrate!

But he’s right! Fine, ﬁne, only use antibiotics when a doctor prescribes them!

And gather up any leftover medications from your medicine chest… … and return them to the drugstore, yes, I get it!

Luckily, I know something much better!

Science can’t always come up with new wonder drugs, so we have to use the ones we have wisely!

I must have caught it from you! No antibiotics for a virus, now!

The care of Nurse Cooper!