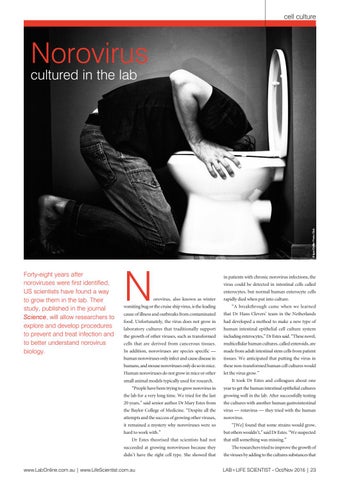 cultured in the lab

Forty-eight years after noroviruses were first identified, US scientists have found a way to grow them in the lab. Their study, published in the journal Science, will allow researchers to explore and develop procedures to prevent and treat infection and to better understand norovirus biology.

in patients with chronic norovirus infections, the virus could be detected in intestinal cells called enterocytes, but normal human enterocyte cells orovirus, also known as winter

rapidly died when put into culture.

vomiting bug or the cruise ship virus, is the leading

“A breakthrough came when we learned

cause of illness and outbreaks from contaminated

that Dr Hans Clevers’ team in the Netherlands

food. Unfortunately, the virus does not grow in

had developed a method to make a new type of

the growth of other viruses, such as transformed

cells that are derived from cancerous tissues.

In addition, noroviruses are species specific —

made from adult intestinal stem cells from patient

human noroviruses only infect and cause disease in

tissues. We anticipated that putting the virus in

humans, and mouse noroviruses only do so in mice.

these non-transformed human cell cultures would

Human noroviruses do not grow in mice or other

It took Dr Estes and colleagues about one

“People have been trying to grow norovirus in

year to get the human intestinal epithelial cultures

the lab for a very long time. We tried for the last

growing well in the lab. After successfully testing

the cultures with another human gastrointestinal

the Baylor College of Medicine. “Despite all the

virus — rotavirus — they tried with the human

attempts and the success of growing other viruses,

it remained a mystery why noroviruses were so hard to work with.” Dr Estes theorised that scientists had not

“[We] found that some strains would grow, but others wouldn’t,” said Dr Estes. “We suspected that still something was missing.”

succeeded at growing noroviruses because they

The researchers tried to improve the growth of

didn’t have the right cell type. She showed that

the viruses by adding to the cultures substances that