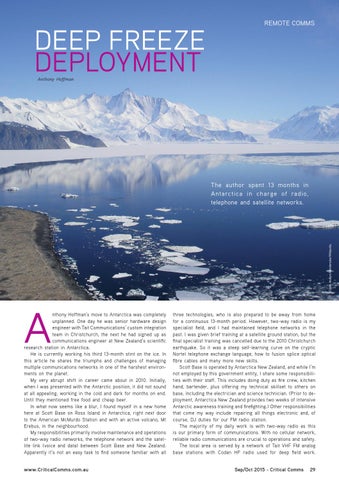 The author spent 13 months in Antarctica in charge of radio, telephone and satellite networks.

nthony Hoffman’s move to Antarctica was completely unplanned. One day he was senior hardware design engineer with Tait Communications’ custom integration team in Christchurch, the next he had signed up as communications engineer at New Zealand’s scientific research station in Antarctica. He is currently working his third 13-month stint on the ice. In this article he shares the triumphs and challenges of managing multiple communications networks in one of the harshest environments on the planet. My very abrupt shift in career came about in 2010. Initially, when I was presented with the Antarctic position, it did not sound at all appealing, working in the cold and dark for months on end. Until they mentioned free food and cheap beer. In what now seems like a blur, I found myself in a new home here at Scott Base on Ross Island in Antarctica, right next door to the American McMurdo Station and with an active volcano, Mt Erebus, in the neighbourhood. My responsibilities primarily involve maintenance and operations of two-way radio networks, the telephone network and the satellite link (voice and data) between Scott Base and New Zealand. Apparently it’s not an easy task to find someone familiar with all

three technologies, who is also prepared to be away from home for a continuous 13-month period. However, two-way radio is my specialist field, and I had maintained telephone networks in the past. I was given brief training at a satellite ground station, but the final specialist training was cancelled due to the 2010 Christchurch earthquake. So it was a steep self-learning curve on the cryptic Nortel telephone exchange language, how to fusion splice optical fibre cables and many more new skills. Scott Base is operated by Antarctica New Zealand, and while I’m not employed by this government entity, I share some responsibilities with their staff. This includes doing duty as fire crew, kitchen hand, bartender, plus offering my technical skillset to others on base, including the electrician and science technician. (Prior to deployment, Antarctica New Zealand provides two weeks of intensive Antarctic awareness training and firefighting.) Other responsibilities that come my way include repairing all things electronic and, of course, DJ duties for our FM radio station. The majority of my daily work is with two-way radio as this is our primary form of communications. With no cellular network, reliable radio communications are crucial to operations and safety. The local area is served by a network of Tait VHF FM analog base stations with Codan HF radio used for deep field work.