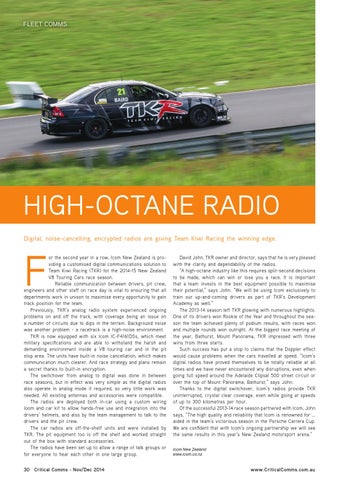 or the second year in a row, Icom New Zealand is providing a customised digital communications solution to Team Kiwi Racing (TKR) for the 2014-15 New Zealand V8 Touring Cars race season. Reliable communication between drivers, pit crew, engineers and other staff on race day is vital to ensuring that all departments work in unison to maximise every opportunity to gain track position for the team. Previously, TKR’s analog radio system experienced ongoing problems on and off the track, with coverage being an issue on a number of circuits due to dips in the terrain. Background noise was another problem - a racetrack is a high-noise environment. TKR is now equipped with six Icom IC-F4161DSs, which meet military specifications and are able to withstand the harsh and demanding environment inside a V8 touring car and in the pit stop area. The units have built-in noise cancellation, which makes communication much clearer. And race strategy and plans remain a secret thanks to built-in encryption. The switchover from analog to digital was done in between race seasons, but in effect was very simple as the digital radios also operate in analog mode if required, so very little work was needed. All existing antennas and accessories were compatible. The radios are deployed both in-car using a custom wiring loom and car kit to allow hands-free use and integration into the drivers’ helmets, and also by the team management to talk to the drivers and the pit crew. The car radios are off-the-shelf units and were installed by TKR. The pit equipment too is off the shelf and worked straight out of the box with standard accessories. The radios have been set up to allow a range of talk groups or for everyone to hear each other in one large group.

David John, TKR owner and director, says that he is very pleased with the clarity and dependability of the radios. “A high-octane industry like this requires split-second decisions to be made, which can win or lose you a race. It is important that a team invests in the best equipment possible to maximise their potential,” says John. “We will be using Icom exclusively to train our up-and-coming drivers as part of TKR’s Development Academy as well.” The 2013-14 season left TKR glowing with numerous highlights. One of its drivers won Rookie of the Year and throughout the season the team achieved plenty of podium results, with races won and multiple rounds won outright. At the biggest race meeting of the year, Bathurst, Mount Panorama, TKR impressed with three wins from three starts. Such success has put a stop to claims that the Doppler effect would cause problems when the cars travelled at speed. “Icom’s digital radios have proved themselves to be totally reliable at all times and we have never encountered any disruptions, even when going full speed around the Adelaide Clipsal 500 street circuit or over the top of Mount Panorama, Bathurst,” says John. Thanks to the digital switchover, Icom’s radios provide TKR uninterrupted, crystal clear coverage, even while going at speeds of up to 300 kilometres per hour. Of the successful 2013-14 race season partnered with Icom, John says, “The high quality and reliability that Icom is renowned for … aided in the team’s victorious season in the Porsche Carrera Cup. We are confident that with Icom’s ongoing partnership we will see the same results in this year’s New Zealand motorsport arena.” Icom New Zealand www.icom.co.nz