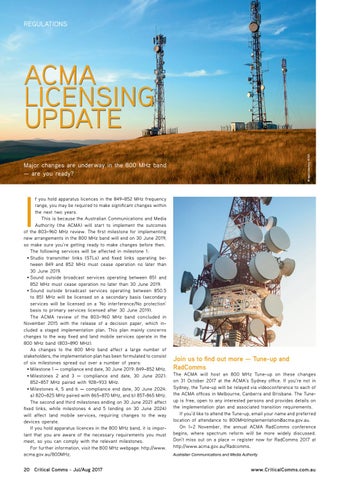 ACMA LICENSING UPDATE Major changes are underway in the 800 MHz band — are you ready?

Join us to find out more — Tune-up and RadComms The ACMA will host an 800 MHz Tune-up on these changes on 31 October 2017 at the ACMA’s Sydney office. If you’re not in Sydney, the Tune-up will be relayed via videoconference to each of the ACMA offices in Melbourne, Canberra and Brisbane. The Tuneup is free, open to any interested persons and provides details on the implementation plan and associated transition requirements. If you’d like to attend the Tune-up, email your name and preferred location of attendance to 800MHzImplementation@acma.gov.au. On 1–2 November, the annual ACMA RadComms conference begins, where spectrum reform will be more widely discussed. Don’t miss out on a place — register now for RadComms 2017 at http://www.acma.gov.au/Radcomms. Australian Communications and Media Authority