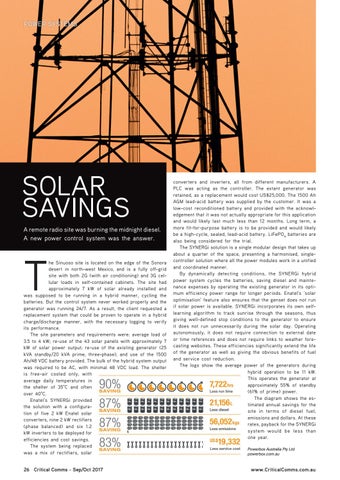 SOLAR SAVINGS A remote radio site was burning the midnight diesel. A new power control system was the answer.

he Sinuoso site is located on the edge of the Sonora desert in north-west Mexico, and is a fully off-grid site with both 2G (with air conditioning) and 3G cellular loads in self-contained cabinets. The site had approximately 7 kW of solar already installed and was supposed to be running in a hybrid manner, cycling the batteries. But the control system never worked properly and the generator was running 24/7. As a result, the client requested a replacement system that could be proven to operate in a hybrid charge/discharge manner, with the necessary logging to verify its performance. The site parameters and requirements were: average load of 3.5 to 4 kW; re-use of the 43 solar panels with approximately 7 kW of solar power output; re-use of the existing generator (25 kVA standby/20 kVA prime, three-phase); and use of the 1500 Ah/48 VDC battery provided. The bulk of the hybrid system output was required to be AC, with minimal 48 VDC load. The shelter is free-air cooled only, with average daily temperatures in the shelter of 35°C and often over 40°C. Enatel’s SYNERGi provided the solution with a configuration of five 2 kW Enatel solar converters, nine 2 kW rectifiers (phase balanced) and six 1.2 kW inverters to be deployed for efficiencies and cost savings. The system being replaced was a mix of rectifiers, solar

converters and inverters, all from different manufacturers. A PLC was acting as the controller. The extant generator was retained, as a replacement would cost US$25,000. The 1500 Ah AGM lead-acid battery was supplied by the customer. It was a low-cost reconditioned battery and provided with the acknowledgement that it was not actually appropriate for this application and would likely last much less than 12 months. Long term, a more fit-for-purpose battery is to be provided and would likely be a high-cycle, sealed, lead-acid battery. LiFePO 4 batteries are also being considered for the trial. The SYNERGi solution is a single modular design that takes up about a quarter of the space, presenting a harmonised, singlecontroller solution where all the power modules work in a unified and coordinated manner. By dynamically detecting conditions, the SYNERGi hybrid power system cycles the batteries, saving diesel and maintenance expenses by operating the existing generator in its optimum efficiency power range for longer periods. Enatel’s ‘solar optimisation’ feature also ensures that the genset does not run if solar power is available. SYNERGi incorporates its own selflearning algorithm to track sunrise through the seasons, thus giving well-defined stop conditions to the generator to ensure it does not run unnecessarily during the solar day. Operating autonomously, it does not require connection to external date or time references and does not require links to weather forecasting websites. These efficiencies significantly extend the life of the generator as well as giving the obvious benefits of fuel and service cost reduction. The logs show the average power of the generators during hybrid operation to be 11 kW. This operates the generator at approximately 55% of standby (61% of prime) power. The diagram shows the estimated annual savings for the site in terms of diesel fuel, emissions and dollars. At these rates, payback for the SYNERGi system would be less than one year. Powerbox Australia Pty Ltd powerbox.com.au