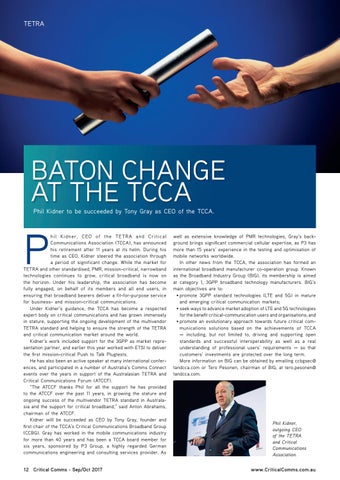 BATON CHANGE AT THE TCCA Phil Kidner to be succeeded by Tony Gray as CEO of the TCCA.

h i l K i d n e r , C EO o f t h e T E T R A a n d C r i t i c a l Communications Association (TCCA), has announced his retirement after 11 years at its helm. During his time as CEO, Kidner steered the association through a period of significant change. While the market for TETRA and other standardised, PMR, mission-critical, narrowband technologies continues to grow, critical broadband is now on the horizon. Under his leadership, the association has become fully engaged, on behalf of its members and all end users, in ensuring that broadband bearers deliver a fit-for-purpose service for business- and mission-critical communications. Under Kidner’s guidance, the TCCA has become a respected expert body on critical communications and has grown immensely in stature, supporting the ongoing development of the multivendor TETRA standard and helping to ensure the strength of the TETRA and critical communication market around the world. Kidner’s work included support for the 3GPP as market representation partner, and earlier this year worked with ETSI to deliver the first mission-critical Push to Talk Plugtests. He has also been an active speaker at many international conferences, and participated in a number of Australia’s Comms Connect events over the years in support of the Australasian TETRA and Critical Communications Forum (ATCCF). “The ATCCF thanks Phil for all the support he has provided to the ATCCF over the past 11 years, in growing the stature and ongoing success of the multivendor TETRA standard in Australasia and the support for critical broadband,” said Anton Abrahams, chairman of the ATCCF. Kidner will be succeeded as CEO by Tony Gray, founder and first chair of the TCCA’s Critical Communications Broadband Group (CCBG). Gray has worked in the mobile communications industry for more than 40 years and has been a TCCA board member for six years, sponsored by P3 Group, a highly regarded German communications engineering and consulting services provider. As

well as extensive knowledge of PMR technologies, Gray’s background brings significant commercial cellular expertise, as P3 has more than 15 years’ experience in the testing and optimisation of mobile networks worldwide. In other news from the TCCA, the association has formed an international broadband manufacturer co-operation group. Known as the Broadband Industry Group (BIG), its membership is aimed at category 1, 3GPP broadband technology manufacturers. BIG’s main objectives are to: • promote 3GPP standard technologies (LTE and 5G) in mature and emerging critical communication markets; • seek ways to advance market adoption of LTE and 5G technologies for the benefit critical-communication users and organisations; and • promote an evolutionary approach towards future critical communications solutions based on the achievements of TCCA — including, but not limited to, driving and supporting open standards and successful interoperability as well as a real understanding of professional users’ requirements — so that customers’ investments are protected over the long term. More information on BIG can be obtained by emailing ccbgsec@ tandcca.com or Tero Pesonen, chairman of BIG, at tero.pesonen@ tandcca.com.