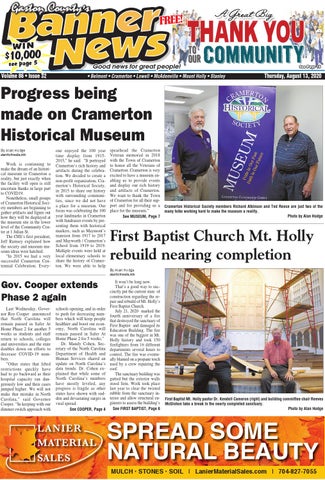 Progress being made on Cramerton Historical Museum By Alan Hodge alan@cfmedia.info

Work is continuing to make the dream of an historical museum in Cramerton a reality, but just exactly when the facility will open is still uncertain thanks in large part to COVID19. Nonetheless, small groups of Cramerton Historical Society members are beginning to gather artifacts and figure out how they will be displayed at the museum site in the lower level of the Community Center at 1 Julian St. The CHS’s first president, Jeff Ramsey explained how the society and museum museum ideas were hatched. “In 2015 we had a very successful Cramerton Centennial Celebration. Every-

one enjoyed the 100 year time display from 19152015,” he said. “It portrayed Cramerton’s rich history and artifacts during the celebration. We decided to create a non-profit organization, Cramerton’s Historical Society, in 2015 to share our history with surrounding communities, since we did not have a place for a museum. Our focus was celebrating the 100 year landmarks in Cramerton with fundraiser events by presenting them with historical markers, such as Maymont’s mansion from 1917 to 2017 and Mayworth / Cramerton’s School from 1919 to 2019. Multiple events were held at local elementary schools to share the history of Cramerton. We were able to help

Gov. Cooper extends Phase 2 again Last Wednesday, Governor Roy Cooper announced that North Carolina will remain paused in Safer At Home Phase 2 for another 5 weeks as students and staff return to schools, colleges and universities and the state doubles down on efforts to decrease COVID-19 numbers. “Other states that lifted restrictions quickly have had to go backward as their hospital capacity ran dangerously low and their cases jumped higher. We will not make that mistake in North Carolina,” said Governor Cooper. “In keeping with our dimmer switch approach with

schools opening, and in order to push for decreasing numbers which will keep people healthier and boost our economy, North Carolina will remain paused in Safer At Home Phase 2 for 5 weeks.” Dr. Mandy Cohen, Secretary of the North Carolina Department of Health and Human Services shared an update on North Carolina’s data trends. Dr. Cohen explained that while some of North Carolina’s numbers have mostly leveled, any progress is fragile as other states have shown with sudden and devastating surges in viral spread. See COOPER, Page 4

It won’t be long now. That’s a good way to succinctly put the current state of construction regarding the repair and rebuild of Mt. Holly’s First Baptist Church. July 21, 2020 marked the fourth anniversary of a fire that destroyed the sanctuary of First Baptist and damaged its Education Building. The fire was one of the biggest in Mt. Holly history and took 150 firefighters from 16 different departments several hours to control. The fire was eventually blamed on a propane torch used by a crew repairing the roof. The sanctuary building was gutted but the exterior walls stood firm. Work took place last year to clear the twisted rubble from the sanctuary interior and allow structural engineers to assess the building’s See FIRST BAPTIST, Page 6