Harold Town: the Wild One Exhibition (Part I: On-line release) 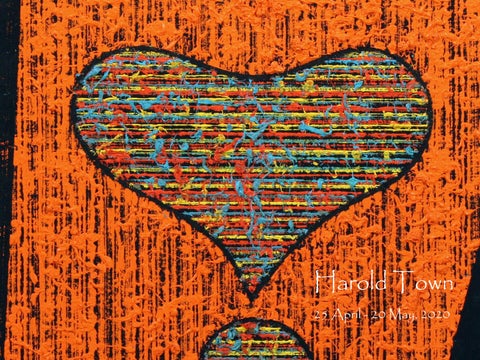 TOWN the wild one

about the exhibition &amp; Harold Town Some of the most important – and most wildly creative – examples of Canadian abstract art are the focus of HAROLD TOWN: THE WILD ONE at Calgary’s Wallace Galleries.

This new exhibition reflects the resurgence of interest in Harold Town. The controversial painter was a central figure in Painters Eleven, the Toronto collective that introduced abstract art to Canada in the 1950s. Town quickly became a celebrity in his own right, earning record prices for a living Canadian artist, and remaining in the public eye until his death in 1990. “Harold Town was the perhaps one of the most famous Canadian artist of his time,” says Colette Hubner, Director of Wallace Galleries. “More than an artist, he was a writer, raconteur and national media personality – stirring up controversy with his wicked sense of humour and his unconventional lifestyle.” There’s even a new website – haroldtown.com – describing him as “The Original Bad Boy of Canadian Art.” “Harold had the foresight to put aside some of the best pieces from each series he produced,” says Shelley Town. “Several pieces in the Wallace show come directly from the Estate and have rarely been seen publicly.”

“Harold was controversial because he regularly contradicted the views and opinions of others,” says art historian and past president of Sotheby’s Canada, David Silcox. A friend of Town’s for over 30 years, Silcox knew him well. “Harold was intensely curious about everything, and he was perpetually innovative. No wonder people thought he was provocative and occasionally disruptive.”

Over the years, Town represented Canada in exhibitions in Amsterdam, Brussels, Chicago, Dallas, Edinburgh, London, Madrid, Mexico City, Milan, Paris, Sao Paulo, Sydney, Tokyo, Venice, Vienna, Warsaw and Washington. He proved that Canada could produce innovative art that is relevant on the international stage, and he brought a new level of confidence and sophistication to the Canadian art scene. As for Town’s wild side, his daughter, Shelley Town, recalls him as an avid party-goer, a charmer and a flirt. “My father would often still be awake when we came down for breakfast. He’d be at the kitchen table, drinking Scotch and debating with his friends. He was a voracious reader and he could talk intelligently on any subject. He was a champion arguer. That’s where he often got into trouble, arguing with friends and critics at cocktail parties and in the press. But that never distracted him from his work, which remained the most important thing in his life.”

Exceptionally prolific, Town would often work on multiple series of paintings at the same time. He would focus on different projects at different times of day, sometimes in different locations – whether at his family home in Toronto’s Rosedale neighbourhood, at the legendary Studio Building (where several members of The Group of Seven had previously lived and worked), or at his farm in Peterborough, Ontario. “Harold had the foresight to put aside some of the best pieces from each series he produced,” says Shelley Town. “Several pieces in the Wallace show come directly from the Estate and have rarely been seen publicly.” 10

THE WILD ONE provides a fascinating overview of Town’s talents, showcasing some of his most well-known series, including prints, paintings and collages. The show gives a rare opportunity to view and purchase these truly significant works that Town considered some of his best. Among the highlights is a large selection of “Single Autographic Prints,” the pieces for which Harold first gained renown in the 1950s. Colourful, delicate and one-of-a-kind, these monographic prints were exhibited at the Venice Biennale in 1956 and 1964, and several were acquired by the Guggenheim Museum and the Museum of Modern Art in New York. They became the initial cornerstone of Town’s success at home and abroad.

In the late 1960s, Town explored abstract expressionism with large-format paintings, featuring dramatic compositions of space and colour. His work was an always-expanding exploration of the various facets of his artistic vision. 18

For the “Snaps” series in the early 1970s, Town developed a technique of snapping a paint-soaked string against the canvas – a time-consuming and physically strenuous process based on the snapping of a carpenter’s chalk line. These paintings are particularly captivating with their vivid texture, depth and colour.

Also in the 1970s, Town worked on the â&amp;#x20AC;&amp;#x153;Stretchâ&amp;#x20AC;? series of lithographs, featuring signature shapes that are stretched and elongated, creating dynamic colour relationships, often with a vibrating effect.

“People are surprised when they realize some these pieces are 50 - 60 years old,” says Colette Hubner. “They look so fresh and contemporary, they could have been painted today. But not many current painters have Town’s reputation.”

Recent gallery shows have been bringing to light old stories about Town’s days of decadence in the 1960s and 70s. More significantly, the work itself is attracting new buyers, ranging from old-school collectors to high-tech entrepreneurs. 28

As David Silcox points out, “Harold was a remarkably intelligent, original and imaginative. His energy was boundless. It is no surprise that people envied his productivity and his ability to work in several different media at the same time. It is now possible to see clearly how high the level of Town’s talent was, right from the time of his emergence. Today we have an exciting opportunity to introduce Harold Town’s genius to a new generation.”

Harold Town: the Wild One Exhibition (Part I: On-line release)

April 25 – May 20, 2020 Harold Town was renowned for his fiery personality and his insatiable need to paint and create art. Founder of the Painters Eleven, Town made a mark on Canadian history. This exhibition will reveal his abilities as a master draftsman with his meticulous abilities to draw and yet his ability to create ‘outside the box’ and unveil a new dimension to his art-making career and abilities; a true creator and artist through and through. Over the years, Town represented Canada in exhibitions in Amsterdam, Brussels, Chicago, Dallas, Edinburgh, London, Madrid, Mexico City, Milan, Paris, Sao Paulo, Sydney, Tokyo, Venice, Vienna, Warsaw and Washington. He proved that Canada could produce innovative art that is relevant on the international stage, and he brought a new level of confidence and sophistication to the Canadian art scene. – Warren Dunford