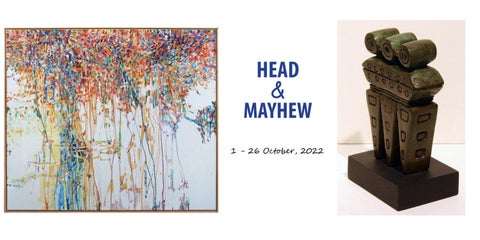 These two brilliant artists come together in a unique exhibition to celebrate their life work. Albeit from different provinces, they knew each other and followed each other’s work with interest, tied to a similar aspiration; to make art for art’s sake. Both Head and Mayhew create works that are about the visual language of art, not the verbal. Be it painting or sculpture, the idea was to appreciate the art outside of an artist statement or explanation; to appreciate the lines, colour, and form intuitively. To immerse yourself in these works of art is like exploring the unknown and to be lost (or found) in the visual world for which they each created. Their aspiration and energy are apparent. The organic forms that they each draw upon is a link to humanity and an exploration of the unknown.

a little about Bruce Head Bruce Head graduated from the University of Manitoba’s School of Art in 1953, one of a handful of young Manitoba artists whose work sparked a dramatic surge in interest in contemporary art in Western Canada, and who came to represent a unique, Prairie-based visual movement.

Head’s insistence on the integrity of the creative process permeated his professional life. As a graphic designer for the Canadian Broadcasting Corporation, he brought uniquely recognizable energy and bold strength to his work– energy that reflects consistently in his canvasses and sculptures. He exhibited in almost every province in Canada in both group and one-man shows, and his work is housed in corporate collections across the country. Elected to the Royal Canadian Academy in the early seventies (at the time the youngest Manitoban to be elected), he took early retirement from the CBC in the late eighties, building a large studio onto his home in south Winnipeg where he worked constantly, exhibiting frequently in galleries primarily in Western Canada, and accepting occasional commissions.

a little about Elza Mayhew Elza Mayhew graduated from the University of British Columbia with a Bachelor of Arts, double honours in French and Latin in 1936. Mayhew studied under renowned artist and teacher Jan Zach in Victoria from 1955-58. Zach was instrumental in opening the local Victoria community to contemporary art at the time. Later Mayhew finished her studies at the University of Oregon to receive her Masters in Fine Arts in 1963. In 1964, Mayhew, along with Harold Town, was invited to represent Canada at the Venice Biennale. Mayhew would go on to partake and be invited to innumerable exhibitions, such as; International Trade Fair in Tokyo in 1965, Expo ‘67, Spectrum Canada, RCA Exhibition for the Olympic Games in 1976, Sculpture Canada ‘78, Toronto, London, Brussels, Paris, and Expo ‘86 in Vancouver to name a few. Mayhew was elected into the Royal Canadian Academy in 1974. She received an honorary Doctorate from the University of Victoria in 1989. Mayhew’s works were very much inspired by her interest and passion for Latin history and her time spent in 1953-54 in Japan. The fascination with the past, present and future are predominant and reiterated in her works. Her preoccupation with human interaction with the environment resonates through her works.

“I always loved colour. We were away in the winter to Mexico and I loved it because the colour was different. I loved seeing what Molinarli did in putting colours together. My Colour is more intuitive than any theories. I love Blue and green.”- Bruce Head2

Work never ends up as it starts - it evolved; I have the right to change the work however I want. - Bruce Head2 Egad Egon sprang from a lengthy visit to Europe in the early 1990s, where we explored Vienna’s art museums and Bruce saw collections of both Gustav Klimt and Egon Schiele’s work. He found Schiele’s use of colour interesting in the relatively rare abstract landscapes he produced (Schiele is mostly known for his portrait work). Hence the title-- but I suspect the piece visually connects better to our yearly Mexico trips, which often coincided with the local versions of Mardi Gras in the streets, and were explosions of joyful colour in a country where colour is king. (curtesy of Judy Waytiuk) Bruce Head, Egad Egon, 2996, 42” x 48.5”, acrylic on canvas

Spanish Wells is the view from the sea-facing balcony of the small hotel where we stayed in the tiny Bahamian out-island of Spanish Wells. Ocean-going freighters often went by, far out in the deep passage between Spanish Wells and a few further out-islands-- the only moving objects in the space that seemed to stretch forever. (curtesy of Judy Waytiuk)

“The more sculpture I make, the more wordless I have become. You don’t think in verbal terms. I don’t even think about my work anymore, I just make it.” - Elza Mayhew1

The sculpture [Spirit ] is a labor of obsessive love. Modulation upon modulation are piled and organized into an imposing totem. That the work is vaguely figurative, with a commanding spirit, almost religious, is secondary to the unending complexity of surface modulation…. The end result is ritualistic. To run your eye up to this tower is a ceremony. For the artist the tight ritual comes from a formlessness left behind. Glenn Howarth, Victoria Daily Times, 1971.

Sculptures by Elza Mayhew at the Port Angeles Fine Art Centre…. There is a classical calm. Mayhew’s works are usually symmetrical, roughly geometric, at rest…. There’s a peacefulness which bespeaks ancient roots. In 1988 art is often cynical, fragmented, bound up in its own psychoses. Mayhew’s work stands above all that: patient, engaging, composed. Robert Amos, “Mayhew works displayed perfectly in idyllic setting”, Times-Colonist, 1988.

“My sculptures are very central. There are verticals and horizontals but few diagonals. They are highly structured and very architectural but they always relate to the human form. Many societies found security for themselves and their towns in columns or archways. Totems give a terrific feeling of security and they also mark time. They tie people to their past and future and I feel that my works are likewise - markers in time and of a place.” - Elza Mayhew 3

A Passion for Art; the Art and Dynamics of the Limners, Sono Nis Press, Victoria, BC. 1996. by Patricia Bovey.

Bruce Head & Elza Mayhew Exhibition 2022 October 1-26, 2022 Opening Reception: Saturday, October 1, 2-5pm These two brilliant artists come together in a unique exhibition to celebrate their life work. Albeit from different provinces and unknown to one another, they are tied with a similar aspiration; to make art for art’s sake. Both Head and Mayhew create works that are about the visual language of art, not the verbal. Be it painting or sculpture, the idea was to appreciate the art outside of an artist statement or explanation; to appreciate the lines, colour, and form intuitively. To immerse yourself in these works of art is like exploring the unknown and to be lost (or found) in the visual world for which they each created. Their aspiration and energy are apparent. The organic forms that they each draw upon is a link to humanity and an exploration of the unknown.