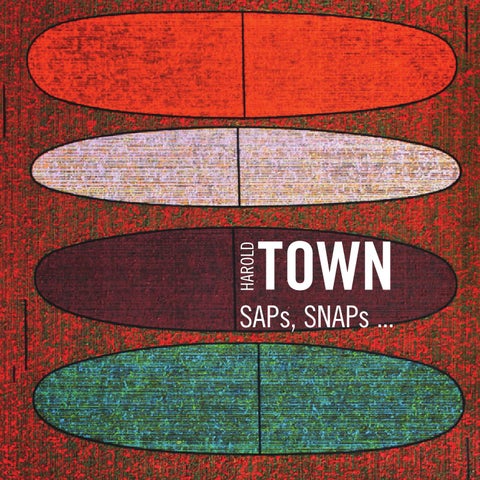 For Harold Town (1924-1990), art was power. Just as he drew from revered masters–Hokusai, Mondrian, Picasso, Rembrandt, Turner, Utamaro, Whistler, among others–and global art traditions, so his attitudes to art were founded on his belief in the virility and strength of the gods, the epic dramas of mankind, and his ambition to push relentlessly toward an heroic scale. The energy that flowed into and through his art, as is manifest in the paintings, drawings, and prints in this exhibition, and that set the goals and directions of his career, was both electric and sustaining. The works in this exhibition show the broad and varied range of Town’s talent, interests, and achievements. Although he died at the age of sixty-six, he was still one of the most prolific artists in Canadian history. He was a brilliant draughtsman with an outstanding natural talent for drawing. His curiosity ranged across broad and multi-faceted sub-divisions of the visual arts: he made drawings, prints (silkscreens, etchings, aquatints, lithographs), paintings, sculpture, collages, portraits, and was a brilliant illustrator (Leonard Cohen’s Beautiful Losers, and Irving Layton’s Love Where the Nights Are Long). Some of the art in this exhibition was created during the brief, intense life of Painters Eleven (1953-1960), of which Harold Town was the most charismatic and exuberant member. In particular are two superb paintings (each 48 × 96 inches) that were kept by the artist and in his Estate until now. Town was also a provocative and prolific writer, a brilliant wit, who was frequently interviewed and quoted, and ready to offer his opinion on any subject–from art to other artists to parsnips to zeppelins–with originality, humour, and insight. Town was a compulsive and energetic workaholic. He dove into his work without hesitation. He had a large capacity of mind, a photographic memory, and a speed of invention and decision that was exceptional. His vivid imagination

perfectly matched his coordination of eye, hand, and intellect. To accommodate his impressive rate of creation, Town had two painting studios, a drawing studio, a collage studio, a sculpture studio, and an etching studio. His idea of relaxation was to move from one to the other. And as if this range of invention wasn’t enough, he busied himself with stage designs for theatre and ballet productions, costume designs, and by making arresting posters for various charities.

Alfred Barr, founding director of the Museum of Modern Art, called Town ‘the greatest living printmaker in the world.’ Barr was referring to Town’s Single Autographic Prints (‘SAPs’ as Town called them), which are multi-layered monoprints made on a lithographic stone. These came from the fertile 1950s, and were created during the intense life of Painters Eleven. This large body of prints, has no parallel or equal in Canadian art. And Town’s poetic and often whimsical titles for many of these enchanting prints, as for his paintings, credited his debt to classic art–and not just European, Greek, and Roman sources, but Japanese and Chinese traditions too. He had studied the masters at the Royal Ontario Museum and the Art Gallery of Ontario, as well as the major museums in New York, Chicago, Detroit, and Washington, D.C. Little wonder, then, that Town went on to become one of the most prominent and most honoured artist of his time. He represented Canada in exhibitions in Amsterdam, Belgrade, Brussels, Chicago, Cleveland, Cracow, Dallas, Edinburgh, Kassel, Ljubljana, London, Lugano, Madrid, Mexico City, Milan, Osaka, Paris, Manila, Pittsburgh, Santiago, Sao Paulo, Seattle, Sydney, Tokyo, Tunis, Utrecht, Venice, Vienna, Warsaw, and Washington. His work garnered many prizes, and was purchased by the Tate Gallery in London, the Museum of Modern Art, the Metropolitan Museum of Art, and the Guggenheim Museum in New York, the Hirshhorn Museum and Sculpture Garden in Washington, D.C., and numerous

other such institutions around the globe and across Canada. He received several honorary degrees and was made an Officer of the Order of Canada. The Art Institute of Canadaâ&amp;#x20AC;&amp;#x2122;s free monographs on Canadian artists includes an excellent one on Town by Professor Emeritus Gerta Moray, a distinguished author of major works on other Canadian artists. Her Town monograph can be downloaded at http://www.aci-iac.ca

“[Town’s] single autographic prints ... were surely among the most beautiful art objects ever made by a Canadian artist.” 1 ~ William Withrow (director of the Art Gallery of Ontario 1961 - 1990) 14

“He is unique to Canada in being a printmaker of distinction… His prints, extraordinarily joyous in colour and imagination in their forms, are almost magical in their effect.” 2 ~ Alan Jarvis (Director of the National Gallery of Canada 1955 - 1960)

“[his prints] are delicate, wonderfully carried, and endlessly mysterious. One can look at them longer, and with more profit, than at any other art objects produced in Canada at that time: so much is happening in them, so many abstract ‘events’ are crowded into a relatively small space.” 3 ~ Robert Fulford O.C. (Canadian editor, essayist and critic)

“the Snap paintings function as both commodities (paintings for sale on a wall) and as documents of a performance, that they are inherently performative (violently so) and are thus possible to read as activities taking place in a specific time.” 4 ~ R.M. Vaughan (Canadian writer and video artist)

“Harold Town had been a huge star in Toronto in the late 1950s and early 1960s. Then he wasn’t. By the time he came to the Snaps, he didn’t have much to lose. And so he set about painting what are perhaps the greatest paintings of his entire career. And yes, I really do think that (to drag up that weary starchy statement from 1985, for what I hope will be the last time) the Snaps are ‘among the most original, non-representational paintings ever made’” 5 ~ Gary Michael Dault (Canadian writer, artist, and art critic)

“one of the most widely diversified artists in Canadian history [who] gave the grey Canadian personality a desperately needed flash of neon...he was, in the words of Robert Fulford, part of art’s heroic effort to save us all from boring ourselves to death.” 6 ~ Donn Downey (the Globe and Mail, December 28, 1990)

© 2016 the contributors and Wallace Galleries ltd. All rights reserved. No portion of this publication may be reproduced without the written permission of the gallery. Director: Heidi Hubner 52

Single Autographic Prints, SNAPs and other works in the exhibition // March 5-16, 2016