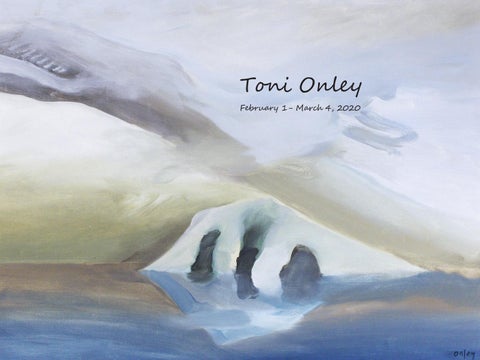 a little about Toni Onley

After moving to British Columbia in 1955, Onley was awarded a scholarship to the Institute Allende in San Miguel de Allende, Mexico. There he studied under James Pinto (19071987) whose abstract impressionistic paintings inspired him to experiment with non-objective painting and collage, and later to produce his major period of abstract painting during 1961-1965. A multi-awarded Canadian art legend and recipient of the Order of Canada, Onley is best known for his watercolour landscapes of Canadaâ&amp;#x20AC;&amp;#x2122;s West Coast. He was influenced by traditional English landscape painters, particularly J.M.W. Turner (1775-1851) and Archibald Knox (1864-1933).

So often we see in history that artists’ work comes full circle from where they started. Their inspirations change and influences change and thus their works are more sophisticated but the draw back to one’s roots seems to be always apparent. There is an innate desire to search and explore different avenues in creativity and meaning to come back to their first love. When looking back at the growth of Onley through the years it is fascinating to see this pattern evolve.

“Alongside of my abstract work in collage, I continue to paint watercolors out of doors and oil landscapes in my studio. I have painted landscape since I was a teenager on the Isle of Man, and always will. All my ideas come from landscape.” - Toni Onley

Onley, best known for his landscape paintings, is also known as an important abstract artist. In the early 1960s, he created purely abstract works, most notably the vortex images of the Polar series, of which No. 1 is in the Tate Gallery in London. We have Polar No. 27 of this series, a dark swirl of forms, no so much a vortex of colour and light, like No. 1, as a mysterious force emerging from an all-enveloping haze. 7

In the late 1960s, Onley gradually returned to landscape with abstract landscapes such as Dry Land (1968) and Morning Landscape (1969). Since then, he always painted landscape. The abstract element remains in his concentration on the most prominent physical features of the particular view he was painting. This is quite obvious in some of his landscapes, such as McRae Island, Malaspina Strait, BC (1988), in others, it is more subtle.

By the late 1990s, Onley was inspired to produce, along with his landscape watercolours, a complete return to abstraction, first seen in the small collages exhibited here. This effort eventually resulted in the vibrant, intriguing, large magazine collages of 2001-2003, of which the Wallace Gallery now has ten — eight of which are new to the gallery and five of which are part of the exhibition.

Interestingly, the collage works by Onley first came about by accident while he was living and painting in San Miguel de Allende, Mexico in the 1950s. At the time, he was unhappy with the landscapes he was making and had decided to tear them all up. As they fell to the ground, he had discovered a certain synergy between shapes and forms of the torn pieces that strongly resonated with him. He collected these pieces and began to collage them together in new and exciting forms. There was a certain “dynamic tension” (as described by Ian Thom, curator of the Vancouver Art Gallery at that time)* that came forward in these stunning works. He continued to create these works when he later returned to Canada.

This was a time of abstract expressionism in Canada (and the USA), so when Onley returned to Vancouver, the works were an instant hit, and catapulted him forward in the arts scene. This was his first notable period of work, the most significant pieces being collected by the Tate, the National Gallery of Canada and others. Landscape still fascinated Onley; he never abandoned his love of the land and would continue exploring both landscape and abstraction throughout his career. Indeed he viewed landscape the two as connected; “The attitude that goes in my collages goes into my watercolours. It’s the same, I don’t see any big difference expect that, with one, I am dealing with a subject matter, with the other I am dealing with pure Abstract form.”* His inspiration was light and how elements are interrelated to one another. He was always interested in the relationship between his subject matter and the edges of the painting, whether abstract or landscape. His passion was to find and capture “the timeless things...the things that don’t date. The things that are there now and have always been there, and this is what feeds my art.”* *Landscape Revealed: The Art of Toni Onley (2004), doncuentary, available on Youtube

“I was told by a visiting artist that Onley’s studio would be strewn with collage works from a clothing line...hanging to dry. Constantly creating, as many artists do, Onley would be enveloped by his art and practive. I would suspect that this somewhat chaotic environment led to excitment and further creation.” - curator at Wallace Galleries

When queried about his different styles in 2003, Onley replied, “If I was a musician, why shouldn’t I play more than one instrument?” Indeed, Onley was a multi-instrumentalist, mastering at least eight media: watercolour, oil, collage, drawing, etching, aquatint, and even sculpture. His etchings are perhaps his least known medium –– several fascinating examples of which can be seen below.

1964: Elected a Fellow of the Royal Canadian Academy of the Arts 1977: Awarded the Queen’s Silver Jubilee Medal 1999: Appointed an Officer of the Order of Canada 2000: Awarded a D.Litt. by Okanagan University College, Kelowna, BC (now University of British Columbia, Okanagan campus) 2002: Awarded the Queen’s Golden Jubilee Medal 2002: The Isle of Man Post Office issued a set of stamps of Onley’s Manx watercolours 2007: Island Mountain Arts in Wells, BC, renames its summer art school (the Wells Artists’ Project) the Toni Onley Artists’ Project in memory of him

This exhibition highlights some of Onley's great works; celebrating the diversity of his career with pieces from 1962 -2003. A fantastic artist, who captured light and the timelessness within each piece of artwork. Come and be swept into a world where time stands still and evokes a sense of tranquility and contemplation.