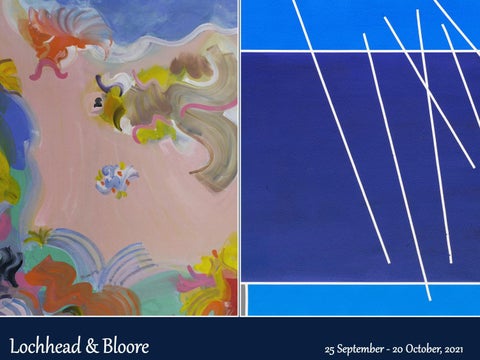 about Lochhead An early arts leader, Lochhead was invited to become director of the University of Saskatchewan School of Art at Regina College in 1950, when he was just 24 years old. At the same time, he was asked to spearhead the creation of the Norman MacKenzie Art Gallery and, in 1955, Lochhead , and fellow professor Arthur McKay, created the Emma Lake Professional Artists’ Workshop. The acclaimed sessions drew both artists and influential art critics to Saskatchewan and helped propel local artists onto the national and international scene.

In 1961, the National Gallery of Canada in Ottawa featured Lochhead and contemporaries Doug Morton, Art McKay, Ron Bloore and Ted Godwin in a show entitled Five Painters from Regina. The modern art exhibition put Regina on the map artistically and launched the artists, dubbed the Regina Five, into the visual arts spotlight. Ken’s contributions to the Canadian art world resulted in various honours, including the Order of Canada in 1971, an Honorary Doctor of Laws from the University of Regina in 2001, and the Governor General’s Award in Visual and Media Arts in 2006. Between 1953 and 2006 Ken exhibited in over three hundred national and international exhibitions and received over 18 major Canadian and international art commissions, in addition to serving on many national and provincial public boards, committees and organizations. His work is in public and private collections around the world. 1

An important theme in Ken’s work was the element of play. Ken had a wonderful sense of humour, and played in the imaginary world he created. There is a lightness to his touch, a warmth and smile behind the image, from prairie people curling to the human-like birds which lived in enchanted gardens, and the “Animal Crackers” creatures named after children’s cookies. He never ceased to enjoy the world he lived in. - Joanne Lochhead

In the mid to late 70s and onwards

Their daughters, Jenny, Tessa, and Polly, world became his world, of imaginary and fanciful creatures. Birds had always been a subject of personal interest, as seen in the Gander mural. Now he was inspired to create a universe of birds and fabulous beasts, all with individual personalities and peculiarities. They were playful, quirky, and fun! 10

No matter what Ken was working on, he never ceased to draw and paint landscapes. Family holidays led to paintings of the Canadian Rockies and maritime harbours. Cottage summers meant time on the Gatineau River and paintings of log booms, water, wind and sail. And always, the forest surrounding his studio was a source of inspiration – a place of enchantment, a place of comfort, and a place of peace.1

“Lochhead’s latest paintings have integrated his long-held interests in colour and figure, in

a new and startling way. They confirm, if this were still needed, his conviction in the importance of communication and in the subjectivity, the intimacy, and above all, the joy of painting.”2 2 Babinska, Anna. Kenneth Lochhead : A Garden of Delights = Un jardin de délices. Ottawa, Ont.: Arts Court/La Cour des Arts, 1988.

One of the underlying themes of Ken’s work was his interest in the immediate world around him. As soon as he arrived in Regina he began to explore this new space, sketching and painting people and their activities, rural towns, prairie fields, and the forests of Emma Lake. Even the abstract works from this period, which grew from the Emma Lake workshops, reflected this world. His flat, colour field stem paintings of the 1960s were inspired by images of flowers.1

When asked about the broad range of his work Ken responded by saying:

“One doesn’t expect a musician to only play pieces by a single composer, so why should I limit myself to only painting one subject in one way?” His art practice was diverse but his remarkable sense of colour, light, line and space was consistent in every piece.1

about Bloore Director of the Norman Mackenzie Art Gallery in 1958, Bloore created many exhibitions with a focus on contemporary Canadian painters.

In 1962, Bloore received a Canada Council Senior Arts Fellowship Grant, allowing him to live and work abroad for a year. During his travels to Greece, Turkey, and Egypt, Bloore became inspired by the symbolism and archaeological quality of the remaining architecture of these early civilizations. Upon his return to Canada the following year, Bloore destroyed all his previous work and renounced the use of colour, hoping to achieve the same transcendental quality he felt while looking at ancient architecture. He painted low-relief works in variations of white or black, often using a strong, graphic shape for his canvas (Painting, 1959). Eventually, he would make 3-dimensional maquettes of his pieces before constructing the full-sized versions, directly relating his work to monumental architecture. As the years progressed, Bloore reached even further back into history, including hieroglyphic, pictographic forms within his paintings, searching to communicate essential truths of the human condition. Ronald Bloore studied Art and Archaeology from the University of Toronto (1949), and at the Institute of Fine Arts, New York University (1949-1951); at Washington University, St. Louis, Missouri (1953); at the Courtauld Institute of Art in London (1955-1957) and received honorary doctorates from York University and the University of Regina. Bloore taught art at many Canadian universities, and had many public commissions including a mural for Dorval International Airport (1968). He is a member of the Order of Canada (1993). 2

Despite the austere geometric appearance of these works, the artist is a highly visual and lyrical painter. The elementary marks of the geometry retain an immediate expressiveness; the relaxed asymmetry and optimistic acceptance of accidental gestures reflect the artist’s subjective presence. We also witness a calm humour in these pictures as stable patterns are fractured to create illogical and dynamic designs... 28

The works construct altar-like bas-reliefs in paint... The open-ended geometry of the paintings is a web to ensnare our thoughts. In the autonomy of the works, Bloore exiles connoisseurship; he stresses literal painting, and quells false literary, psychic interpretations. He prompts us to relax speculation about the meaning... to admit response from the distant reaches of the psyche.3

3 Ted Fraser in his catalogue for Bloore: Sixteen Years, 1975. cf:Heath on Fraser

“It seems to me that as eyes search too much for the eternal ‘new’, they wish to escape from reflection or, better, meditation. The white line series is a series begun and finished (presumably finished); there are infinite variations which could have been explored but I prefer to avoid exploitation. Forms were quite consciously limited to cruciform design. It has kept them Spartan and has permitted no extraneous seduction. You might even call it: art without frills.”4 - original publication unknown.

“Ron Bloore in his very austere way, using only white, is equally adventuresome and fearless. He’ll push anything to the edge and that’s where real brilliance comes in.” 36

“There are preparatory drawings and sometimes the drawings can take longer to make. The drawing is about figuring out the kind of image that I respond to. I sometimes start all over again, wiping the whole thing out with a cordless electric eraser, until I finally get it. Then I can grid it up and transfer it: so the painting is totally preconceived and it’s really a technical problem to finish it.”6

“They’re all untitled . Why restrict your imagination?”5

Exhibition: September 25- October 20, 2021 Opening Reception: Saturday, September, 25, 2021: 2-5pm Lochhead and Bloore were both professors at the University of Regina in the 1950s-60s. Lochhead was head of the art department and Bloore was curator at the Mackenzie Art Gallery. Both were instrumental in the action expression art movement in the 60s. Both with very different approaches to art but with a shared passion for creating and making art that brought them together. With McKay, Morton and Godwin, they became known as the Regina Five. Their work more diverse and expansive throughout their careers then perhaps commonly known, this exhibition high lights the diversity, intellect, and devotion both Lochhead and Bloore shared.