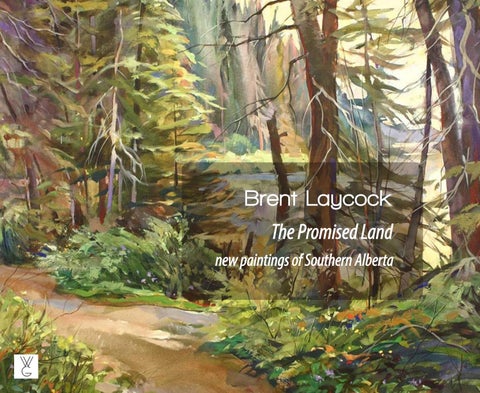 about Brent Laycock Born June 2, 1947 at Lethbridge, Alberta Laycockâ&amp;#x20AC;&amp;#x2122;s interest in art, landscape, flowers, and music all stem from his childhood on the family farm in southern Alberta where the expansive prairie, sky, and distant Rockies captivated his imagination. In almost all of his landscape work, he is intrigued with the interplay of the dramatic natural forces that act upon the landscape. These forces translate into the push and pull of the visual elements in the composition. The expression of feeling becomes a balancing act in which Laycock attempts to give the work a sense of spirit and life though a fluid gestural painting style. However, he still exerts enough discipline over the colour and composition to give the piece unity. He allows accidental things to happen with the movement of the paint and brush so that the piece begins to take on a life of its own. After the initial rather loose stage of carefree direct painting, he then face the task of bringing order and enough clarity to the composition to allow the viewer both an emotional feeling and some understanding of the subject. Even though the representation of reality is present, the solution of abstract design problems is his main concern. It is in hopes that each painting will say something about the original subject matter but will also communicate on an abstract level, which contributes to the communication of feelings.

The Promised Land: new paintings of Southern Alberta - Artist Statement “This really is the land of promise. I have lived in southern Alberta my whole life and have been captivated by this incredible landscape of prairie, hills, mountains and endless sky. Everyone living here can find some form of hope connected to this land. The indigenous citizens hope for renewed respect, appreciation and honour here. Decendants of immigrants (like me) hope that the peace and prosperity they have always enjoyed will endure. New immigrants hope for an increased measure of peace and prosperity. This is a land of with a promise of fulfilment. If we care for this land, it will care for us. In my opinion, a good place to start is to simply look 6

at the landscape that surrounds us and appreciate its profound beauty. My goal as an artist is to respond to this beauty and to communicate my feelings about it through painting. If a viewer can catch even a glimmer of the thrill that I feel when interpreting our landscape, I’m happy with that result. I also believe that the visual enjoyment of our environment can generate a more profound respect for it. We will be proud of our land, happy to be connected to it and will commit to taking good care of it and care for all our neighbours who occupy it.”

Where I have been roaming:

Every summer, we enjoy visiting our cabin in Waterton Lakes National Park where I never get tired of seeing and painting the spectacular scenery. The fortunate placement of the city of Calgary near the prairie to the east and south, the parkland to the north and to the foothills and mountains to the west provides a variety of landscape material close to home. I also appreciate the changes that come with the hours of the day and the seasons of the year. Variation of vision can also be achieved by taking a close-up view, a panoramic view and everything in between.

“The biggest challenge is to express one’s vision and feelings with deft gestures, invigorating colour and cohesive design in a way that makes the hard work invisible.” - Brent Laycock

NOVEMBER 12 - December 2, 2020 Brent Laycock - The Promised Land: New Paintings of Southern Alberta Opening Reception: Saturday, November 14 from 2-5pm This homeland of southern Alberta is where Laycock was born, raised and spent most of his life. There are always new places to discover and familiar places that need to be examined with a fresh outlook & rediscovered. The confinement of the pandemic has given us an opportunity to appreciate the rich beauties of this area. This is really the land of promise. The purpose in sharing these paintings is to communicate some of the joy that Laycock experience as he explores the landscape of southern Alberta. With a keen appreciate to the changes of light throughout the day and the changes in the seasons lends to an ever evolving and challenging subject that Laycock looks to capture on his canvas…an ever changing opportunity for growth, exploration and discovery to share.