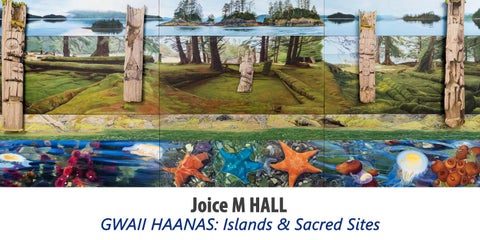 Artists in Gwaii Haanas is an annual residency program, presented by the Haida Gwaii Museum and Parks Canada, with the goal of connecting artists to Gwaii Haanasâ&amp;#x20AC;&amp;#x201D;and through these artists, connect Gwaii Haanas to Canada and the greater world. Three artists will spend 5-10 days immersed in travel throughout the Gwaii Haanas National Park Reserve, National Marine Conservation Area Reserve and Haida Heritage Site. Based at a remote field-camp, artists will be guided by Gwaii Haanas staff as they embark on day-trips throughout the region to conduct artistic research through exploration, photography, sketching, writing and contemplation. Breathtaking vistas, unique interactions with culture and nature, and inspirational conversation with Gwaii Haanas staff, the Haida Gwaii Watchmen and others in the area are sure to inspire and inform their artistic practice.

In creating art inspired by Gwaii Haanas, artists can reveal meanings and relationships that complement scientific, cultural and educational perspectives. Participating artists are expected to share their residency experiences through their diverse networks and in creative ways to heighten the profile and exposure of the Artist in Gwaii Haanas residency program, and, to form connect ions that extend across Haida Gwaii and beyond.

The Totem Pole in brief

Most totem poles display beings, or crest animals, marking a familyâ&amp;#x20AC;&amp;#x2122;s lineage and validating the powerful rights and privileges that the family held. Totem poles would not necessarily tell a story so much as it would serve to document stories and histories familiar to community members or particular family or clan members. A totem pole typically features symbolic and stylized human, animal, and supernatural forms. Totem poles are primarily visual representations of kinship, depicting family crests and clan membership. For example, some Kwakwakaâ&amp;#x20AC;&amp;#x2122;wakw families of northern Vancouver Island belonging to the Thunderbird Clan will feature a Thunderbird crest and familial legends on their poles. Other common crests among coastal First Nations include the wolf, eagle, grizzly bear, thunderbird, killer whale, frog, raven, and salmon. Wealthy and influential families may have more than one crest. Totem poles can also be created to honour a particular event or important person.

When a chief or person of high standing died, his body lay in state in his home and was stored inside a bentwood mortuary box. The box rested on a manda, a large carved figure believed to carry the deceased to the afterworld. The body was eventually transferred to a mortuary house where it rested until the mortuary pole was complete. This tradition allowed the eldest son of the deceased personâ&amp;#x20AC;&amp;#x2122;s eldest sister preparation time to assume the role left by his uncle. During this two year period, the nephew was tasked with carving a mortuary pole, hosting a potlatch to celebrate the life of his uncle, and amassing the wealth required to pay the witnesses at the potlatch. If the nephew did not complete these tasks within a two-year limit, a relative who was able to fulfill the requirements could challenge the role. A mortuary pole was the grave of a high status person. The pole, carved with the crests of the deceased person, had a cavity at the top where the remains were placed inside a bentwood box. A plaque, usually with a painted or carved design on it, was placed in front of this cavity to cover the box from view. A board placed on top kept the rain out, and rocks placed on the board stopped the winds from blowing it away. Mortuary poles were considerably shorter than house frontal poles or memorial poles. They were carved with the base of the tree as the top of the pole.

The essence of the past is notably present in the spiritual land of Haida Gwaii, Gwaii Haanas National Park, the National Marine Conservation Area Reserve, and Haida Heritage site. The fragility &amp; strength of this area and its people are prevalent and preserved. Its story not to be forgotten. Hall captures its story in these dramatic works in attempt to recreate the drama and beauty she experienced on her visit and residency.

2018 the contributors and Wallace Galleries ltd. All rights reserved. No portion of this publication may be reproduced without permission of the gallery.

Gwaii Haanas: Islands & Sacred Sights Exhibition is a series of work by Joice M. Hall while she was on residency in Haida Gwaii in 2016. This exhibition is her attempt to recreate the drama and Beauty of this captivating area. Exhibition opening on Saturday, October 13, 2018; artist in attendance from 1-5 PM and talk at 3 PM Continues through to October 31, 2018