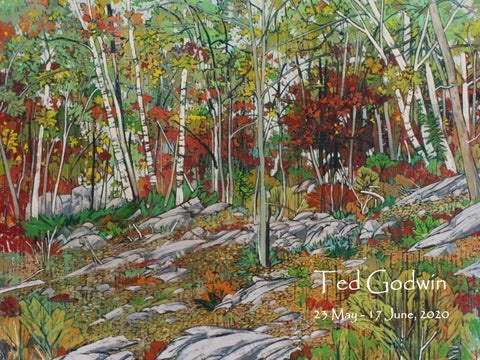 about Ted Godwin Ted Godwin was born in Calgary in 1933. He studied at the Southern Alberta Institute of Technology (and Art) in 1955. Godwin, “The Kid”, was the youngest member of the group known as the Regina Five.

In 1964, Ronald Bloore, the curator of the Mackenzie Art Gallery, together with four of his professor friends staged an exhibition that would change the course of each of these artist’s lives. Ronald Bloore, Kenneth Lochhead, the head of the art school at the University of Regina, Arthur McKay, Douglas Morton, and Ted Godwin collectively came together for this exhibition. The director of the National Gallery of Canada at the time, Richard Simmins, was so taken by the exhibition that he asked to have the show exhibit at the National Gallery of Canada and the “Regina Five” was born. Godwin was 28 years old at the time. It was an innovative time and the abstract expression movement was going strong in the 60s. Bloore and Lochhead started the Emma Lake workshops in northern Saskatchewan in which New York art critic, Clement Greenberg, Barnett Newman (1959), Jules Olitski (1964), and so many other significant art figures attended and taught. It changed the course of Godwin’s painting career. He taught and influenced many young impressionable artists at the University of Regina until 1985 (a heart condition forced his retirement).

“A painter must be involved as deeply and completely in life as possible for it is only through living that ‘life’ can be assessed, re-arranged, or mirrored. My painting is a process of discovery and evaluation of the internal and external forces I apprehend. These stimuli are re-arranged to become part of my personal vocabulary of abstraction. The success of a work is dependent upon how well the stimulus has been absorbed and the degree of command I have established over the image and the artifices used to create it with.” - Ted Godwin (Stratford Exhibition 1962)

Over the years, Godwin exhibited extensively across Canada and in the UK. Ted Godwin was elected to the Royal Canadian Academy (RCA) in 1974, and was awarded the Queens Silver Jubilee Medal 1978. He was awarded by the Alberta College of Art and Design Board of Governors, the Award of Excellence, and was also awarded an Honorary Doctorate from the University of Regina in 2001 (along with all the Regina Five). He received the Lieutenant Governor’s Award in 2010. He published, in 1999, “A Handbook for the Emerging Artist”, and won the Saskatchewan Book Award for best new publication (Educational). In 2004, for his excellence in the field of visual arts, Godwin was made an Officer of the Order of Canada and in 2010, and he was chosen Artist of the Year by Trout Unlimited that same year. Ted Godwin had been exhibiting his work since 1955 and had more than 60 solo exhibitions trhoughout his career. He was a devote writer, painter, fly-fisherman, practiced Tai Chi, and was a significant figure, and mentor in Alcoholics Anonymous.

“At Times Godwin was known to be brash and boisterous but once you got past the harsh exterior, he was actually quite kind.” - says director, Colette Hubner Godwin was an educator and influenced a number of artists during their careers. Perhaps it was important for him to help and encourage others because of his problems as a child with dyslexia. A misunderstood condition during his time. He struggled during school. He immersed himself into art and music. As early of an age that Godwin could remember he wanted to be in the arts. 10

He was always playing jazz music in his studio while he painted. He loved music and was a huge supporter of the jazz community. He played the piano but never in public, maintaining he was not good enough to play live. However, his art seems to have a lyrical and playful, perhaps musical quality. Many people comment on the diversity of Godwin’s work. There are seemingly three distinctive periods of his oeuvre, as Anne Davis points out in her essay in “Ted Godwin - The Regina Five Years: 1957-1967”. The first being; known as his Regina Years, the second; the Tartan Series, and the third; his landscapes.

“As artist, my mission is to effect, reflect and chronicle my understanding and comprehension of the human journey using a variety of iconic symbols that others can relate to. I believe that over the past three decades there has arisen a tragic misunderstanding of the purpose of art and its ultimate mission. The (Cult of New) has become confused with the Avante Garde. In the ensuing chaos, many have lost their way and forgotten that sometimes the Emperor really is naked; what was taken for magic and import, is only smoke and mirrors after all. 20

While the current state and the future of art may be a trifle murky, its history sure as hell isn’t. ...” “These works [the Tartan’s] are from a time when I had the vigor, strength, commitment, and intellectual curiosity of youth - marking them as being from a time when I was at the height of my creative potential.” - Ted Godwin, 1999 from Ted Godwin: The Tartan Years, 1967-1976

Godwin was an avid fly-fisherman. Thus, the attraction to painting landscape came natural to him. His landscapes, or perhaps more accurately described as waterscape paintings, are but snippets in time. For Godwin they are compilations on memories and experiences and thus each work is more about what exists in the mind than that of reality. The environment always changing &amp; the draw to a new watering hole always and forever present for him, his subject matter endless. Godwin’s waterscapes were not only a reflection of his passion but also spiritual and with times a historical or environmental ideology attached. 26

As Geoffrey Simmins writes in “Lower Bow - A Celebration of Wilderness, Art and Fishing”; he eloquently points out, “The river itself changes. Eddies and backwaters become rapids during high water. To know a river, is paradoxically, to realize that one cannot know it - except to recognize its ever changing aspects”. Water by its nature is abstract. It holds a whole new world; an unknown and it is mesmerizing. To capture the essence of water is unto a challenge in itself for the artist. After all Godwin always said to me, “my landscapes are abstract cunningly disguised as landscapes” (art director, Colette Hubner). There is always something deeper to these works than at the surface with Godwin and his work. As Godwin always said, “you have to give a painting time to talk to you...” The challenge to captivate water through the eyes of a fisherman was too luring...

Known as “the Kid”, Godwin was a professor at the University of Regina in the 50s and 60s, and one of five artists to be exhibited at the National Gallery of Canada in the 60s; where the group was called “The Regina Five” and the name stuck. An innovative and inspiration group of artists and professors that put western Canada on the map of action expressionism at the time. Godwin embraced his creativity and experimented and grew from his time in Regina and continued to create throughout his career until his passing in 2013. This exhibition will celebrate a man that embodied his art and continually was creating. The exhibition will span works from his early years in Regina until his later landscape works in the 2000s.