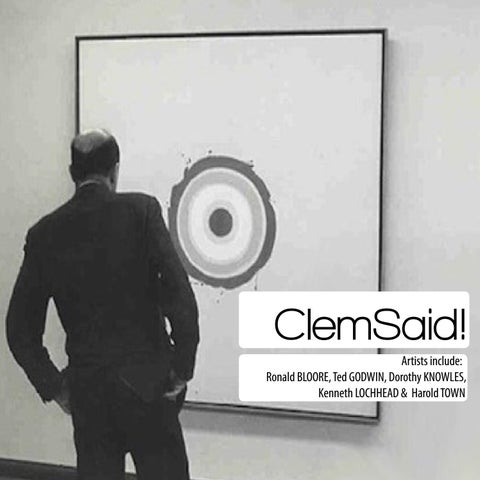 Clement Greenberg (1909-1994) graduated from Syracruse Univserity in 1930. He was perhaps the most influential, and New York’s most well-known, art critic of the twentieth century.

In 1962, Clement Greenberg became the first art critic to lead the Emma Lake Artists’ Workshop. Greenberg’s visit proved to be a watershed in the history of Canadian art and art criticism, helping to forge a unique connection between a generation of Western Canadian artists and the New York art scene. It also helped to establish Greenberg’s views as a dominant paradigm in Canadian art criticism in the 1960s and 70s.

about the exhibition ClemSaid explores the relationships -from positive to negativethat this renowned critic had on 5 artists currently represented by Wallace Galleries. The five artists; Ronald Bloore, Ted Godwin, Dorothy Knowles, Kenneth Lochhead, and Harold Town each had their own experiences and opinions on Greenberg and his views on [Modern] art. As an influential art mind, Greenberg impacted the Canadian art scene with his visits, and his brief or lifelong connection with each artist exhibited had an impact on their art career in one way or another. We invite you to enjoy the works and walk through a bit of history with each of these great artists... let your mind go &amp; explore another world. â&amp;#x20AC;&amp;#x153;Love him or hate him, admire him or revile him, there is no doubt that Clement Greenberg was the most influential critic of modern art in the second half of the twentieth century. His championing of abstract expressionist painters such as Jackson Pollock, Barnett Newman, Helen Frankenthaler, and David Smith put the United States on the international art map, and the intellectual power of his polemical essays helped bring about the midcentury shift in which New York replaced Paris as the art capital of the Western world.â&amp;#x20AC;?* *Clement Greenberg: a Life by Florence Rubenfeld. 2004. University of Minnisota Press

Ronald BLOORE Missing the year that Clement Greenberg was in Regina for the the Emma Lake Workshops because he was in Greece, Bloore returned to find the critics name everywhere, and his ideas of modernism heavily influencing the art scene. Strongly disagreeing with Greenberg about art, Bloore was extremely outspoken in his rejection towards Greenbergs ideas. The two had a famously contentious relationship, but only when it came to their views on art. While Greenberg did not like the work that Bloore produced, he once stated, “The vitality of art in Regina does constitute an unusual phenomenon…five such fired up artists would amount to a lot in New York, let alone in a city of 125,000…I think it can be said without offending anyone that Bloore is the ‘leader’ of the Regina Five; certainly he was the most formed and distinctive artist of the group….this does not mean that I like what he does. It’s a little sour and at the same time too elegant in its whites….. All the same, Bloore remains very much an individual and remaining that, he may yet force me to eat my words. And even if that does not happen, the School of Regina will remain in debt to him for his leadership, which brought in a certain influence that kept certain other, more noxious, influences out.”*

Ronald Bloore on art: “Art is a serious, not a casual activity. It cannot be approached simply by the recognition only of the spectator’s past experience. Any truly creative work should be a revelation to the beholder, an extension of his experience in life, not a confirmation of that which he already knows.” - Speaking at the Mackenzie Art Gallery, printed in the Regi-

Clement Greenberg logically worked out the limitations and peculiarities of painting, which are a flat surface, the shape of the support and the properties of the pigment. These physical and material limiting conditions became positive factors.*

The appearance of the pre-eminent New York Art critic Clement Greenberg, gave birth to a new word: Clemsaid! Clemsaid to open the edges. Clemsaid to close the edges, etcetera, etcetera. “Clement Greenberg was a very powerful iconic figure in the world of art, using his position, and authority, to advance whatever he thought was worthwhile. Knowing what power was all about, and having an abundance of it, he thought nothing of it. When I met Clem at Emma Lake, I realized he definitely ranked as one of the few I’ve met who was completely focused. Caring only about art, he thought nothing of indicating directly to artists how to improve their work. You are probably wondering what he was doing outside of New York, and in Western Canada. ArtsCanada magazine had persuaded him to do a survey of art in the West and he was contracted to be the 1962 Emma Lake Artist’s Workshop leader. The Saskatoon sculptor Bob Murrary, who was living in New York at the time, was hired to guide him around. Clem was so powerful that many of those who attended the workshop fell completely under his spell. As he started to make the rounds of Saskatoon and Regina studios, many who had attended the Workshop follower to watch him dispense ‘Clem Justice’ along the way. Like a latter day Pied Piper, he led them studio to studio as dispensed ‘justice’, wisdom, and the uptown downtown lowdown jive on what was hip, and what was dip.”*

In 1976, Clement Greenberg, after leading a workshop at Emma Lake, turned to Ted Godwin and said, “Ted, the History of Canada is written in the Landscape.” This led Godwin to have an epiphany; he would create paintings that were “abstractions cleverly disguised as landscapes.”*

Dorothy KNOWLES A turning point in Dorothy Knowles career came at an Emma Lake Artists’ Workshop in 1962 when she was encouraged by Clement Greenberg, to pursue painting from nature regardless of the contemporary predominance of abstraction. ‘I found myself telling Dorothy Knowles to try and stop painting abstract. It was obvious her heart wasn’t in it.’ -Clement Greenberg talking to Allan Walkinshaw. Oshawa Interview, March 15, 1978. Joan Murray Artist Files, the Roberta McLaughlin Gallery, Oshawa, Ontario.

In 2000, the Portland Art Museum acquired the Clement Greenberg Collection of 159 paintings, prints, drawings, and sculptures by some of the most important artists of the mid-20th century. 5 works by Dorothy were included in this collection.*

Referring to the stem-paintings, Clement Greenberg called Lochhead ‘an original’ in a review for Canadian Art magazine, published in March 1963. Unfortunately, Greenberg dismissed many painters. Greenberg’s views had haunted the careers of many painters, including Lochhead, dividing artists into ideological camps. Many never asked for a ‘mainstream’ critique, although Lochhead did; ‘He wasn’t unfair to me. He was honest, and really helped me when I asked for his opinions. Sure, crits are hard to take sometimes but we need informed judgment on our efforts. There are so few good critics.’*

“The immersion and acculturation at Emma Lake, two weeks every August, resembled a ritual, the social surrender of old ideas through experiment in order to change. ...[It] suited Lochhead’s romantic symbolic art and reminded him of the Gatineau forest north of Ottawa. These early workshops with Canadian and American painters were an extension of the artist’s painting and development as an artist, an attempt to link local and international culture and create a vital regional art scene.” * Greenberg’s attendance and instructional was thus a huge contribution in the development and critical thinking of many that attended. His critique and ideas challenged and pushed boundaries.

Although Lochhead was late in turning to abstraction, by the 1962 Greenberg workshop he was holding his own. Lochhead quickly absorbed the ideas about a stripped down aesthetic.... Lochhead was at an exciting new threshold. To understand how the artist benefitted from Greenberg’s teaching is to consider this new freedom of colour afforded. Lochhead and his fellow artists were hardly pawns or victims of American cultural imperialism, but experimental painters who made some of the best paintings in Canada and certainly the West.*

“I was the last one of that whole group [the future Regina Five] to jump into the pool [abstract expressionism]. It was during Ferrer’s workshop that I started to play around.” *

Harold TOWN In Greenberg’s view, after World War II the United States had become the guardian of ‘advanced art’. He praised similar movements abroad and, after the success of the Painters Eleven exhibition in 1956 with the American Abstract Artists at New York’s Riverside Gallery, he travelled to Toronto to see the group’s work in 1957.*

Later [in his career], Town created the SNAP series as a way to refute Greenbergs idea. This series was conceived by Town as a way to challenge the dictumâ&amp;#x20AC;&amp;#x2122;s of Greenberg, who valued flatness in painting and opposed illusion. Town also included a barrage of external references in his work, which clashed against the post-modern autonomy prescribed by Greenberg.*

All rights reserved. No portion of this publication may be reproduced without written permission of the gallery DIRECTORS Heidi Hubner, Colette Hubner ASSISTANT DIRECTOR Elizabeth Carr

ClemSaid explores the relationships that this renowned critic had on 5 artists currently represented at Wallace Galleries. The five artists; Ronald Bloore, Ted Godwin, Dorothy Knowles, Kenneth Lochhead, and Harold Town each had their own experiences and opinions on Greenberg and his views on [Modern] art. As an influential art mind, Clement Greenberg impacted the Canadian art scene with his visits, and his brief or lifelong connection with each artist exhibited had an impact on their art career in one way or another. We invite you to enjoy the works and walk through a bit of history with each of these great artists... let your mind go & explore another world.