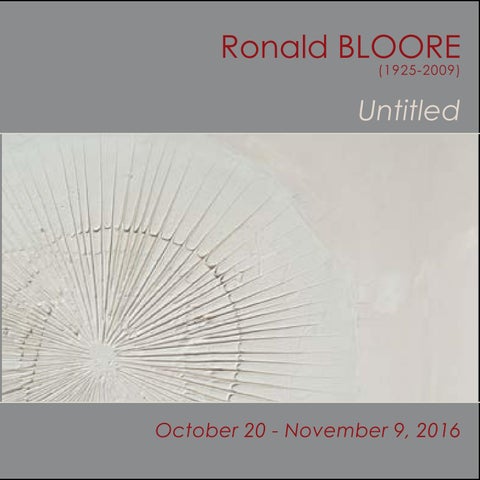 Wallace Galleries is one of Calgary’s most dynamic art galleries and home to many outstanding contemporary Canadian artists. Established in 1986 and located in the downtown core, our gallery is a family-run business with the goal of making art a part of your life as much as it is a part of ours.

“White paintings represent freedom for the viewer.” “They’re all untitled. Why restrict your imagination?” -Ron Bloore

“From 1958 to 2007 Ron Bloore dedicated his life to painting. In his secondary career as a gallery director, educator and commentator he fought for the understanding of artists as integral to civilized communities. Inspired by primitive art and ancient Egypt, Bloore painted about human experience in a way that is profound yet immediately accessible to anyone and everyone.” Preferring to leave his work untitled, Ron refuses to discuss the meaning or content of his art. He strongly believes this engages the viewer with the piece in an unrestricted way creating experience, feeling and meaning through personal perception.1 Image (right): Untitled (#980812), 1998, oil on hardboard, 36” x 48”

A Brief History on BLOORE

â&amp;#x20AC;&amp;#x153;Despite the austere geometric appearance of these works, the artist is a highly visual and lyrical painter. The elementary marks of the geometry retain an immediate expressiveness; the relaxed asymmetry and optimistic acceptance of accidental gestures reflect the artistâ&amp;#x20AC;&amp;#x2122;s subjective presence. We also witness a calm humour in these pictures as stable patterns are fractured to create illogical and dynamic designs...

The works construct alter-like bas-reliefs in paint... The open-ended geometry of the paintings is a web to ensnare our thoughts. In the autonomy of the works, Bloore exiles connoisseurship; he stresses literal painting, and quells false literary, psychic interpretations. He prompts us to relax speculation about the meaning... to admit response from the distant reaches of the psyche.”3

Bloore took a years leave from teaching in 1962 to go to Greece and Egypt which was a revalation for him. Here were powerful images, simplified, sophisticated, of extraordinary quality in constructionenduring. Here was the work of artists who had created images which expressed their culture, land and society for their society. ...Here were examples of art in which the the artists had evolved that powerful visual language Kadinsky dreamed of for Europe.

“Many contemporary painters have made pilgrimages to ancient archaeological architectural sites. None comes more immediately to mind than the Canadian Ronald Bloore, whose paintings are perhaps more profoundly affected by his experience of prehistoric and early art than any other twentieth century abstractionist. Egyptian and Greek reliefs, the architecture and the decorative arts of the Byzantine and of Islam, the prehistoric carving of the Inuit have been for him an inspiration not restricted to formal considerations but including recognition of the spiritual content of those early mythologies and sacred works that communicate across the centuries.”5

http://ronbloore.ca/Quotes.htm#q1; Joan M. Vastokas in The Roots of Abstraction: An Introduction; ArtsCanada, May/June 1979.

“[With major paintings,] the painting is totally preconceived and it’s really a technical problem to finish it... It’s a hell of a lot of work. It really is. I try to persuade people that painting is about 90% boredom. It’s five percent fun at the beginning and then it’s just a procedure of trying to complete the work. The last five percent is seeing how close you can get to the initial idea that you had before you say to hell with it, let’s get on to the next one. [But with inkworks,] they are the total opposite of the paintings. The paintings are preconceived, the drawings [after ‘79] are all automatic. I do them as fast as possible. It probably takes about an hour and a half to complete one. It’s a problem of trying to put something down very, very quickly, without preconception... you have to have [a] sense of experimentation. Then you hone it down... I remove all the tape and take a look at it for five seconds and decide yes or no. There’s no correction. There’s no change. There’s nothing. If I don’t like it I rip it up.”6