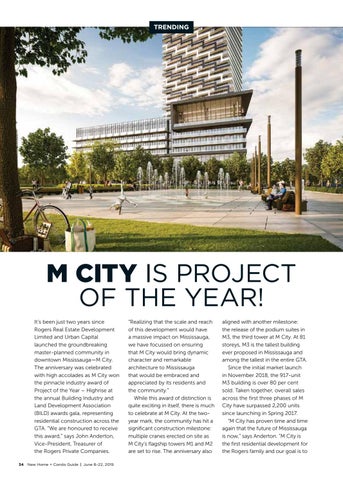 “Realizing that the scale and reach of this development would have a massive impact on Mississauga, we have focussed on ensuring that M City would bring dynamic character and remarkable architecture to Mississauga that would be embraced and appreciated by its residents and the community.” While this award of distinction is quite exciting in itself, there is much to celebrate at M City. At the twoyear mark, the community has hit a significant construction milestone: multiple cranes erected on site as M City’s flagship towers M1 and M2 are set to rise. The anniversary also

aligned with another milestone: the release of the podium suites in M3, the third tower at M City. At 81 storeys, M3 is the tallest building ever proposed in Mississauga and among the tallest in the entire GTA. Since the initial market launch in November 2018, the 917-unit M3 building is over 80 per cent sold. Taken together, overall sales across the first three phases of M City have surpassed 2,200 units since launching in Spring 2017. “M City has proven time and time again that the future of Mississauga is now,” says Anderton. “M City is the first residential development for the Rogers family and our goal is to