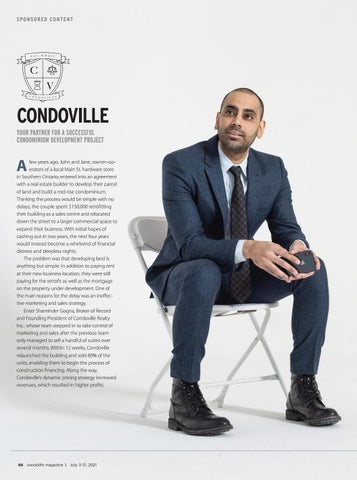 CONDOVILLE YOUR PARTNER FOR A SUCCESSFUL CONDOMINIUM DEVELOPMENT PROJECT

few years ago, John and Jane, owner–operators of a local Main St. hardware store in Southern Ontario, entered into an agreement with a real estate builder to develop their parcel of land and build a mid-rise condominium. Thinking the process would be simple with no delays, the couple spent $150,000 retrofitting their building as a sales centre and relocated down the street to a larger commercial space to expand their business. With initial hopes of cashing out in two years, the next four years would instead become a whirlwind of financial distress and sleepless nights. The problem was that developing land is anything but simple. In addition to paying rent at their new business location, they were still paying for the retrofit as well as the mortgage on the property under development. One of the main reasons for the delay was an ineffective marketing and sales strategy. Enter Shaminder Gogna, Broker of Record and Founding President of Condoville Realty Inc., whose team stepped in to take control of marketing and sales after the previous team only managed to sell a handful of suites over several months. Within 12 weeks, Condoville relaunched the building and sold 80% of the units, enabling them to begin the process of construction financing. Along the way, Condoville’s dynamic pricing strategy increased revenues, which resulted in higher profits. 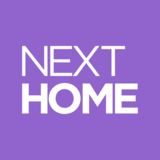