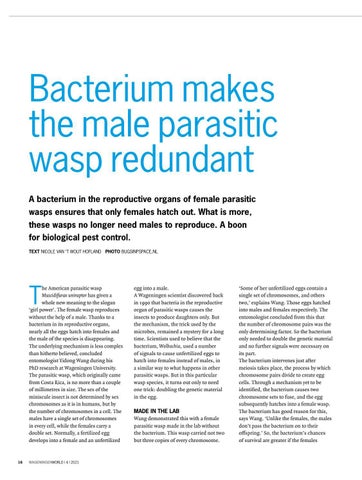 Bacterium makes the male parasitic wasp redundant A bacterium in the reproductive organs of female parasitic wasps ensures that only females hatch out. What is more, these wasps no longer need males to reproduce. A boon for biological pest control. TEXT NICOLE VAN ‘T WOUT HOFLAND PHOTO BUGSINPSPACE.NL

he American parasitic wasp Muscidifurax uniraptor has given a whole new meaning to the slogan ‘girl power’. The female wasp reproduces without the help of a male. Thanks to a bacterium in its reproductive organs, nearly all the eggs hatch into females and the male of the species is disappearing. The underlying mechanism is less complex than hitherto believed, concluded entomologist Yidong Wang during his PhD research at Wageningen University. The parasitic wasp, which originally came from Costa Rica, is no more than a couple of millimetres in size. The sex of the miniscule insect is not determined by sex chromosomes as it is in humans, but by the number of chromosomes in a cell. The males have a single set of chromosomes in every cell, while the females carry a double set. Normally, a fertilized egg develops into a female and an unfertilized

egg into a male. A Wageningen scientist discovered back in 1990 that bacteria in the reproductive organ of parasitic wasps causes the insects to produce daughters only. But the mechanism, the trick used by the microbes, remained a mystery for a long time. Scientists used to believe that the bacterium, Wolbachia, used a number of signals to cause unfertilized eggs to hatch into females instead of males, in a similar way to what happens in other parasitic wasps. But in this particular wasp species, it turns out only to need one trick: doubling the genetic material in the egg. MADE IN THE LAB Wang demonstrated this with a female parasitic wasp made in the lab without the bacterium. This wasp carried not two but three copies of every chromosome.

‘Some of her unfertilized eggs contain a single set of chromosomes, and others two,’ explains Wang. Those eggs hatched into males and females respectively. The entomologist concluded from this that the number of chromosome pairs was the only determining factor. So the bacterium only needed to double the genetic material and no further signals were necessary on its part. The bacterium intervenes just after meiosis takes place, the process by which chromosome pairs divide to create egg cells. Through a mechanism yet to be identified, the bacterium causes two chromosome sets to fuse, and the egg subsequently hatches into a female wasp. The bacterium has good reason for this, says Wang. ‘Unlike the females, the males don’t pass the bacterium on to their offspring.’ So, the bacterium’s chances of survival are greater if the females