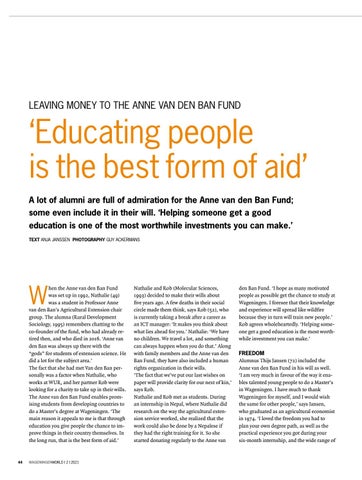 ‘Educating people is the best form of aid’ A lot of alumni are full of admiration for the Anne van den Ban Fund; some even include it in their will. ‘Helping someone get a good education is one of the most worthwhile investments you can make.’ TEXT ANJA JANSSEN PHOTOGRAPHY GUY ACKERMANS

hen the Anne van den Ban Fund was set up in 1992, Nathalie (49) was a student in Professor Anne van den Ban’s Agricultural Extension chair group. The alumna (Rural Development Sociology, 1995) remembers chatting to the co-founder of the fund, who had already retired then, and who died in 2016. ‘Anne van den Ban was always up there with the “gods” for students of extension science. He did a lot for the subject area.’ The fact that she had met Van den Ban personally was a factor when Nathalie, who works at WUR, and her partner Rob were looking for a charity to take up in their wills. The Anne van den Ban Fund enables promising students from developing countries to do a Master’s degree at Wageningen. ‘The main reason it appeals to me is that through education you give people the chance to improve things in their country themselves. In the long run, that is the best form of aid.’

Nathalie and Rob (Molecular Sciences, 1993) decided to make their wills about five years ago. A few deaths in their social circle made them think, says Rob (52), who is currently taking a break after a career as an ICT manager: ‘It makes you think about what lies ahead for you.’ Nathalie: ‘We have no children. We travel a lot, and something can always happen when you do that.’ Along with family members and the Anne van den Ban Fund, they have also included a human rights organization in their wills. ‘The fact that we’ve put our last wishes on paper will provide clarity for our next of kin,’ says Rob. Nathalie and Rob met as students. During an internship in Nepal, where Nathalie did research on the way the agricultural extension service worked, she realized that the work could also be done by a Nepalese if they had the right training for it. So she started donating regularly to the Anne van

den Ban Fund. ‘I hope as many motivated people as possible get the chance to study at Wageningen. I foresee that their knowledge and experience will spread like wildfire because they in turn will train new people.’ Rob agrees wholeheartedly. ‘Helping someone get a good education is the most worthwhile investment you can make.’ FREEDOM Alumnus Thijs Jansen (72) included the Anne van den Ban Fund in his will as well. ‘I am very much in favour of the way it enables talented young people to do a Master’s in Wageningen. I have much to thank Wageningen for myself, and I would wish the same for other people,’ says Jansen, who graduated as an agricultural economist in 1974. ‘I loved the freedom you had to plan your own degree path, as well as the practical experience you got during your six-month internship, and the wide range of