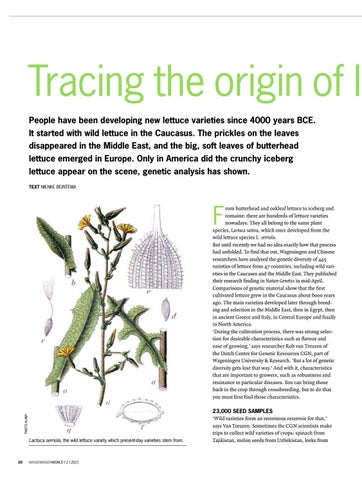 Tracing the origin of l People have been developing new lettuce varieties since 4000 years BCE. It started with wild lettuce in the Caucasus. The prickles on the leaves disappeared in the Middle East, and the big, soft leaves of butterhead lettuce emerged in Europe. Only in America did the crunchy iceberg lettuce appear on the scene, genetic analysis has shown. TEXT NIENKE BEINTEMA

rom butterhead and oakleaf lettuce to iceberg and romaine: there are hundreds of lettuce varieties nowadays. They all belong to the same plant species, Lactuca sativa, which once developed from the wild lettuce species L. serriola. But until recently we had no idea exactly how that process had unfolded. To find that out, Wageningen and Chinese researchers have analysed the genetic diversity of 445 varieties of lettuce from 47 countries, including wild varieties in the Caucuses and the Middle East. They published their research finding in Nature Genetics in mid-April. Comparisons of genetic material show that the first cultivated lettuce grew in the Caucasus about 6000 years ago. The main varieties developed later through breeding and selection in the Middle East, then in Egypt, then in ancient Greece and Italy, in Central Europe and finally in North America. ‘During the cultivation process, there was strong selection for desirable characteristics such as flavour and ease of growing,’ says researcher Rob van Treuren of the Dutch Centre for Genetic Resources CGN, part of Wageningen University & Research. ‘But a lot of genetic diversity gets lost that way.’ And with it, characteristics that are important to growers, such as robustness and resistance to particular diseases. You can bring those back in the crop through crossbreeding, but to do that you must first find those characteristics.