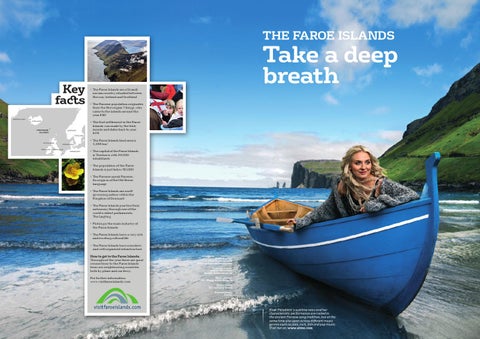 Eivør Pálsdóttir’s sublime voice and her characteristic performance are rooted in the ancient Faroese song tradition, but at the same time also span across different music genres such as jazz, rock, folk and pop music. Visit her on: www.eivor.com

Challenge the mountain, engage nature’s might Steep mountains surround the villages and towns. They carry millennia on their backs. Cleft by black gorges, separated by deep valleys, lakes and brooks. By the violent force of the storms. They bear witness to the struggle for survival. The grand, untouched landscape lies unexplored before your feet. Nature unfolds in all its might and roughness in front of your eyes. Occupy those mountains. Challenge the heights. Meet nature.

18 islands in the middle of the North Atlantic The Faroe Islands archipelago consists of 18 islands stretching over 118 km, from Enniberg in the north to Sumbiar Steinur in the south. The highest mountain, Slættaratindur, is 882 m and is frequently scaled by Faroese as well as foreigners. Tunnels and bridges tie many of the islands together making travelling around the islands easy and accessible. If you wish to walk the islands in their entirety, it would take roughly a week.

Sunleif Rasmussen, the Faroese contemporary classical composer, finds inspiration in the Faroese nature, which therefore is a meaningful element in his work. Let him challenge your ears with his music on: www.sunleifrasmussen.com

Fly with the seabirds’ song 260 bird species in the islands Ornithologists have identified over 260 species of beautiful birds in the Faroe Islands. Of these, roughly 40 of the species remain in the Faroe Islands year round and about 40 are rare or sporadic visitors. The isle of Mykines is an eldorado for those who enjoy watching fascinating birdlife. Here one can also get close to the charming and legendary puffin.

Vertical cliffs. The dizzying, deep precipice drops hundreds of metres below you. The roar of the ocean and the deafening collision of the surf against the black rocks have set the tone since time began. Thousands of birds mill about in and out in an unfathomable pattern. While nesting, they sing in a choir you’ve never heard before, in a choir you’ll never hear again.

An exploratory journey through the Scandinavian heritage Small, turfed wooden houses lean against young, straight buildings of glass and steel, where the sun’s rays reflect angles and expressions that reveal the will and courage to tread new and different paths. The materials and styles of modernity in villages and towns at times make up a provocative and awkward, at other times a humorous, cautious and respectful interplay with the heritage of the past, which is continued through the resonance of the young generation.

Unique Faroese architecture The inhabitants of the Faroe Islands are descendants of the Norwegian Vikings who brought their building style along with them. Old Faroe houses are typically black with turfed roofs insulating well against the harsh weather. The former US President, Bill Clinton, remarked during his visit to the Faroe Islands, ‘if everyone built houses in this tradition, global warming would hardly be a problem.’

Rannvá Kunoy’s abstract paintings open doors into the innermost realm, where no one seems to have been before. Read about her on Wikipedia.

Feel the fresh sea breeze The meeting with the ocean evokes thought and wonder at the movement of the earth. Ebb and tide. Lifeâ&#x20AC;&#x2122;s cycle and brittleness. The encounter of sky and sea, the contact between man and nature. A stay on the billowing element. A nation of fishermen through centuries. Survival or loss. Dependence and surrender. Faith and hope. Fish, whale, seaweed, mussels and the creatures at the bottom of the sea live their secret life in the salt water. The fish is fresh, the sea breeze is refreshing, and breathing is unrestrained.

The Faroese metal band TĂ˝r has strong roots in Nordic mythology and in the Faroese ballad tradition. Follow them on www.tyr.fo

Several ocean currents meet around the Faroe Islands The Gulf Stream surrounds the Faroe Islands and meets cooler ocean currents from the north. This leads to a varied and teeming fish life in Faroese waters. No less than 241 fish species have been caught in Faroese waters. The stable low marine temperature from 6 to 12 degrees and consequent slow growth, gives the fish firmer flesh and is the reason why Faroese fish is considered to be the best in the world.

Barbara í Gongini’s avant-garde garments are characterised by a raw, dark, Nordic fairy tale aesthetic and may be perceived as pieces of art in which you may dress. See her collections here: www.barbaraigongini.dk

The Land of Maybe The expression “The Land of Maybe” dates from World War II, during the time in which the British occupied the islands. When they asked the Faroese about something, the answer often was “maybe” or “kanska” in Faroese. The Faroese are noted for having a relaxed attitude toward time as their daily activities are often dependent upon the Faroe Islands unpredictable and unexpected weather patterns.

Experience the luxury of slowness The speed of one’s thoughts slows. Stillness takes over the restlessness and hectic tempo of daily life. The clock slows down. Time moves less fast. There is more space between heartbeats. The soul ages at a lesser pace. The ease of existence is felt as an inestimable luxury. Silence descends upon man and land, and the days languish. Do you feel the easy pulse of an existence where delay and peace of mind are valued as a quality and as a welcome part of life?

The town’s young pulse beats in the old streets The 200 year old Cathedral shares the streets of Tórshavn with modern, sparkling architectural gems, cafés, boutiques, churches, corrugated roofs, parks, cinemas, museums and little outhouses in an attractive jumble. Go on a discovery in a town where faces are recognizable, where sailboats and fishing boats lie lolling in the harbour, where the evening is filled with laughter and adventure. Where the lighthouse at the old fortress throws its beam across the fiord, where the scent of sea and tar mix with newly ground coffee and happy voices.

The Faroese national football team is the tale of one of the world’s smallest football nations, which manages to surprise against the big stars. Follow their tireless struggle for victory and survival against all odds here: www.fsf.fo

Feel the rhythm – hear the sounds and strings of the heart The ballads and pop music move at a steady beat hand in hand, side by side in endlessly bending circles in a chain dance. The popular tales continue into the winding patterns of the Faroese national costume. They are passed on. They find new expression through generations. The tall tales of the ballads about knights, their rhythms and stories are reborn in rock music. The spiritual hymns are reborn on the alternative stage. The music, the rhythms and the dreams travel across the world’s oceans – to return to their country of origin with new inspiration. With new narrative content.

Teitur Lassen’s repertory spans from singer-songwriter to the pop genre. From Faroese to English. The young artist’s music is a tranquil journey into the human soul, thoughts and observations in and of a globalized world. Enjoy his music here: www.teitur.com 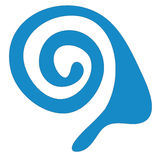