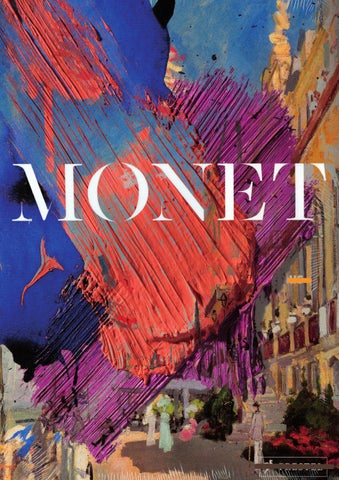 The cover of Sotheby’s London Impressionist and modern art sale catalogue of February 2015 features Monet´s “Les Peupliers à Giverny’’. Sotheby’s has auctioned the work on Feb. 3 and it was sold for 10,789,000 GBP. This sale is particularly interesting because of the seller—the Museum of Modern Art in New York. The market is now so distorted and tilted toward contemporary art that 10 million GBP raised from the auction of a Monet is less than the cost of a large work by a contemporary art star like Andy Warhol, Gerhard Richter, Jeff Koons, and many others. Some works are considerably more than that. Is it really worth trading a Monet for a slice of Koons´s hanging locomotive? Since art and money go together like peanut butter and jelly, Peter Vahlefeld´s new paintings are the perfect metaphor for our twenty-first-century. One Century spent de-coding and re-constructing art history, a system so complex and contradictory in the hopes that something more than the sum of its parts might be communicated and devoted to emptying art of everything except what Karl Marx righteously called commodity fetish. As the English critic John Berger first argued in »Ways of Seeing«, oil painting as we know it is innately materialistic. The paint is a kind of material and when it is applied to canvas the result is an image that is essentially a kind of property that can be bought, traded, and moved from place to place—as well as photography, which has been associated with materialism since its invention. Despite its relative lack of physical presence compared to painting, photography serves to record the material reality in front of the lens. Historically, it is a product of our materialistic, industrial age. But today in our digital world—a world where everything is being instantly, infinitely and indefinitely reproduced—virtually anything from trash to home mortgages to art, may be monetized, in other words exchanged on an international market in an abstracted representational form. By treating digital prints in the same manner as painters treat canvas, Peter Vahlefeld tends to dematerialize both mediums, focusing on the interface between analog and digital painting. He recognizes that works of art in a capitalist culture inevitably are reduced to the condition of commodity. What he does is to short-circuit the process and start with the commodity—he over-paints advertisements for international galleries, museums, auction houses, and museum shop merchandising that form the base of his paintings. As it happens, the camera, the scanner and the computer have been comfortably assimilated into the practices of most contemporary artists. Peter Vahlefeld´s overpaintings of printed matter are scanned, over-painted again on his computer, before being transferred to canvas to be over-painted again, digitized again, and so forth, becoming a conceptual and formal construct, from the heterogeneous combining of elements. However, these works use technology rather than reflecting on digital visuality per se, hovering between the painted and the printed image, striving for something beyond both. Painting with photography and print and the refinement of modernist art with the vulgarities of mass cultural representation forces us to consider how we interpret

media and advertising. Do we accept mass media at face value, or do we view the world through coloured glasses? The history of art is being constantly rewritten according to the demands of the present, piecing fragments of the old together to form a visual language, which resonates with the contemporary consumer. Nothing coheres in a way that could be said to have substantive narrative dimension or pictorial legibility, except for visible stops and starts that prod the limits of content. We read snippets like »Hermitage«, »Museo del Prado«, »Chardin«, »Von Matisse zum Blauen Reiter«, etc. Other words are fragmented or superimposed to the point of eligibility. Traces of subtractions—the scraping off of layers of pigment—are as central to his process-based works as the scratchy lines of the sanding machine or the iridescent staining with heavy oil paint by the broom. Like a kid in a candy store, it seems to Peter Vahlefeld that the entire history of art and image making is present at the same time—it´s all now. His paintings distort art historical references deconstructing the role of abstraction in both modernism and contemporary art practice. Recognizable visual codes and references like logos, gallery names, exhibition titles, quotes from art history, prices from auction house catalogues, and names of artists such as Andy Warhol, Cy Twombly, Georg Baselitz, and David Hockney pop up. Peter Vahlefeld´s abstractions unite high art and popular culture as unorthodox tableaux of unequivocal beauty. Built up in sensuous layers of inkjet prints and paint, ranging from silky and skinlike to oily and singed, he offers abstraction in his grid-like compositions with an urban flair that´s explosively contemporary. Evolving his surface as a highly textured topography, Vahlefeld uses gesture and mark making to encapsulate the dissonance and excitement of a metropolitan media landscape. Each work confounds expectations and provokes another painting and a new set of challenges. Painting thus, for the artist, is a practice of overlaying multiple images in which one mark leads to the next–and one completed work leads to another. One over-painted advertisement superimposed over another one to be overpainted again. The layers of paint are worked and reworked over long periods of time; each layer contains a shade of the past layer, and so forth. Peter Vahlefeld establishes a totally new and complex relationship between the painted and the digitalized image of paint. The power of the image has turned against itself, partly or entirely defaced. The highly stylized »Untitled Painting on Andy Warhol´s Orange Marilyn by Christie´s« epitomizes the polished allure of luxury consumer culture. The »Warhol-Paintings« of over-painted auction house catalogue pages are not simply riffing on the recent »hotness« in the Warhol market and then slightly supplemented by trying to cash in on reputation, brand, and logo but they become a canvas for making a comment about the art-market-as-commodity-bubble which has burst all over everyone´s faces, like a big rainbow-coloured spunk-bomb made of liquid cash. Higher. Faster. Farther. The ability to reproduce images, higher, faster, farther is at the base of our entire culture now and »Institutional Critique« in which artists criticize the institutions they‘re forced to inhabit does plug in rather perfectly to the insane contemporary art market, where culture exists in a state of simultaneity, and where all of art history and institutional critique is equally available for use. Much of the work categorized as »Institutional Critique« since the late 1960s parodies the power of art without either adequately defining it or coming close to actually extinguishing it. Asserting that a work of art is a function of the framing

conditions of the museum or other art world institutions is certainly not false, but it tends to accept the museum´s ideological self-presentation on its own terms as a given rather than exploiting its complex format more creatively or to bypass the art world altogether. Every day we are seeing nonstop; every day there are a myriad of images being dumped into our awareness. The various categories, media and histories become materials to use like the institutions you inhabit. In a literal depiction of a graveyard, Peter Vahlefeld presents the canon of art history as a hallowed myth, resonant beyond its expiration date of the latest contemporary evening auction or museum shop calendar. Their self-consciously brutal surfaces seem to be corrupted from within. A decoded script of interrupted image and muted texture takes its pleasure in contrast and surface humorously critiquing the hallowed respect and predominant values of art history, which have to be monetized by auction houses in order to gain value. What has happened that has made images the focus of so much passion? Museums are jam-packed with massive queues and people running frenetically not to miss their allocated time slot. Big institutions must be given credit for making contemporary art available to the masses, and that´s obviously very important, but regrettably, at the same time, the individual experience has been heavily compromised—except for the museum shop, which amalgamates past, present and future with merchandising providing a platform for fridge magnets, coffee mugs, puzzles, cushions, etc. Vahlefeld´s over-paintings of museum shop merchandise draw on the symbiotic relationship between high art and commerce, exploring the »un-reality« where art becomes fashionable and this fashion excessively cheap. Fridge magnets with Vincent van Gogh´s Sunflowers for 5 GBP; T-Shirts, tattoo templates and even toilet paper with the same motif for 3 GBP. The quaint old notion of the museum as a haven for the contemplation of the art it owns has given way to the museum as a cog in the exhibition-industrial complex of shopping malls, to put on an endless list of exhibitions, to satisfy show-addicted visitors, tourists, critics, sponsors, trustees, politicians. And if the show is sold out, please apply for tickets online a minimum of several weeks in advance !!! By embracing digital innovations and state-of-the-art marketing strategies, museums have finally embedded themselves in the mass culture machine as well. Museum shop merchandise and their surface of art are used as a means of seduction or ridicule; they appear highly plasticised, saturated in gloss and permeated by sensuality. To confront the binary of oppositions, which pervades contemporary art, Peter Vahlefeld deconstructs, reconstructs and abstracts these surfaces; knowing how to work with materials loaded with symbolism in order to suggest something else. The notion that art has some inherent value is the central and most productive illusion of the art market. The rhythms of production, distribution, and consumption are now key, not the things in themselves, that characterizes our cultural moment at the beginning of this new millenium. Richard Mutt

At home he feels like a tourist, Galerie Brennecke, Berlin (Catalogue)

At home he feels like a tourist, Galerie Winkelmann, Düsseldorf (Catalogue)

Featured in: Highlights of the Year; Inside the Studio; Our Curator´s Picks; Saatchi Gallery, London/

Since art and money go together like peanut butter and jelly, Peter Vahlefeld´s new paintings are the perfect metaphor for our twenty-first-century. As the English critic John Berger first argued in »Ways of Seeing«, oil painting as we know it is innately materialistic. The paint is a kind of material and when it is applied to canvas the result is an image that is essentially a kind of property that can be bought, traded, and moved from place to place. Works of art in a capitalist culture inevitably are reduced to the condition of commodity. What Peter Vahlefeld does is to short-circuit the process and start with the commodity—he over-paints advertisements for international galleries, museums, auction houses, and museum shop merchandising that form the base of his paintings. 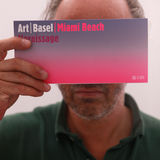