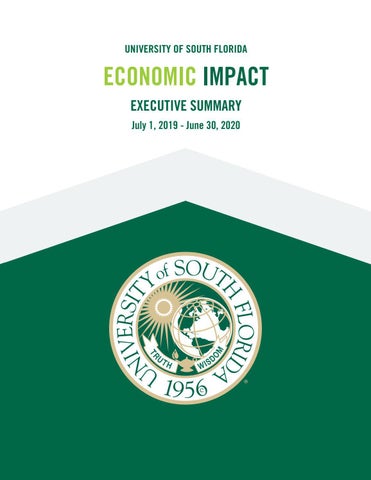 The University of South Florida has strategically leveraged its status as a world-class public urban research university for maximum social and economic impact throughout the Tampa Bay region and the state of Florida.2 Serving more than 50,000 students, USF had an annual budget of $1.85 billion and annual economic output of $6.02 billion in the state of Florida in the 2019-20 fiscal year. With 244 degree programs, 2,400 patents and an academic medical center that offers patient care through more than 1.08 million patient visits annually, USF not only adds to the vibrancy and strength of the regional economy as a center of knowledge and culture, but also serves as an economic catalyst through its robust innovation enterprise — the multi-faceted effort to advance technology transfer through patents and licensing, faculty startups, public-private partnerships, and the USF Research Park.3 In this report, the breadth and depth of USF’s economic impact can be seen in all aspects of the university’s operations — from the students it educates, to the faculty and professional staff it employs, to the talented professionals and entrepreneurs who power a modern innovation economy, to the construction projects that shaped the campuses in Tampa, St. Petersburg and Sarasota-Manatee. In all, the university contributes 68,704 jobs, $2.56 billion in earnings, $3.82 billion in GDP and $6.02 billion in economic output. The American economy is deeply intertwined with the size and intellectual reach of its research universities, where economic impact is driven by the interplay between universities, firms, entrepreneurs, research labs and inventors.4 As one of Florida’s largest urban research universities, USF generates economic impact through: • Operations • Construction • Student spending • Research and innovation • Visitor spending on sports events The university employs 16,2775 people, making it the 14th largest public employer in the state of Florida. Importantly, many of the jobs supported by USF are in high-skill, high-wage, knowledge-based industries, such as life sciences, information technology and financial services USF further generates fiscal impact through tax revenues to federal, state and local governments. In 2019-20, USF-related spending generated more than $600 million in federal, state and local tax revenue, mostly generated by sales, property and personal income taxes. This tax revenue helps support regional development, as every dollar in state support to USF generates total tax revenue of $1.41.

As one of just 56 public research universities nationwide classified as a doctoral university with “Highest Research Activity” by the Carnegie Foundation for the Advancement of Teaching, USF has systemically adopted the Carnegie Foundation’s definition for Community Engagement as “collaboration between institutions of higher education and their larger communities for the mutually beneficial exchange of knowledge and resources …” While younger than many of its institutional counterparts and consistently producing year-overyear gains in new annual grants and contracts and research expenditures, the impact of USF research and innovation is not only demonstrated in dollars spent or patents accumulated but also on the economic vitality of Tampa Bay in particular and Florida in general. In 2020, the George W. Bush Institute (the policy arm of the Bush Presidential Center), Southern Methodist University and venture development firm Opus Faveo Innovation Development ranked public and private American institutions on a series of metrics and placed USF at 13th in productivity among 54

The Innovation Impact of U.S. Universities: Rankings and Policy

large institutions with an average annual research spending of more than $330 million.7 In many ways, USF is representative of the importance and influence of research universities, particularly those located in urban settings, in shaping the regional and state knowledge economy, as leading economists have noted on a global scale. “We show that the relationship between GDP per capita and universities is not simply driven by the direct expenditures of the university, its staff and students. Part of the effect of universities on growth is mediated through an increased supply of human capital and greater innovation,” said Anna Valero of the London School of Economics and John Van Reenen of the Massachusetts Institute of Technology in their 2018 global analysis.8 The university also plays an important role in the building and strengthening of more inclusive communities where education and economic opportunities

build bridges across long-standing societal barriers. About half of USF’s students and about 37% of its employees are non-white (36% of faculty and 39% of other staff). Moreover, at USF the six-year graduation rate for the 41% of students who are recipients of Pell grants — the federal student assistance provided for the most economically challenged families — is nearly equal to the graduation rate for students from more privileged backgrounds. USF also has been nationally lauded for largely eliminating the achievement gap based on race.9 As corporations relocate to the Tampa Bay region and homegrown enterprises grow, the strength, depth, skill and diversity of talent is critical to the success, stability and sustainability of the regional economy and raising the standard of living for all.10

Researchers performed the Input-Output analysis to estimate the economic and the fiscal impacts of USF on the state of Florida in the 2019-20 fiscal year using the IMPLAN modeling system.

• Every dollar in state funding helped generate $14.07 in economic output.

effects (indirect and induced economic effects), supported 68,704 jobs in Florida. Importantly, many of the jobs supported by USF’s research enterprise are in high-skill, high-wage knowledge industries.

3. Every dollar in state support leveraged $3.33 from other

non-state-government sources for USF during the 2019-20 fiscal year. These funds help USF deliver high-quality educational services that attract more than 50,000 students annually and build a research and innovation enterprise that works to produce new knowledge and technologies. • In 2019-20, in addition to the Florida taxpayer money provided to support the institution, USF generated $1.43 billion in additional revenues, including from the federal government, the private sector, auxiliary enterprises and intercollegiate athletics.13 • State funding over the years has helped USF to develop as the fastest-rising public university in the nation over the last decade.14

contracts and grants.15, 16 USF’s commitment to research and innovation is evident from the fact that USF’s faculty, staff, students and alumni collectively hold more than 2,400 U.S. patents as of 2019. USF is eighth among American public research universities and 16th among all universities worldwide in generating new patents, according to the 2020 report of the National Academy of Inventors and the International Property Owners Association.17 The ranking places USF as a leader among the more than 1,000 academic institutions generating new, novel and useful inventions granted intellectual property protection from the U.S. Patent and Trademark Office. The IPO additionally has recognized USF in the top 300 of patent producers worldwide in eight of the last 11 years. USF’s standing as a leader in technology transfer generates significant economic development impacts for the Tampa Metropolitan Statistical Area and throughout Florida, the Washington Economics Group found in its 2019 analysis of the USF Innovation Enterprise.18

5. In the last several years, USF Health has achieved continuous

development in the quality and quantity of clinical care and research along with enhancing the quality of the services and educational offerings provided to the students. • In the fiscal year 2019-20, USF Health logged a total of 503,316 outpatient visits. The total number of telehealth visits since March 2020 was 162,000.19 • USF Health Morsani College of Medicine and Heart Institute now serves as an anchor tenant for downtown Tampa’s transformative Water Street District development, bringing approximately 1,800 students, faculty and staff to live, work, study and conduct research along the downtown waterfront and contribute to the district’s knowledge economy. The Morsani College of Medicine is the centerpiece of what has become the first neighborhood worldwide to achieve the WELL Community Standard, which entails design and policy strategies meant to improve the lives of its residents through the built environment.20 Locating the Morsani College of Medicine and Heart Institute downtown brings USF Health students, faculty and researchers closer to the university’s primary teaching hospital, Tampa General Hospital. This closer proximity and the enhanced research partnerships it generates increases the college’s eligibility for federal research funding, which in turn creates new jobs and attracts life science companies to Tampa, sparking at least $2.35 in local economic activity for every $1 in funding from the National Institutes of Health.21

In terms of social impact, USF helps break the cycle of poverty, evidenced by its continued efforts in uplifting first-generation and low-income students. One out of every four USF students is a first-generation student,22 and 41% of USF’s students support their education with federal Pell grants,23 which are awarded to undergraduate students with exceptional financial need. USF fosters gender, racial and ethnic diversity and equity not only in the student community, but also in its work force. About half of full-time students at USF are non-white. About one-third of USF’s faculty are non-white and about 40% of USF’s staff are non-white.24 As a community standard bearer, USF strives to create an inclusive environment for people of all races, colors, genders, ages, national origins, religions, ability, familial status, sexual orientation, gender identities and expressions. Equal opportunities with respect to education and jobs can generate a wide range of economic benefits for the communities USF serves.25

In this Executive Summary, the breadth and depth of USF’s economic impact can be seen in all aspects of the university’s operations — from the students it educates, to the faculty and professional staff it employs, to the talented professionals and entrepreneurs who power a modern innovation economy, to the construction projects that shaped the campuses in Tampa, St. Petersburg and Sarasota-Manatee. In all, the university contributes 68,704 jobs, $2.56 billion in earnings, $3.82 billion in GDP and $6.02 billion in economic output.