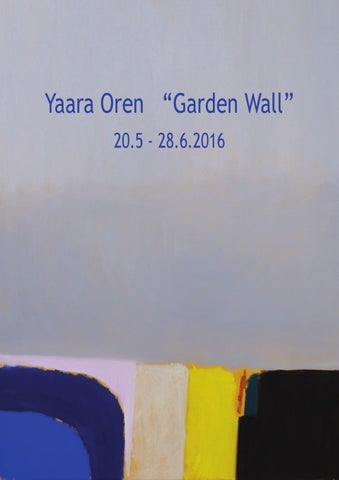 The painting as the text

We wander the streets of south Tel Aviv and converse about and contemplate art, and painting and the boundaries between image and words. The works presented in this exhibition represent a continuous engagement with image, with contemplation and with the surroundings and reflect a process from the past couple of years whereby the artist is transforming from figurative painting to abstraction and decomposition. Yonatan: Let’s talk about painting Yaara: Painting is an interesting place to meet oneself, to reflect what composes you and to understand how to construct something with it. It is a source of correction and betterment. This is where I can look at myself and say, ‘Wow what a cheapskate you are for working with the paint you have left on the brush so as not to waste it’… but I will find how to utilize it. This is where I can look at myself and my behavior and I am able to operate or to self-examine. I try to restrain myself and not to be tempted to be the painter that I am not supposed to be.

What is the significance of an exhibition from your perspective? If you ask me why I paint, it is for my experiences in my studio. The studio is a fascinating place and when there I do not think of potential viewers. When people start telling me what they see in my paintings, it does not interest me. I am interested only in the experience of painting. After that I just want you to say to me “How beautiful, everything is wonderful”. And really I question why should anyone see them. For me, this is an attempt to mediate the subjective experience, to bridge the unbearable separation between people. Never can I completely know who you are and you can never fully know who I am. You can, for example, tell me about a movie you’ve seen, and as much detail as you give, I cannot feel what you have experienced. Even if we see the movie together, I cannot experience what you felt. An exhibition is an attempt to bridge this gap. The optimal viewer is one who undertakes this task and envisions “you”. Your painting is influenced by the places you go to and the things you see in south Tel Aviv

I live here. These are my surroundings, that is the point. If you frame every part of the street where we now wander, immediately you notice the various shapes and patches. These forms find their way into my work and connect to my immediate surroundings, my home, my yard. For me, painting is a translation of experiences that become a mash-up. What is important for you to include in the works? I do not need anyone who looks at the paintings to feel the neighborhood of Shapira. Nevertheless, the domestic chaos is instilled in my work, some kind of rhythm. Only now I am beginning to understand the Israeli light, that although I did not think affects me, is very present in my paintings. Walking around here all afternoon we notice the texture is doubled. Their shadow becomes an additional visual text. Israeli light creates a negative This contrast greatly affects the color. The shadow is something I like to refer to in the painting. To paint shadow, to think shadow. What is in it? Shadow is the most interesting element. It’s like a derivative of something, its flatness, its emptiness. A condensing of an object’s form. Shadow pursues the object and proves its existence. I attempt that every painting should include something local. In the past I would try to avoid this, yet today I am interested to find the points at which I am able to instill the location into my works, to discover and to reveal that point although it came about unintentionally. What do you mean? I see on the streets a strong contrast and visual clutter, or a feeling that reality always remains undone. This is also interesting in painting, whether it is complete or not. That’s a question I can ask about this place - is it complete or incomplete. Your path to painting passed though photography I do not necessarily feel the need to be faithful to reality. People were always asking me “where is it?”. I never hung out in exotic places or places that nobody goes. It was always Hayarkon Park or someplace similar. It always emphasized to me how people are non-observing. You really do not care to be faithful to reality? I cannot exist completely in fiction or in abstract. This is always my conversation—with reality. I want to include something deriving from life experience. In the past, I would work with a photographic image, until something started to limit me and enclose me. I am not interested now to work with images, rather to work from within the material. This is a different experience, the reference becomes that which is absorbed within you. It requires constant concentration and attention throughout the day and particularly while painting. Give me an example If I see a bird building a nest in the garden, I need to watch intently to see how it builds, and what motion it performs in order that something will remain with me. Minor experiences interest me more than dramatic ones. Look now at the color of the sky. If you were to photograph it and show to a photography teacher, he would say that we have to balance the colors. That is not how the sky should appear. That is part

of the interesting aspect, in my opinion of painting, to pay attention to these things. In our conversation you set boundaries. In my opinion, your painting, in contrast, is the opposite, and deals with breaking the previous limits that you set As one who is very much in control, the painting is my place to be free. The painting is where I try constantly to be challenged, yet keep it open as much as possible. Borders exist, perhaps, more in speech. My need to explain things is minor. This is something, I understand, that some people find necessary. To explain the painting? I would do an exhibition with no text. If you ask me what I want to accomplish with the text? Nothing. The painting is the text. To me, the picturesque gestures, how paint is applied, whether thick or thin is far more important, juxtaposition of color. The painting is not necessarily “happening” in its totality, rather all sorts of little stories are hidden within. It could be a meeting of two spots of color and there is where the painting “happens”. There will be the strength of the work. Do the names of the works have meaning? There is a phase of the painting whereby it is not clear the direction. The colors do not yet get along, the composition does not work, it does not look like a painting. It’s like a power struggle. Then suddenly there is a spark, I am reminded of something and this something allows me to give the painting its name. At this point it becomes clear to me how to work with it, the identity of the painting, what needs to be and what does not. There was a painting that I was working on and suddenly I realized that it will be named “Daughter’s Room”. It relates to a story of a friend named Liat. Her parents always wanted a son, so in their home they reserved a room—“Son’s Room”. I created for her “Daughter’s Room”. It became a tribute to her. Once the name of the painting became “Daughter’s Room”, boundaries developed in this direction. The painting does not need to look like a room nor be colored pink, but it became more clear to me what does need to be in the painting, because this is “Daughter’s Room”. Many of the paintings have such hidden stories. That help you decide what would be in them Yes. If for example there is something that I do not quite understand, but it has a rationale, even if this story frame only exists for me, it will let me live in peace with what goes on in the painting. Painting has such chaotic behavior that something must enclose it. Has the name of the exhibition helped you decide which works will be shown Yes, I named the exhibition ‘Garden Wall’. The rythm of the words is important to me. I do not need them to express something concrete, just to set the atmosphere, to give the impression that it might be something that exists. I do not want that it should exist in reality, rather to give an impression that it could possibly exist. There is also a division among the works. Some depict a wall, blocking the viewer’s vision from what occurs beyond. Some are the garden, or open space. I desire this tension.