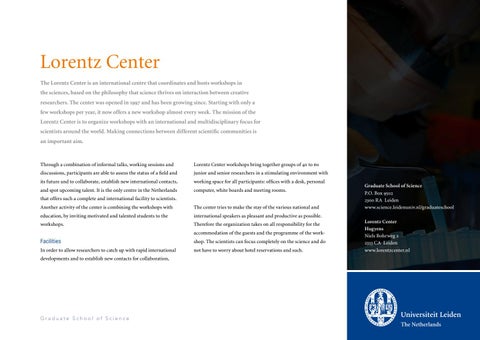 Lorentz Center The Lorentz Center is an international centre that coordinates and hosts workshops in the sciences, based on the philosophy that science thrives on interaction between creative researchers. The center was opened in 1997 and has been growing since. Starting with only a few workshops per year, it now offers a new workshop almost every week. The mission of the Lorentz Center is to organize workshops with an international and multidisciplinary focus for scientists around the world. Making connections between different scientific communities is an important aim.

Through a combination of informal talks, working sessions and

Lorentz Center workshops bring together groups of 40 to 60

discussions, participants are able to assess the status of a field and

junior and senior researchers in a stimulating environment with

its future and to collaborate, establish new international contacts,

working space for all participants: offices with a desk, personal

and spot upcoming talent. It is the only centre in the Netherlands

that offers such a complete and international facility to scientists. Another activity of the center is combining the workshops with

education, by inviting motivated and talented students to the

international speakers as pleasant and productive as possible.

shop. The scientists can focus completely on the science and do

In order to allow researchers to catch up with rapid international

not have to worry about hotel reservations and such.

developments and to establish new contacts for collaboration,

Workshops at the Lorentz Center can be proposed and organised

into great workshops. The staff of the Lorentz Center advises on

by any researcher from any country. Workshops organised by

a certain field of science.

ties are encouraged. Selection of the workshops is primarily based on scientific quality, and factors like impact and the interest from

Besides the workshops, the Lorentz Center also offers the Lorentz Fellowship programme. This is a joint venture between the

The Lorentz Fellowship programme is a joint venture

Proposals for workshops are reviewed by the Program Boards.

Netherlands Institute for Advanced Study in the Social Sciences

between the Netherlands Institute for Advanced

Currently, the Program Boards within the natural sciences

and Humanities in Wassenaar (NIAS) and the Lorentz Center in

Study in the Social Sciences and Humanities in Was-

Leiden. The programme was launched to promote interdiscipli-

senaar (NIAS) and the Lorentz Centre in Leiden. The

sciences, mathematics and physics. The Center is also open to

nary research, which bridges the gap between the humanities and

programme was (formally) launched in 2006 to pro-

proposals from outside these fields. Proposals can be submitted

throughout the year and are submitted for review by the Program

the other. Lorentz Fellowships are awarded by NIAS to scholars

between the humanities and/or the social sciences on

Board three times per year.

whose research reaches across this boundary.

the one hand and the natural sciences on the other. Lorentz Fellowships are awarded by NIAS to scholars whose research reaches across this boundary. Project proposals that approach research topics from an inherently interdisciplinary viewpoint are welcomed.