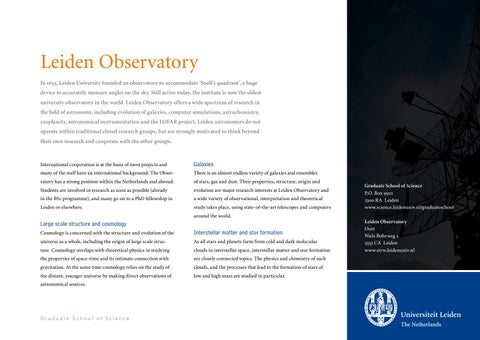 Leiden Observatory In 1633, Leiden University founded an observatory to accommodate â&#x20AC;&#x2DC;Snellâ&#x20AC;&#x2122;s quadrantâ&#x20AC;&#x2122;, a huge device to accurately measure angles on the sky. Still active today, the institute is now the oldest university observatory in the world. Leiden Observatory offers a wide spectrum of research in the field of astronomy, including evolution of galaxies, computer simulations, astrochemistry, exoplanets, astronomical instrumentation and the LOFAR project. Leiden astronomers do not operate within traditional closed research groups, but are strongly motivated to think beyond their own research and cooperate with the other groups.

International cooperation is at the basis of most projects and

many of the staff have an international background. The Obser-

There is an almost endless variety of galaxies and ensembles

vatory has a strong position within the Netherlands and abroad.

of stars, gas and dust. Their properties, structure, origin and

Students are involved in research as soon as possible (already

evolution are major research interests at Leiden Observatory and

in the BSc programme), and many go on to a PhD fellowship in

a wide variety of observational, interpretation and theoretical

universe as a whole, including the origin of large scale struc-

As all stars and planets form from cold and dark molecular

the properties of space-time and its intimate connection with

are closely connected topics. The physics and chemistry of such

gravitation. At the same time cosmology relies on the study of

clouds, and the processes that lead to the formation of stars of

the distant, younger universe by making direct observations of

low and high mass are studied in particular.

Stars are by themselves fascinating topics of study, in particular

Simulating the actual conditions in interstellar and circumstellar

space in completely controlled environments on earth is the aim

Leiden astronomers also study minor planets and comets in the

of Laboratory astrophysics and astrochemistry. The researchers

Solar System, as well as playing a growing role in the exciting

combine the analysis of astronomical observations with labora-

field of ‘exoplanets’ circling other stars.

tory experiments. Their state-of-the-art techniques allow them to simulate processes that take millions of years in space in a matter

A central role in modern astronomical research is played by computational astrophysics. It provides detailed simulations of

tions that are eleven light years away consist mainly

An essential requirement for successful astronomical research is

of old stars. These formations still look the same as

instrumentation. The cost and complexity of today’s telescopes

they did 2.5 billion years after the ‘big bang’ which

mean that instrumentation is developed in large consortia of

people at institutes around the world.

far away star formations. This led to the conclusion

Leiden Observatory plays an important role in many of these

that new stars formed rapidly when the universe

Dealing with extreme conditions is the main topic of high-energy

astrophysics, such as the behaviour of matter with typical indi-

instruments, and using them for research.

that caught the attention of many colleges. Existing

vidual particle energies higher than that found on the surface of

theoretical models were re-designed and adapted to

stars. The focus of the research is on physical processes associated

with compact objects such as neutron stars, white dwarfs and black holes.