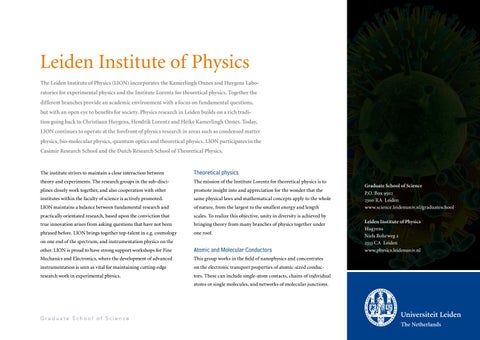 Leiden Institute of Physics The Leiden Institute of Physics (LION) incorporates the Kamerlingh Onnes and Huygens Laboratories for experimental physics and the Institute Lorentz for theoretical physics. Together the different branches provide an academic environment with a focus on fundamental questions, but with an open eye to benefits for society. Physics research in Leiden builds on a rich tradition going back to Christiaan Huygens, Hendrik Lorentz and Heike Kamerlingh Onnes. Today, LION continues to operate at the forefront of physics research in areas such as condensed matter physics, bio-molecular physics, quantum optics and theoretical physics. LION participates in the Casimir Research School and the Dutch Research School of Theoretical Physics.

The institute strives to maintain a close interaction between

theory and experiments. The research groups in the sub-disci-

The mission of the Institute Lorentz for theoretical physics is to

plines closely work together, and also cooperation with other

promote insight into and appreciation for the wonder that the

institutes within the faculty of science is actively promoted.

same physical laws and mathematical concepts apply to the whole

LION maintains a balance between fundamental research and

of nature, from the largest to the smallest energy and length

practically orientated research, based upon the conviction that

scales. To realize this objective, unity in diversity is achieved by

true innovation arises from asking questions that have not been

bringing theory from many branches of physics together under

phrased before. LION brings together top-talent in e.g. cosmology

on one end of the spectrum, and instrumentation physics on the other. LION is proud to have strong support workshops for Fine

Mechanics and Electronics, where the development of advanced

This group works in the field of nanophysics and concentrates

instrumentation is seen as vital for maintaining cutting-edge

on the electronic transport properties of atomic-sized conduc-

tors. These can include single-atom contacts, chains of individual atoms or single molecules, and networks of molecular junctions.

Studying the superconducting and magnetic properties of

The focus of this group is on quantum entanglement in various

materials in thin film form is the main focus of this group, with

systems that by themselves already have intriguing classical opti-

emphasis on the interplay between superconductivity and ferro-

cal properties, see the illustration. The research is fundamental

magnetism and on effects of correlated electrons, such as colossal

in nature and theory plays an important role, but the emphasis is

The ‘coldest place on earth’, as Leiden was referred to

Here the structure and dynamic behaviour of surfaces and

Here the physics of life processes is investigated, down to the

in 1908 when the legendary Kamerlingh Onnes liquefied

cellular and molecular level. Specific topics are research on

Helium-4, will become even colder if quantum physicist

purpose ‘scanning probe’ microscopes for the investigation of

Dirk Bouwmeester has his way. He is celebrated and

the formation of structures at surfaces, e.g. under conditions of

the cell membrane in relation to cell signalling and the organiza-

lauded for his challenging experiments, including on

deposition of atomic layers, for the study of gas-surface interac-

tion and reorganization processes of chromatin in cell nuclei.

This behaviour has so far only been demonstrated in

The research theme of this group is the resonant interaction of

individual atoms or molecules or clouds of such atoms

photons and condensed matter. The experimental approach is

or molecules. He uses a minuscule mirror linked to

Investigating slow flow and jamming of granulates, foams and

based on single-molecule optics and multi-frequency electron

macro emulsions is the main aim of this group. The focus is on

can only be studied at extremely low temperatures.

the interplay between mesoscopic organization and macroscopic

Bouwmeester devised a method of cooling the mirror to

by making use of the power that light can emit if it is reflected on an object. In combination with more conventional cooling methods he hopes to reach a temperature of one-millionth Kelvin. He is expecting to enter the regime for which Professor Roger Penrose has recently predicted that standard quantum mechan-

ics descriptions will start to fail.