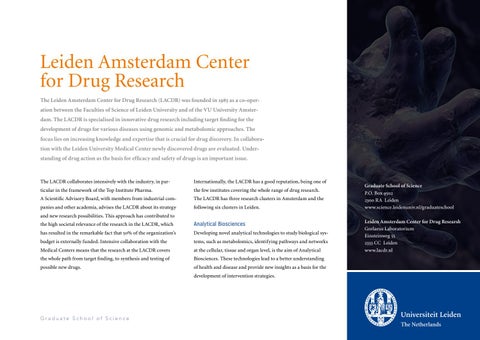 Leiden Amsterdam Center for Drug Research The Leiden Amsterdam Center for Drug Research (LACDR) was founded in 1985 as a co-operation between the Faculties of Science of Leiden University and of the VU University Amsterdam. The LACDR is specialised in innovative drug research including target finding for the development of drugs for various diseases using genomic and metabolomic approaches. The focus lies on increasing knowledge and expertise that is crucial for drug discovery. In collaboration with the Leiden University Medical Center newly discovered drugs are evaluated. Understanding of drug action as the basis for efficacy and safety of drugs is an important issue.

The LACDR collaborates intensively with the industry, in par-

Internationally, the LACDR has a good reputation, being one of

ticular in the framework of the Top Institute Pharma.

the few institutes covering the whole range of drug research.

A Scientific Advisory Board, with members from industrial com-

The LACDR has three research clusters in Amsterdam and the

panies and other academia, advises the LACDR about its strategy

and new research possibilities. This approach has contributed to the high societal relevance of the research in the LACDR, which

budget is externally funded. Intensive collaboration with the

tems, such as metabolomics, identifying pathways and networks

Medical Centers means that the research at the LACDR covers

at the cellular, tissue and organ level, is the aim of Analytical

the whole path from target finding, to synthesis and testing of

Biosciences. These technologies lead to a better understanding

of health and disease and provide new insights as a basis for the development of intervention strategies.

The study of heart disease, in particular on the mechanisms of

This research division focuses on ‘systems pharmacology’ with

atherosclerosis is the focus of Bio Pharmaceutics. By identifying

the aim to predict in vivo drug effects in man. To this end

genes and proteins involved in atherosclerosis, new targets for

mathematical models are developed which describe the actions of

the delivery of drugs and new techniques like gene therapy or

the drug in and on the integral biological system. These models

vaccination for preventing or treating cardiovascular disease can

constitute the scientific basis for the design of novel biologically

active compounds and their development into drugs. The interaction between small molecules (hormones,

Understanding of the interaction between a drug and its recep-

Important in drug development are the mechanisms of apoptosis

tors, transport proteins, etc) is the basis of life and

disease in every organism. It is now emerging that,

cluster. The adenosine receptor plays a central role in many of the

identifies potential new targets that can be used to pharmacologi-

next to ‘traditional’ receptor affinity, the total duration

projects. When such receptors bind adenosine, they can become

of this interaction, the so-called residence time, can

involved in muscle contraction and the demand for oxygen.

have a crucial impact on the effectiveness and selectivity of a drug molecule. Dynamic flow and metabo-

Finding new strategies for the delivery of biologically active

from reaching equilibrium conditions that are readily

compounds in the right dosage, at the right time and to the right

attained in the test tube (in vitro). The compounds’

place is the main topic of Drug Delivery Technology. The interac-

kinetic behaviour might in fact be the guiding principle

tions of these new strategies with biological systems, such as skin,

to obtain a desired and durable effect in vivo. Dr.

Laura Heitman investigates this, i.e., the kinetics of drug-receptor interactions to increase the effectiveness of future therapies. Ultimately, she thinks this will result in a higher success rate of drug candidates in clinical trials, which, for sure, will benefit patients.