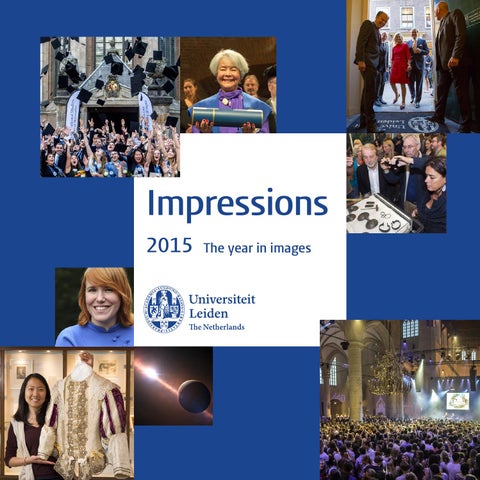 The year in images

Anton Corbijn was one of the star attractions at the Night of Arts & Science. This exciting scientific and cultural festival went the extra mile this year to mark the 440-year anniversary of the foundation of the University. This was the festivalâ&#x20AC;&#x2122;s third year, and it attracted a record number of 5,000 visitors.

440-YEAR ANNIVERSARY Two thousand students and staff celebrated the Universityâ&#x20AC;&#x2122;s anniversary in the Pieterskerk, with rap band De Jeugd van Tegenwoordig. It was a memorable evening: Leiden University was founded 440 years ago in this very church. 3

‘These artworks would not be out of place in biennales. The main location was the dazzlingly dilapidated Meelfabriek.’ – NRC Handelsblad Glowing reviews for the anniversary exhibition on Global Imaginations, an initiative of De Lakenhal Museum. The University collaborates with many museums, both in Leiden and further afield. 4

EXHIBITIONS An 18th-century PhD diploma, fragments from a bell that was destroyed in the Second World War, a print depicting the foundation of the University and a costume from the student masquerade: students of the masterâ&#x20AC;&#x2122;s in Arts & Culture put together the Celebrating Curiousity exhibition. 5

A FILM BY NICKOLAS BARRIS

Illuminating How Imagination And Innovation Advance The World WRIT TEN, DIRECTED, AND PRODUCED BY

Films have now been made of memorable events from the University’s history. The documentary ‘Einstein’s Light’ celebrates the friendship between the physicists Einstein and Lorentz who worked together in Leiden. In the films ‘Four Centuries of Freedom’, Professor Willem Otterspeer takes the viewer on a tour through four centuries of University history. 6

FILMS & APPS Did you know that the seeds of radio astronomy were sown in the Leiden Observatory? With the 27 new information boards placed throughout Leiden and the â&#x20AC;&#x2DC;Leiden Discoveriesâ&#x20AC;&#x2122; app, visitors can learn about the history of science in Leiden.

Statistician Aad van der Vaart was awarded the Spinoza Prize, the highest scientific distinction in the Netherlands. One of his areas of research is designing models that analyse which genes play a role in the development of cancer.

Bronze Age bling. During excavations in North Holland, archaeologists found fifteen bronze artefacts, all around 2,800 years old. From China to the Netherlands: hardly a year goes by without Leiden archaeologists making a major discovery. 10

DISCOVERIES Curator Mart van Duijn from the Leiden University Libraries discovered a notebook belonging to Jacob Cats that sheds new light on this famous statesman and poet. More discoveries are sure to follow in the Libraryâ&#x20AC;&#x2122;s Special Collections, a vast treasure trove of old manuscripts, prints, photos, drawings and maps from all corners of the world.

May we start a herb garden? That was the request made by scientists at the end of the 16th century. The town elders agreed. And in 2015 the oldest botanical garden in the Netherlands, the Leiden Hortus Botanicus, celebrated its 425-year anniversary. Children were invited to plant new bulbs in the garden. 12

MORE ANNIVERSARY CELEBRATIONS From helping fine-tune Einstein’s theory of relativity to making liquid helium. The Faculty of Science is 200 years old and can look back on a proud history. The key formula in Einstein’s theory, which has pride of place on the façade of the Boerhaave Museum, was unveiled by Robbert Dijkgraaf. More formulae will follow. 13

Leiden University College The Hague is five years old. The College offers intensive research and teaching programmes to 600 students from many different countries. The presence of the University underpins The Hagueâ&#x20AC;&#x2122;s role as international city of peace, security and justice. 14

CELEBRATIONS IN THE HAGUE Finally it’s time to throw those caps! The first 143 pioneers of International Studies are ready to take on the world. This English-taught programme has been running for three years and attracts students from all parts of the world. Every year the University awards diplomas to 3,500 bachelor’s students and an almost equal number of master’s students. 15

Students help to prepare the University Sports Centre for the emergency reception of 123 refugees. All went smoothly with the temporary accommodation in the USC thanks to the overwhelming efforts of staff and students.

REFUGEES The refugee crisis can sometimes cause tempers to flare. Leiden researchers are able to give different perspectives on the debate. Migration historian Leo Lucassen gave fifth-year high school students from the Stedelijk Gymnasium in Leiden background information on the migrant situation. 17

King Willem-Alexander and Queen MĂĄxima benefited from Leidenâ&#x20AC;&#x2122;s expertise on China. To prepare for their state visit to China, the royal couple met in Leiden with researchers and experts from the business and diplomatic sectors. Leiden is the only Dutch university to offer a sinology programme. 18

THE WORLD IN LEIDEN Ukrainian President Poroshenko called for a strong European Union. He was invited to deliver the Europe lecture by the Europe Institute at Leiden Law School.

Leiden revisited: offline or online. Many alumni return to their alma mater for a masterclass, a mentor programme or an online course. Young alumni can also visit the Coach CafĂŠ to brainstorm with professional coaches about their career.

ALUMNI ‘From now on, the focus will be on the patient.’ Afghan medical students gain new insights in Leiden thanks to the lustrum project ‘Give students a chance’. This was not the only successful crowdfunding activity: the Leiden Observatory gained a solar telescope and the Leiden Law School a Moot Court room. 21

University and city together commemorate their war dead in the Pieterskerk. Rector Carel Stolker honoured those who stood up for others. Looking to the future, he commented: â&#x20AC;&#x2DC;The University aims to train young people who will be able to make the right decisions later in their lives.â&#x20AC;&#x2122; 22

FREEDOM In the footsteps of the Soldier of Orange. The cast of the musical Soldaat van Oranje â&#x20AC;&#x201C; the most successful production in Dutch theatre history â&#x20AC;&#x201C; visited the house on the Rapenburg where resistance fighter Erik Hazelhoff Roelfzema lived when he was a student at Leiden University. 23

â&#x20AC;&#x2DC;Young people are increasingly distant from nature, but we can change that with botanical gardens.â&#x20AC;&#x2122; Nature conservationist Jane Goodall made this comment in the Leiden Hortus botanicus. She was presented with a photo of the orchid named after her.

Did you know that mothers are quicker to correct their children than fathers? And that children learn more from digital picture books than from traditional books? Leiden research at the Faculty of Social and Behavioural Sciences provides new insights into childrenâ&#x20AC;&#x2122;s upbringing and learning. 26

PHD RESEARCH Queen Juliana was not an unwilling victim of faith healer Greet Hofmans. In the mission to Uruzgan, politicians did not set specific goals, but simply jumped on the bandwagon. In their publications, researchers reconstruct political history and show trends. 27

The Leiden Teachersâ&#x20AC;&#x2122; Academy, an initiative of Vice-Rector Simone Buitendijk, now has 17 fellows. They are the drivers of innovative teaching methods at Leiden University.

INNOVATION IN TEACHING The Ministry of Education, Culture and Science approved the application for a masterâ&#x20AC;&#x2122;s programme in Pharmacy. The Leiden programme aims to differentiate itself by training patient-focused pharmacists. The University and the LUMC are hoping for accreditation in the short term so they can offer this new masterâ&#x20AC;&#x2122;s from the 2016-2017 academic year. 29

The whole world can follow free MOOCs (Massive Open Online Courses) offered by Leiden University: International Law in Action given by Larissa van den Herik (video still), Terrorism and Counterterrorism, Miracles of Human Language and Clinical Kidney Transplantation. Which will you choose? Every year, the range of MOOCs increases.

ONLINE LEARNING What made denim jeans such a success? Timo de Rijk and other Leiden professors gave lectures on this and other fascinating subjects at the Universiteit van Nederland, a platform for free online lectures.

It’s people that make the University what it is. Notable appointments in 2015: former ‘maths girl’ Ionica Smeets was appointed Professor of Science Communication; Piet Hein Donner, Vice-President of the Council of State, was this year’s Cleveringa Professor; North Korean dissident Jang Jin-sung became a guest professor; and Professor of Astrophysics Ewine Dishoeck is to become the new president of the International Astronomical Union. 32

DISTINGUISHED ACADEMICS In their inaugural lecture, new Leiden professors elaborate on their specialist field: Aske Plaat discussed how data science helped in the fight against Ebola. Job Cohen discussed how the distance between citizens and government can be reduced. Miranda van Eck is developing an innovative method for delivering medicines to clean blood vessels. 33

Three honorary doctorates were awarded on the University’s 440th anniversary:

Economist Peter Katzenstein is regarded as the most influential scientist in the area of comparative political economy and international relations.

Lilian Gonçalves-Ho Kang You was honoured for her dedication to human rights and in particular to women’s rights.

CEREMONIES â&#x20AC;&#x2DC;Universities are merely the guardians of an intellectual inheritance that they themselves did not create,â&#x20AC;&#x2122; commented Stefan Collini, Cambridge professor and guest speaker at the opening of the Academic Year. He expressed his doubts about marketisation and the preoccupation with efficiency at universities. 35

Around 5 December the discussion about the famous Dutch character â&#x20AC;&#x2DC;Zwarte Pietâ&#x20AC;&#x2122; (Black Pete) always flares up in the Netherlands. Judi Mesman, Professor of Diversity in Parenting and Development, is researching how young children see Zwarte Piet. She has discovered that children associate the character more with clowns than with people of colour. Rikki Holtmaat, Professor of International Non-discrimination Law, addressed the legal aspects of the Zwarte Piet issue in a debate at Leiden University. 38

RESEARCH Leiden research confirmed that the Dutch military used structural and excessive violence in Indonesia. In Soldier in Indonesia, historian Gert Oostindie described the war of decolonisation through the eyes of soldiers. Together with his students, he examined ego documents such as diaries and letters. 39

More than ten per cent of Leiden students take part in an Honours track. In the â&#x20AC;&#x2DC;Change Makersâ&#x20AC;&#x2122; Honours Class, students think up projects to improve the living environment in Leiden. They presented their ideas at a meeting in Leidenâ&#x20AC;&#x2122;s City Hall: more green roofs, an improved shopping street and a facelift for De Kopermolen shopping centre. 40

STUDENTS A very clever performance. Hedda de Roo, who is almost deaf-blind, graduated with distinction. Her research focused on mood disorders in the visually impaired. De Roo has set up a foundation to raise funds for further research on Usher Syndrome. 41

Who has a robotic work station? The Open Access Research Infrastructure portal of the Faculty of Science makes it easy to see what equipment is available, thus saving a lot of time and money. The University actively encourages open access initiatives. 42

IMPACT The Leiden Bio Science Park will become a real campus in the coming years, with more accommodation, shops, restaurants and attractive meeting places for scientists, students and business people.

Neuropsychologist Marcia Goddard, who won the Dutch final of the Famelab science competition, obtained her doctorate based on her research on autism. Every year some 400 people are awarded a PhD doctorate at Leiden University.

YOUNG TALENT Student entrepreneurs made a micro-3D image of King Willem-Alexander, the size of a grain of salt. The micro-3D printing technique devised by student company Idris Solutions also has many medical applications. On Kingâ&#x20AC;&#x2122;s Day, Mayor of Leiden Henri Lenferink was presented with the printed image by Willem te Beest, Vice-President of Leiden University. 45

The year in images A lot happens in a year at Leiden University. Our researchers make discoveries; our students follow lectures; we transfer our knowledge to society. We have an impact in the media and through our partnerships with companies, hospitals and other universities in the Netherlands and internationally. We receive guests who inspire us, and we celebrate special occasions and awards. We strive to create a good environment in which to work and study. This brochure gives an impression of 2015, the year that we celebrated the 440th anniversary of our University. Want to know more?

Impressions of 2015 was produced by:

Read about the stories behind the photos in 2015 at: www.universiteitleiden.nl/en/impressions2015