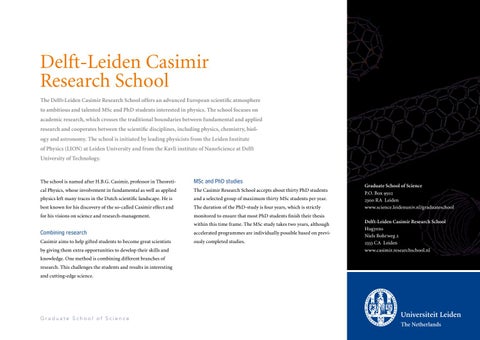 Delft-Leiden Casimir Research School The Delft-Leiden Casimir Research School offers an advanced European scientific atmosphere to ambitious and talented MSc and PhD students interested in physics. The school focuses on academic research, which crosses the traditional boundaries between fundamental and applied research and cooperates between the scientific disciplines, including physics, chemistry, biology and astronomy. The school is initiated by leading physicists from the Leiden Institute of Physics (LION) at Leiden University and from the Kavli institute of NanoScience at Delft University of Technology.

The school is named after H.B.G. Casimir, professor in Theoreti-

cal Physics, whose involvement in fundamental as well as applied

physics left many traces in the Dutch scientific landscape. He is

and a selected group of maximum thirty MSc students per year.

The duration of the PhD-study is four years, which is strictly

for his visions on science and research-management.

monitored to ensure that most PhD students finish their thesis within this time frame. The MSc study takes two years, although

accelerated programmes are individually possible based on previ-

by giving them extra opportunities to develop their skills and knowledge. One method is combining different branches of research. This challenges the students and results in interesting and cutting-edge science.

Fields of research and education

Research within Casimir benefits from the strong international

position of the Lorentz Center at Leiden and the Kavli Institute

of Nanoscience at Delft, leading to a flux of experienced and

talented post-docs and visiting scholars. At both universities all

lectures, seminars and colloquia are given in English and under-

that concentrates on a variety of dynamic surface and

Funding for PhD positions is usually provided by research-grants

interface phenomena, such as diffusion and growth,

Gateway to a research career

to individual professors. A PhD position is a full-time employ-

catalysis and nanotribology, with a strong emphasis

ment position with a salary that is comparable to entrance level

on the live observation of atomic-scale processes

to academic institutions abroad and to many small high-tech

salaries in industry. There is no tuition fee. The Casimir Research

under relevant conditions. Frenken is the Scientific

Director of the SmartMix Program on Nano-Imaging

ity, of which many are based in the Netherlands such as Philips,

ally gifted PhD students. In addition students are accepted who

under Industrial Conditions (NIMIC) and Program

bring their own financial support.

Director of the NanoNext program on Nanoinspection

For the MSc study scholarships are available through the

and Characterization. He has received several presti-

university, the Erasmus-Mundus programme, and for

gious national and international awards, such as the

In international rankings the cluster of researchers participating

European students through their countryâ&#x20AC;&#x2122;s student

Prize in 2006 and an ERC Advanced Research Grant

research universities, as testified by the publication and citation

record of the individual professors. Many professors have won

of the Dutch Royal Academy of Sciences. Frenken

prestigious European and national prizes and grants. They also

is co-founder of the spin-off company Leiden Probe