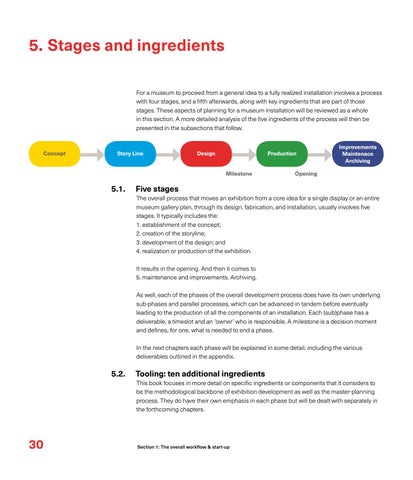 5. Stages and ingredients For a museum to proceed from a general idea to a fully realized installation involves a process with four stages, and a fifth afterwards, along with key ingredients that are part of those stages. These aspects of planning for a museum installation will be reviewed as a whole in this section. A more detailed analysis of the five ingredients of the process will then be presented in the subsections that follow.

The overall process that moves an exhibition from a core idea for a single display or an entire museum gallery plan, through its design, fabrication, and installation, usually involves five stages. It typically includes the: 1. establishment of the concept; 2. creation of the storyline; 3. development of the design; and 4. realization or production of the exhibition. It results in the opening. And then it comes to 5. maintenance and improvements. Archiving. As well, each of the phases of the overall development process does have its own underlying sub-phases and parallel processes, which can be advanced in tandem before eventually leading to the production of all the components of an installation. Each (sub)phase has a deliverable, a timeslot and an â&amp;#x20AC;&amp;#x2DC;ownerâ&amp;#x20AC;&amp;#x2122; who is responsible. A milestone is a decision moment and defines, for one, what is needed to end a phase. In the next chapters each phase will be explained in some detail, including the various deliverables outlined in the appendix.

This book focuses in more detail on specific ingredients or components that it considers to be the methodological backbone of exhibition development as well as the master-planning process. They do have their own emphasis in each phase but will be dealt with separately in the forthcoming chapters.