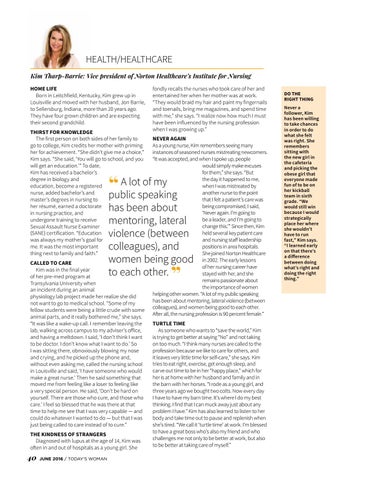 HEALTH/HEALTHCARE Kim Tharp-Barrie: Vice president of Norton Healthcare’s Institute for Nursing HOME LIFE Born in Leitchfield, Kentucky, Kim grew up in Louisville and moved with her husband, Jon Barrie, to Sellersburg, Indiana, more than 20 years ago. They have four grown children and are expecting their second grandchild. THIRST FOR KNOWLEDGE The first person on both sides of her family to go to college, Kim credits her mother with priming her for achievement. “She didn’t give me a choice,” Kim says. “She said, ‘You will go to school, and you will get an education.’” To date, Kim has received a bachelor’s degree in biology and education, become a registered nurse, added bachelor’s and master’s degrees in nursing to her résumé, earned a doctorate in nursing practice, and undergone training to receive Sexual Assault Nurse Examiner (SANE) certification. “Education was always my mother’s goal for me. It was the most important thing next to family and faith.”

fondly recalls the nurses who took care of her and entertained her when her mother was at work. “They would braid my hair and paint my fingernails and toenails, bring me magazines, and spend time with me,” she says. “I realize now how much I must have been influenced by the nursing profession when I was growing up.” NEVER AGAIN As a young nurse, Kim remembers seeing many instances of seasoned nurses mistreating newcomers. “It was accepted, and when I spoke up, people would simply make excuses for them,” she says. “But the day it happened to me, when I was mistreated by another nurse to the point that I felt a patient’s care was being compromised, I said, ‘Never again. I’m going to be a leader, and I’m going to change this.'” Since then, Kim held several key patient care and nursing staff leadership positions in area hospitals. She joined Norton Healthcare in 2002. The early lessons of her nursing career have stayed with her, and she remains passionate about the importance of women helping other women. “A lot of my public speaking has been about mentoring, lateral violence (between colleagues), and women being good to each other. After all, the nursing profession is 90 percent female.”

A lot of my “public speaking

has been about mentoring, lateral violence (between colleagues), and women being good to each other.

CALLED TO CARE Kim was in the final year of her pre-med program at Transylvania University when an incident during an animal physiology lab project made her realize she did not want to go to medical school. “Some of my fellow students were being a little crude with some animal parts, and it really bothered me,” she says. “It was like a wake-up call. I remember leaving the lab, walking across campus to my adviser’s office, and having a meltdown. I said, ‘I don’t think I want to be doctor. I don’t know what I want to do.’ So I was sitting there, obnoxiously blowing my nose and crying, and he picked up the phone and, without even asking me, called the nursing school in Louisville and said, ‘I have someone who would make a great nurse.’ Then he said something that moved me from feeling like a loser to feeling like a very special person. He said, ‘Don’t be hard on yourself. There are those who cure, and those who care.’ I feel so blessed that he was there at that time to help me see that I was very capable — and could do whatever I wanted to do — but that I was just being called to care instead of to cure.” THE KINDNESS OF STRANGERS Diagnosed with lupus at the age of 14, Kim was often in and out of hospitals as a young girl. She

TURTLE TIME As someone who wants to “save the world,” Kim is trying to get better at saying “No” and not taking on too much. “I think many nurses are called to the profession because we like to care for others, and it leaves very little time for self-care,” she says. Kim tries to eat right, exercise, get enough sleep, and carve out time to be in her “happy place,” which for her is at home with her husband and family and in the barn with her horses. “I rode as a young girl, and three years ago we bought two colts. Now every day I have to have my barn time. It’s where I do my best thinking. I find that I can muck away just about any problem I have.” Kim has also learned to listen to her body and take time out to pause and replenish when she’s tired. “We call it ‘turtle time’ at work. I’m blessed to have a great boss who’s also my friend and who challenges me not only to be better at work, but also to be better at taking care of myself.”

DO THE RIGHT THING Never a follower, Kim has been willing to take chances in order to do what she felt was right. She remembers sitting with the new girl in the cafeteria and picking the obese girl that everyone made fun of to be on her kickball team in sixth grade. “We would still win because I would strategically place her where she wouldn’t have to run fast,” Kim says. “I learned early on that there’s a difference between doing what’s right and doing the right thing.”