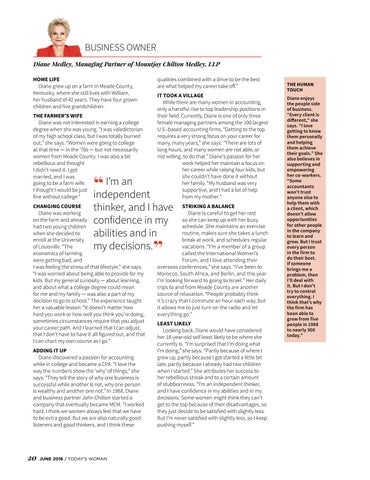 BUSINESS OWNER Diane Medley, Managing Partner of Mountjoy Chilton Medley, LLP HOME LIFE Diane grew up on a farm in Meade County, Kentucky, where she still lives with William, her husband of 42 years. They have four grown children and five grandchildren. THE FARMER’S WIFE Diane was not interested in earning a college degree when she was young. “I was valedictorian of my high school class, but I was totally burned out,” she says. “Women were going to college at that time — in the ‘70s — but not necessarily women from Meade County. I was also a bit rebellious and thought I didn’t need it. I got married, and I was going to be a farm wife. I thought I would be just fine without college.”

qualities combined with a drive to be the best are what helped my career take off.” IT TOOK A VILLAGE While there are many women in accounting, only a handful rise to top leadership positions in their field. Currently, Diane is one of only three female managing partners among the 100 largest U.S.-based accounting firms, “Getting to the top requires a very strong focus on your career for many, many years,” she says. “There are lots of long hours, and many women are not able, or not willing, to do that.” Diane’s passion for her work helped her maintain a focus on her career while raising four kids, but she couldn’t have done it without her family. “My husband was very supportive, and I had a lot of help from my mother.”

thinker, and I have confidence in my abilities and in my decisions.

CHANGING COURSE Diane was working on the farm and already had two young children when she decided to enroll at the University of Louisville. “The economics of farming were getting bad, and I was feeling the stress of that lifestyle,” she says. “I was worried about being able to provide for my kids. But my general curiosity — about learning, and about what a college degree could mean for me and my family — was also a part of my decision to go to school.” The experience taught her a valuable lesson: “It doesn’t matter how hard you work or how well you think you’re doing, sometimes circumstances require that you adjust your career path. And I learned that I can adjust, that I don’t have to have it all figured out, and that I can chart my own course as I go.” ADDING IT UP Diane discovered a passion for accounting while in college and became a CPA. “I love the way the numbers show the ‘why’ of things,” she says. “They tell the story of why one business is successful while another is not, why one person is wealthy and another one not.” In 1988, Diane and business partner John Chilton started a company that eventually became MCM. “I worked hard. I think we women always feel that we have to be extra good. But we are also naturally good listeners and good thinkers, and I think these

STRIKING A BALANCE Diane is careful to get her rest so she can keep up with her busy schedule. She maintains an exercise routine, makes sure she takes a lunch break at work, and schedules regular vacations. “I’m a member of a group called the International Women’s Forum, and I love attending their overseas conferences,” she says. “I’ve been to Morocco, South Africa, and Berlin, and this year I’m looking forward to going to Israel.” Her daily trips to and from Meade County are another source of relaxation. “People probably think it’s crazy that I commute an hour each way, but it allows me to just turn on the radio and let everything go.”

LEAST LIKELY Looking back, Diane would have considered her 18-year-old self least likely to be where she currently is. “I’m surprised that I’m doing what I’m doing,” she says. “Partly because of where I grew up, partly because I got started a little bit late, partly because I already had two children when I started.” She attributes her success to her rebellious streak and to a certain amount of stubbornness. “I’m an independent thinker, and I have confidence in my abilities and in my decisions. Some women might think they can’t get to the top because of their disadvantages, so they just decide to be satisfied with slightly less. But I’m never satisfied with slightly less, so I keep pushing myself.”

THE HUMAN TOUCH Diane enjoys the people side of business. “Every client is different,” she says. “I love getting to know them personally and helping them achieve their goals.” She also believes in supporting and empowering her co-workers. “Some accountants won’t trust anyone else to help them with a client, which doesn’t allow opportunities for other people in the company to learn and grow. But I trust every person in the firm to do their best. If someone brings me a problem, then I’ll deal with it. But I don’t try to control everything. I think that’s why the firm has been able to grow from five people in 1988 to nearly 300 today.”